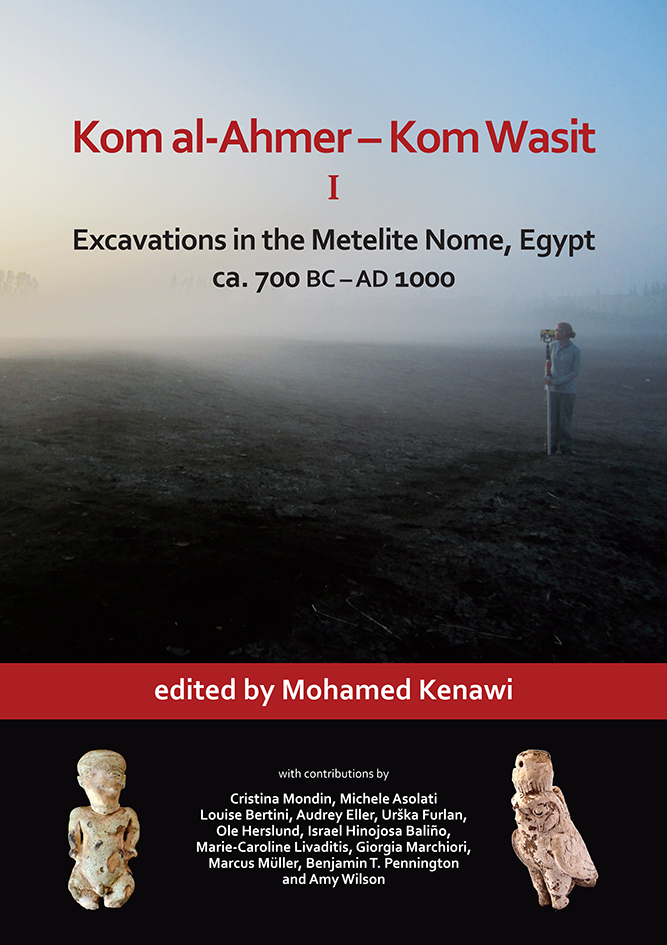 Every two months the Nile Scribes update our readers on the most recent Egyptological publications. From popular reads to peer-reviewed scholarship, we hope to illustrate the wide variety of topics discussed in Egyptology, and perhaps introduce you to your next read! Below are 11 books that were released late in 2019 (November-December).

Did you read our post on new books from late 2019? 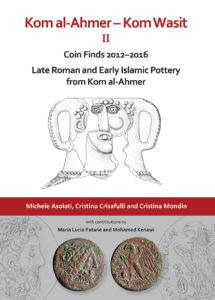 "Kom al-Ahmer and Kom Wasit were ideally placed to take advantage of the Mediterranean trade given their close proximity to the Egyptian ports of Thonis-Heracleion, Alexandria, and Rosetta during the Hellenistic, Roman, Late Roman, and early Islamic period. The social and economic vitality of the sites has been revealed during investigations undertaken by the Italian archaeological mission between 2012 and 2016 and published in Kom al-Ahmer – Kom Wasit I: Excavations in the Metelite Nome, Egypt ca. 700 BC – AD 100 [NS: see below].This volume presents over 1070 coins (ca. 310 BC–AD 641) and 1320 examples of Late Roman and Early Islamic pottery, testimony to the considerable commercial activity in the region during the Late Antique period. Kom al-Ahmer and Kom Wasit emerge as centers of an exchange network involving large-scale trade of raw materials to and from the central and eastern Mediterranean." 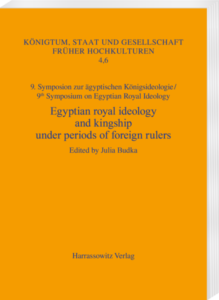 Egyptian Royal Ideology and Kingship under Periods of Foreign Rulers

"The ninth symposium on Egyptian Royal Ideology in Munich in 2018 was dedicated to the ancient Egyptian kingship under foreign rulers. Case studies from the first millennium BC addressed questions of peculiarities and/or similarities in the kingship of foreigners, who ruled Egypt in particular during the so-called Late Period and in Ptolemaic times.Thirteen contributions deal with shared characteristics and specific differences; new results from current field work are integrated into these analyses. The case studies from Egypt and the Sudan illustrate recent research areas such as the investigation of the general dynamics of cultural contacts, which take into account the acceptance, but also adaptations and rejections of cultural markers. In addition to epoch-spanning studies on ancestor worship, costumes and titles, new research on the ideology, religion and the building program of the Twenty-fifth Dynasty is in the foreground. Other contributions deal with the Persian period (Twenty-seventh Dynasty) and the royal ideology in Hellenistic Egypt under the Ptolemies." 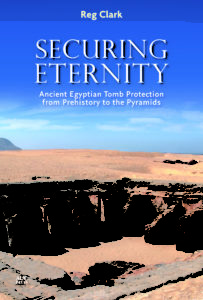 "The ancient Egyptian tomb evolved rapidly over a period of about 2,500 years, from a simple backfilled pit to an enormous stone pyramid with complex security arrangements. Much of this development was arguably driven by the ever-present threat of tomb robbery, which compelled tomb builders to introduce special architectural measures to prevent it. However, until now most scholarly Egyptological discussions of tomb security have tended to be brief and usually included only as part of a larger work, the topic instead being the subject of lurid speculation and fantasy in novels, the popular press, and cinema.In Securing Eternity, Reg Clark traces in detail the development of the Egyptian royal and private tombs from the Predynastic Period to the early Fourth Dynasty. In doing so, he demonstrates that many of the familiar architectural elements of the Egyptian tomb that we take for granted today in fact originated from security features to protect the tomb, rather than from monumental or religious considerations." 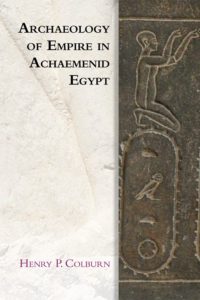 Archaeology of Empire in Achaemenid Egypt

"Previous studies have characterised Achaemenid rule of Egypt either as ephemeral and weak or oppressive and harsh. These characterisations, however, are based on the perceived lack of evidence for this period, filtered through ancient and modern preconceptions about the Persians. Henry Colburn challenges these views by assembling and analyzing the archaeological remains from this period, including temples, tombs, irrigation works, statues, stelae, sealings, drinking vessels and coins. By looking at the decisions made about material culture – by Egyptians, Persians and others – it becomes possible to see both how the Persians integrated Egypt into their empire and the full range of experiences people had as a result." 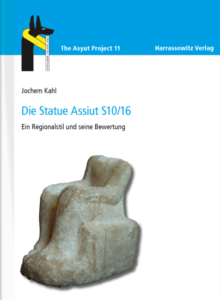 "Since 2003, the German-Egyptian "Asyut Project" has been working on Gebel Asyut al-gharbi, the burial ground in the central Egyptian city of Asyut. During the course of these excavations, a statue was unearthed in 2010, which in terms of its type and style has characteristics specific to the region. It belongs to a group of eleven other, previously known statues of the so-called First Intermediate Period and the Middle Kingdom, which have often been negatively evaluated in secondary literature. In this investigation, Jochem Kahl discusses sites, dating, workshops, users and the function of these statues, as well as how they are assessed within the field of Egyptology. He thereby demonstrates that the statues were placed in tombs both at the end of the First Intermediate Period and in the early Middle Kingdom and that their production was not subject to political conditions or technical shortcomings. The work is completed by comprehensive photographic documentation of all of the statues currently accessible within this group." 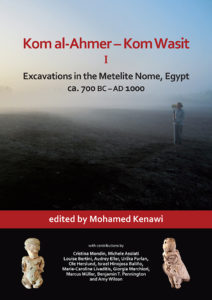 "In 2012, fieldwork began at two large sites in the Beheira Province in the western Nile Delta: Kom al-Ahmer and Kom Wasit (ancient Metelis). Being close to the important ports of Thonis-Heracleion, Alexandria, and Rosetta meant that they had been ideally placed to take advantage of the trade between the Mediterranean and Egypt. The sites are being thoroughly investigated to reveal their archaeological significance. Kom al-Ahmer – Kom Wasit I Excavations in the Metelite Nome, Egypt presents the results of the Italian archaeological mission between 2012 and 2016. It provides details of the survey and excavation results from different occupation phases. A complete town beneath the Nile silt was revealed using a combination of modern scientific techniques. Hellenistic houses and a temple enclosure wall were investigated at Kom Wasit; while at Kom al-Ahmer, a Late Roman house, an amphora storage building, a cistern and an early Islamic cemetery were revealed.Dating from the Late Dynastic to the Early Islamic period, the remains found at Kom al-Ahmer and Kom Wasit demonstrate for the first time the rich archaeological heritage of this region." 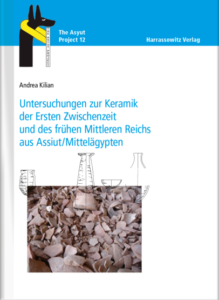 "The long-term collaborative project "The Ancient Egyptian Necropolis of Asyut: Documentation and Interpretation" was funded by the German Research Foundation between 2005 and 2019. In Volume 12 of the Asyut Project, Andrea Kilian takes a look at the ceramic finds from the First Intermediate Period and the Middle Kingdom (c. 2200-1700 BC), which were found in 16 shaft and rock tombs in the area of the Gebel Asyut al-Gharbi. Aside from the first-ever documentation and evaluation of the previously unpublished material, the body of the vessel types of Asyut are compiled and then analysed in great detail in comparison to those from other regions of the Nile Valley. Through this supra-regional typological-comparative approach, the material is explored in its entire breadth and integrated into a chronological context. In addition, considerations regarding the structural composition of the individual ceramic trench ensembles and the functional areas of the ceramic offerings are included as part of the investigation. With the inclusion of material from older excavation which is located today in many European museums, the evaluation consists of an additional validation. The study opens and contextualises new material from the underrepresented findings of Middle Egypt and thus contributes to a deeper understanding of the development of ancient Egyptian vessels." 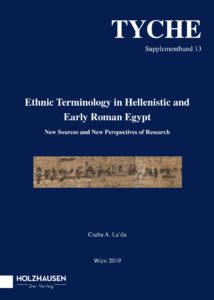 "Hundreds of different ethnic terms occur in well over a thousand papyri, ostraca and inscriptions in Greek, Demotic and hieroglyphic Middle Egyptian in reference to around 3000 specific individuals. The precise meaning of ethnic terms is however often problematic. Ethnic terminology thus presents papyrologists, epigraphers, ancient historians and legal historians with some of the most puzzling problems of interpretation. In addition, ethnic terms are fundamental to a better understanding of a wide range of problems of social and cultural history, including immigration, ethnicity and social and cultural integration. The first ever comprehensive collection of ethnic terminology was published by the present author in his book Foreign Ethnics in Hellenistic Egypt in 2002. This volume represents an update of his original work, offering a critical collection of the sources that appeared since its publication, with an introductory study of ethnic terminology in the multilingual documentary evidence from Hellenistic and early Roman Egypt."

The Ornamental Calcite Vessels from the Tomb of Tutankhamun

"At the time of the clearing of the tomb of Tutankhamun Howard Carter and his team made meticulous handwritten notes of every single object found. Yet a full scholarly publication of the majority of them has yet to be undertaken. This book presents a catalogue of the ornamental calcite vessels with an introduction and a discussion of their artistic merit, at times disputed, as well as their purpose during the life of Tutankhamun and after his death. Most of them were designed to contain scented unguents so precious that they proved irresistible to robbers in antiquity. Their intricate design combining utilitarian use with symbolic forms and ornamentation paired with a near perfect state of preservation makes them rare examples of royal arts and crafts of late 18th dynasty Egypt." 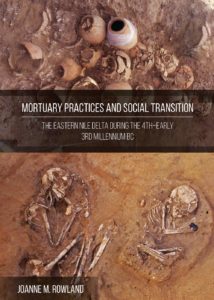 Mortuary Practices and Social Transformation: The Eastern Nile Delta During the 4th–early 3rd Millennium BC

"This latest volume in the Studies in Funerary Archaeology series presents an Egyptian case study from the 4th millennium BC within the framework of wider studies and analyses of early complex societies. Mortuary Practices and Social Transformation is concerned with means by which to approach mortuary data – especially when there is a considerable lack of settlement data – to consider both what it can tell about the living world, but also what it can tell us about relationships between the dead and the living. The volume gives an overview of the period prior to and during the rise of the Egyptian state and presents a clear methodology for approaching mortuary data, including the importance of chronological divisions by which researchers can have the opportunity to monitor change over time. Joanne Rowland embeds discussion of the results of her analysis within a comparison of various aspects of mortuary data throughout Egypt from the Neolithic until the Early Dynastic period (late 6th millennium–c. 2900 BC) emphasising aspects of regional differentiation, as well as local environmental niches, and addressing questions as to the actual purpose for the foundation of these sites, their function(s) and reasons for their variable longevity. This in-depth study is the first monograph dealing with data from the cemetery of Kafr Hassan Dawood, and, as such, presents a section on the ceramic chronology for the site, within the framework of other Predynastic and Early Dynastic Egyptian sites." 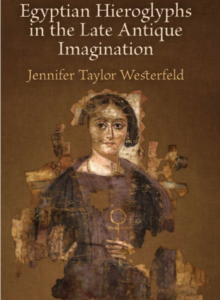 "Westerfeld examines the ways in which hieroglyphs are deployed in the works of Eusebius and Augustine, to debate biblical chronology; in Greek, Roman, and patristic sources, to claim that hieroglyphs encoded the mysteries of the Egyptian priesthood; and in a polemical sermon by the fifth-century monastic leader Shenoute of Atripe, to argue that hieroglyphs should be destroyed lest they promote a return to idolatry. She argues that, in the absence of any genuine understanding of hieroglyphic writing, late antique Christian authors were able to take this powerful symbol of Egyptian identity and manipulate it to serve their particular theological and ideological ends."