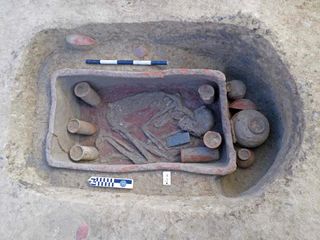 This individual had a number of grave goods. It appears that the red pigment ochre covered part of the grave when the deceased was laid to rest.
(Image: © Egyptian Ministry of Antiquities)

Archaeologists have discovered 83 graves from ancient Egypt, but the human remains weren't interred in sarcophagi, as is often the case. Rather, the deceased were buried in clay coffins, according to the Egyptian Ministry of Antiquities.

Eighty of the graves date to the civilization of Bhutto, or Lower Egypt, during the first half of the fourth millennium B.C. The burials were found during archaeological excavations in the Dakahlia governorate of northern Egypt, not too far from the Mediterranean Sea.

The team also found three graves from the Naqada III period, which lasted from about 3200 to 3000 B.C. It's unusual to find clay coffins in Dakahlia from Naqada III, Mostafa Waziri, the secretary-general of the Supreme Council of Antiquities, said in a statement. In other parts of Egypt during that time, elite people were usually buried in mud-brick tombs or wood coffins, while poorer people were often buried in shallow holes, according to University College London.

The Naqada culture is old, even by Egyptian standards, dating to predynastic Egypt during the Chalcolithic era, or Copper Age. The new discovery indicates that many people lived in this area at that time, said Waziri, who suspects that even more graves will be found at the site.

The excavated Naqada III graves contain a trove of artifacts. So far, excavators have discovered handmade pottery, oyster shells, a bowl in the shape of a tilapia and two bowls — one rectangular and one circular — of kohl, a cosmetic that Egyptians painted around their eyes, as well as a kohl plate, Ayman Ashmawy, head of the Egyptian Antiquities Sector at the Supreme Council of Antiquities, said in the statement. 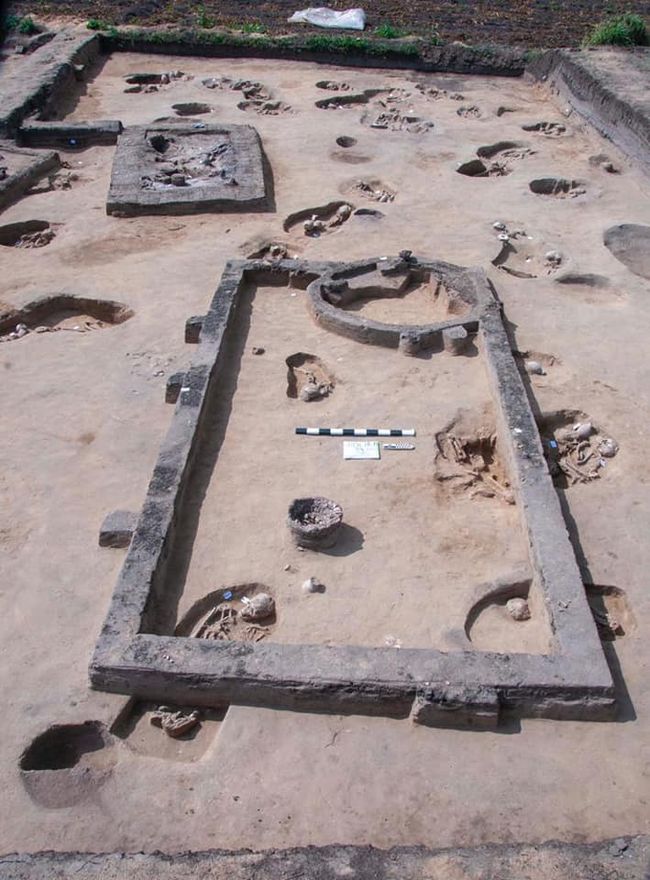 A view of the excavated graves. (Image credit: Egyptian Ministry of Antiquities)

Some of the artifacts are much younger; a handful date to the Hyksos period, or about 1630 to 1523 B.C. These artifacts included ovens and stoves, the remains of mud-brick building foundations and four mud-brick burials, which held the remains of a child and three adults, Fathi Al-Talhawi, head of the excavation and director general of the Dakahlia Antiquities, said in the statement.

Other grave goods from this period included pottery, stone utensils, and amulets and ornaments made of semiprecious stones and gold.