Iconic Tahrir Square to be turned into open-air museum 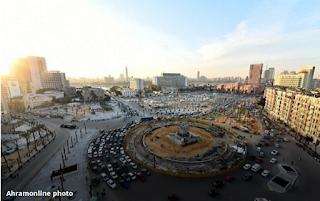 Cairo: Work is progressing full swing to turn the iconic Tahrir Square into an open-air museum in Cairo.

More than fifty engineers and a thousand labourers in yellow hard hats have been working 24-hour shifts in a bid to finish the renovation of the famous landmark.

The government plans to turn the 150-year-old square into an open-air museum, with the project set to be finished by the end of this month, with 85-90 per cent of the planned work already completed.

The move is a major part of the development scheme for the Egyptian capital, which aims to transform it into a touristic archaeological destination, especially with the state's plan to relocate government offices from downtown Cairo to the new administrative capital from June.

Since December, engineering equipment including cranes, forklift trucks, and excavators have been installed in various parts of the area by Arab Contractors, according to Ahramonline.

The state-run company is executing the renovation, along with the ministries of tourism and antiquities, culture, local development, and housing, and the administration of Cairo governorate, among others.

The strategy aims to beautify the famous site, which has been at the centre of many historical and political events in the country's modern era, via changing the appearance of the main buildings and embellishing it with a host of archaeological items.

The finished square will host an open-air pharaonic exhibition or historical pathway that the public can view, functioning as an extension of the Egyptian Museum, which is located on the northern boundary of the square.

The development work covers seven spots in Cairo's largest square, with the most important the roundabout at its centre, known as Al Sanya in Arabic. Here, an obelisk and four ram-headed sphinxes will be the prime attractions.

Another key part of the work is the re-assembly of a 17-metre-tall, 90-tonne-obelisk from the era of Ramses II, which was found in the form of eight large blocks at San El Hagar archaeological site in Zagazig city in Egypt's Nile Delta. Four sphinxes from Luxor's Karnak Temple have also been transferred to the site.

The square will also be dotted with many pharaonic-era plants such as date trees, olive trees, fig trees, and carob trees, in addition to papyrus, for which the ancient Egyptian civilisation was famous. Around 10,000 lighting units will be installed in the square.