Will Egypt sell its artifacts to boost economy? 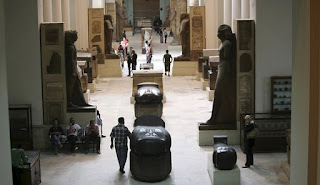 Will Egypt sell its artifacts to boost economy?

CAIRO — What if Egyptians woke up in the morning to breaking news that Egypt's national antiquities were being sold at international auctions?

"Would you agree on selling Egyptian artifacts to foreign countries as a means to solve the country's economic crisis?" This question was posted March 23 on the official Facebook page of the TV show "Al-Howar Mostamer," which airs on a station owned by Ahmed Abu Hashima, a businessman affiliated with the ruling regime. The question caused a huge public response.

The Facebook post called on Egyptian social media users to give their opinion on the matter, sparking an extensive attack, especially since this issue is being discussed in tandem with the agreement on maritime border demarcation that transferred the ownership of Tiran and Sanafir islands to Saudi Arabia.

This wasn't all. On March 29, in an article published on the United Arab Emirates' The National news website, US economist Patrick Werr said, "Egypt is overflowing with antiquities. … Why not package up some of these artifacts and organize their sale to foreigners or Egyptians …? The government could add tens of millions of dollars to its coffers each year."

Werr, who has lived in Egypt for 20 years, continued, "It is almost certain — though difficult to prove — that the bulk of these [recovered] artifacts were taken out of Egypt illegally."

Of note, Werr started his article by writing, "Here is an idea that will almost certainly not fly politically, but economically [it] makes a lot of sense."

This is not the first time that the issue of selling or renting out Egyptian antiquities has been raised. A related controversy erupted in 2013 under the rule of the Muslim Brotherhood when the Ministry of Antiquities received a bid by Qatar to "rent" Egypt's national treasures for a period of three years in return for $200 billion. A similar offer was made by UAE company Proact World to rent three major archaeological sites in Egypt: the citadel of Salah al-Din in Cairo, Qaitbay Castle in Alexandria and Luxor Temple.

The Egyptian government turned down both offers since it categorically refuses to discuss the idea of ​​selling antiquities or renting them internationally, as it believes they are part of the Egyptian identity.

Shaaban Abdel-Gawad, the director general of the Department of Recovered Antiquities within the Ministry of Antiquities, told Al-Monitor that the government believes discussing this idea in the media is an insult to Egypt and to a 7,000-year-old civilization.

Ever since Egypt amended in 2010 Law No. 117 of 1983 on the protection of antiquities, the government has banned the possession, sale, granting and display of antiquities outside the country without the supervision of the relevant archaeological bodies.

For decades, antiquities were commonly traded without being criminalized by law, which led to the smuggling of countless pharaonic pieces out of the country. In addition, former Egyptian kings and presidents have offered numerous artifacts as gifts to foreign missions and governments.

Abdel-Gawad said the Ministry of Antiquities has recovered around 7,500 artifacts from Europe over the last 15 years, while hundreds of pieces are still being exhibited in international museums in countries that do not criminalize trade in antiquities. He noted that the government is unable to recover these antiquities due to lack of proof in its official records.

Pharaonic artifacts are being sold more at international auctions these days. The most recent sale was at an auction at Sotheby's in Hong Kong on April 4, where ancient Egyptian relics were sold for $175,345.

The UNESCO Convention to ban the importation, export, transfer and illicit transfer of cultural property issued in 1970 and ratified by Egypt hinders the Egyptian government's efforts to recover its artifacts and prevent their sale at international auctions, since the convention grants state parties the right to claim its artifacts stolen before 1970.

According to Riad Abdel Salam, a member of the parliamentary Tourism and Civil Aviation Committee, both the government and the parliament assert that it is impossible for Egypt to sell its own artifacts. Abdel Salam told Al-Monitor that this proposal has been refused, saying that "no member of parliament will dare submit such a proposal to the parliament for discussion."

He said, "When any piece of antiquity leaves the country to be sold at a global auction this means that it will never be recovered by Egypt. Artifacts should be used to revive our tourism sector."

While some believe selling national artifacts could end the stifling economic crisis hitting Egypt, others disagree. Abdel-Raheem Rayhan, an archaeological expert and the director general of the Ministry of Antiquities' Archaeological Research and Studies and Scientific Publishing Department in the Sinai Peninsula, offers another solution.

He told Al-Monitor he believes Egypt's economic problems can be solved by developing a comprehensive methodology to promote all forms of tourism in Egypt, from archaeological tourism to leisure tourism. For this purpose, he called on the government to allocate a huge budget for the development of archaeological sites and the establishment of services and facilities in the surrounding area.

Abdel Salam offered alternative marketing solutions whereby archaeological museums are properly exploited through the establishment of specialized channels in various foreign languages and the issuance of a specialized magazine for Western tourists. He also urged the government to conclude contracts with international companies specialized in this field to promote Egypt's artifacts in local exhibitions.

The Egyptian government does not seem to be persuaded by the huge economic return it may reap from selling the wealth of the ancestors.

"Even if the expected economic gains were achieved and the sale proved to be beneficial to all Egyptians, national artifacts and treasures will remain priceless," Abdel-Gawad said, noting that such a step would encourage illegal archaeological excavations and fragment society instead of fixing the economy.