Inside a Dominican Archaeologist's Drama-Filled Quest to Find Cleopatra's Tomb 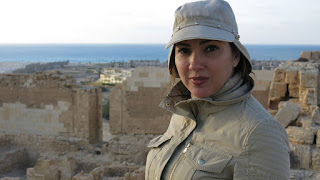 Of all of ancient Egypt's kings and queens, none has captured the world's imagination like Cleopatra. At one time the most powerful woman in the world, Cleopatra was the last active pharaoh of ancient Egypt, ruling after Alexander the Great's death. While her dramatic story has been famously rendered in art for millennia (her love affairs with Julius Caesar and Mark Antony, her suicide by snake bite), today barely any traces of her existence survive. For centuries, archaeologists have been unsuccessfully searching for Cleopatra's tomb, but the final resting place of Egypt's last queen was believed to have vanished from history. Now, that may change thanks to Kathleen Martinez, a criminal lawyer from the Dominican Republic turned unorthodox archaeologist.

Kathleen Martinez's back story could give Indiana Jones a run for his money. Despite having no field experience, she left a 20-year law career behind in order to undertake an Egyptian expedition for Cleopatra's tomb. "From a very young age, I recall wanting to be an archaeologist, but my parents discouraged me from pursuing my interests seeing as how there was no archaeological precedent in the Dominican Republic," Martinez told PBS.

Martinez's theory led her on a drama-filled quest to Egypt that could have been ripped from the plot of a Hollywood movie.

Though she was dissuaded from pursuing her childhood dream, Martinez developed a lifelong fascination with Cleopatra. As she held down a day job – running a law practice – she began researching Cleopatra in her free time. "I [approached] Cleopatra's life as a case," she said, explaining how she leveraged her criminal law training to analyze all the ancient texts she could get her hands on. Eventually, after obtaining a Master's in archaeology, Martinez came up with a radical new theory about where Cleopatra was laid to rest.

While many scholars believe that Cleopatra was buried in the ancient city of Alexandria (which sank into the Mediterranean sea more than one thousand years ago), Martinez theorizes that she may have been buried beneath a temple, as part of a deliberate strategy to prevent her body from falling into the hands of the Romans. Martinez's theory is based on an important fact that she believes other historians have ignored: Cleopatra considered herself the living form of the goddess Isis, and her lover Mark Antony, the god Osiris. Her suicide by snake bite, Martinez believes, could have been the beginning of a religious rite – and an indication that Cleopatra wanted to die and be buried as a goddess in a temple. 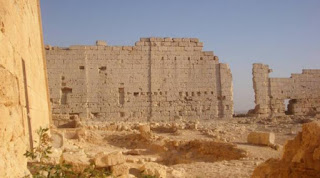 Internal view towards South of the Osiris Temple in Taposiris Magna.

Martinez's theory has since led her on a drama-filled quest to Egypt, one that could have been ripped from the plot of a Hollywood movie. As soon as she touched down in Cairo, her search was fraught with obstacles – starting with her hours-long detention by immigration authorities who were skeptical of her provenance. "The Dominican Republic didn't have an embassy in Egypt, and a place with no embassy in Egypt didn't exist," Martinez explained at a presentation of her work in October. "Therefore, the Dominican Republic didn't exist to them."

Martinez hoped to prove that Latin American archaeologists can make their mark on Egyptology.

Hours later, when she was finally released, she faced an even bigger challenge: how would she get permission from the Egyptian government to visit the temples she wanted to investigate, many of which were not open to the public? As luck would have it, the Spanish interpreter she'd hired happened to know the secretary for Zahi Hawass, the then-Minister of State for Antiquities Affairs. This is how, less than a day later, Martinez was given an appointment with him, and granted a two-month approval to visit the temples. Using maps of Isis and Osiris temples she had developed in the DR, Martinez visited each site, hoping it would unearth a clue. Finally, with time dwindling, she found one at the Taposiris Magna Temple, about 50 kilometers west of Alexandria. There was just one problem: she, a rookie archaeologist with no backing, team, or funding, would need to secure an extended excavation license. These licenses are highly competitive; with thousands of applications submitted, roughly 150 are granted – usually to established research universities. 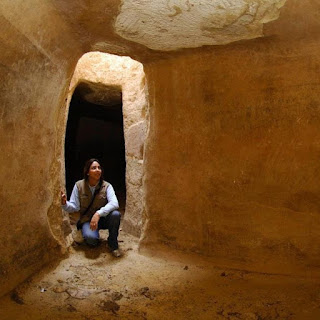 Dr.Kathleen Martinez at one of the chambers discovered in the temple Taposiris Magna.

Having come so far, Martinez worried she might have hit a wall. "I sat against the remains of a column and I cried," she recounted to the University of Pennsylvania's Knowledge at Wharton. "Why? I am a citizen of the Dominican Republic. I am not a famous archeologist. I don't have a big school like Harvard behind me. I thought, 'I have come this far but no one will listen, no one will give me permission.' Then I stopped crying and thought, 'I have to fight until they tell me yes, if it takes the rest of my life.'" Martinez was determined to push ahead, not just for her own dream, but because she wanted to prove that Latin American archaeologists can make their mark on Egyptology too. 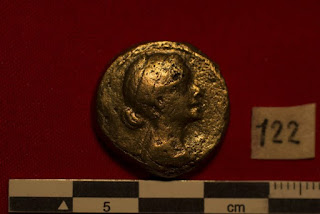 A bronze coin portraying Cleopatra discovered by Dr Kathleen Martinez and her team at Taposiris Magna.

Returning to the Dominican Republic, Martinez gained the support of the minister of Foreign Affairs, who appointed her the nation's first Minister of Culture to Egypt. With the backing of a Santo Domingo university, she returned to Egypt to make her case to Hawass, and within a few weeks was granted a two month excavation license. In fact, Martinez had persuaded Hawass of the merits of her theory, and he has since become one of her biggest allies. With his support, Martinez soon made a major discovery – finding six burial chambers in the Taposiris Magna Temple. These types of chambers had never before been found in temples, and their discovery has changed what was known about the architecture of temples and tombs. At the site, workers also found over 600 artifacts, including 40 coins bearing the image of Cleopatra and Mark Antony, an alabaster bust of Cleopatra, and other items that give credence to Martinez's "crazy" theory. 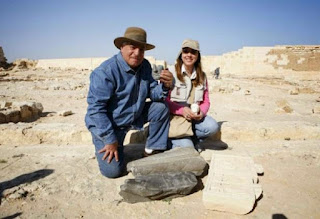 Today, Martinez's search continues, but she has already made history. "If we discover the tomb of Mark Antony and Cleopatra, it would be the most important discovery of the 21st century," Hawass told reporters. And even if they don't, Martinez believes her efforts will still have been worthwhile. "In the beginning, people laughed at us and made fun," she says. "Now, they respect the work we do. It's been worth it."

This post, profiling unconventional genius, was developed in partnership with National Geographic. National Geographic's new TV series 'Genius' follows the brilliant scientist Albert Einstein through the ups and downs of his life, from failing to get his doctorate to developing the general theory of relativity.