The purrrplexing story of the British Museum cats

This is the story of how the British Museum became a cat haven, and how they eventually came to be on the Museum payroll, thanks in large part to a British Museum cleaner affectionately referred to as the 'Cat Man'.

The British Museum has been open to the public since 1759 – that's 258 years! That makes it older than Napoleon (we have one of his death masks, which you should definitely check out), older than the steam locomotive, it even predates the entire industrial revolution. But my favourite thing that the Museum is older than? Sandwiches. Definitely sandwiches.

Why am I talking about the origin date of sandwiches in a blog about cats? Well they're related, if not immediately obviously. When you're a Museum employee, you get access to many of the areas the public aren't allowed to go into, and this is one of my favourite things about working here. Because those areas are littered with outdated signs and staff notices from the Museum's history. They frequently make little to no sense at first glance, because what they relate to has long since passed, but if you dig a little deeper, they tend to have fantastic stories attached to them. And there's one in particular that had me so purrrplexed (sorry), that I had to find out more about it. It reads: 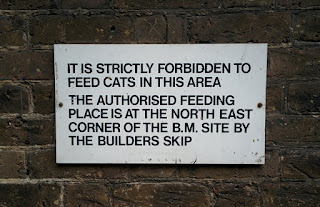 In my three years of working at the Museum I've never even seen a tin of cat food, let alone an actual cat that could be fed in an official or unofficial cat feeding area. In order to sate my cat-like curiosity I started asking some of the longer serving members of staff if they knew anything about the Museum cats.

They did. It turns out that between the 1970s and 1990s the Museum had between 4 and 7 cats – depending on what year we're talking about – kept to deter mice and rats. 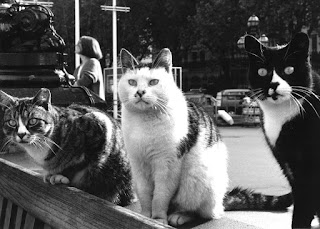 The Museum cats frequently featured in newspaper articles. A feature on the British Museum cats having their Christmas dinner became a worldwide sensation in the 1980s, and in 1993 the New York Times had a double page spread on how some of our cats had developed the ability to catch pigeons in mid-air. All this proved that the cat feeding sign I had witnessed wasn't an 18th-century Museum employee's idea of a practical joke, but it didn't tell me how the cats got the British Museum in the first place. That question proved a little harder to answer.

Next I went down to the Museum's central archives where Archivist Francesca Hillier handed me a large box labelled: 'Cats' Welfare Society 1907–1993'.

The box was filled with half-conversations, chains of internal memos that came to an abrupt halt, references to telephone calls that weren't recorded and a few newspaper clippings. It was incomplete, but workable. With a little time I started to piece together the events that seemed to lead to the official Museum cats. What I discovered was more than a little surprising.

It appears that the cats were not in fact invited to inhabit the Museum, but found their way to the site quite of their own accord. Sometime before 1960 a colony of stray cats (a frequent problem throughout London in the 1950s–1970s) found its way to the Museum and continued to breed and cause a nuisance for some 15 years. They were smelly, antisocial and at one point may have numbered over 100. 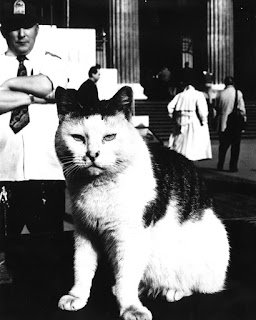 Rex the 'Cat Man' and Maisie

The Museum eventually decided to remove their feline inhabitants, and a dedicated group of volunteer staff brought the population down to just six (all through very humane means). At this point a cleaner called Rex Shepherd (who became known to staff as the Cat Man) formed the Cat Welfare Society. For the next 20 years, Rex and the Society kept the Museum cat population healthy and at a manageable number. 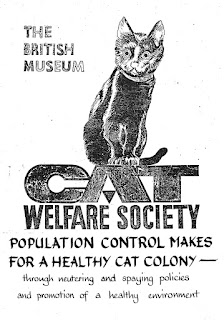 This group of cats consisted of Suzie, who spent much of her time prowling the Museum's colonnade waiting to catch pigeons in mid-air, Pippin and Poppet who could roll over on command (all you had to say was 'sayonara') and Wilson, named after the British Museum director Sir David Wilson (who did not like cats). The cats even became an international phenomenon thanks to the coverage they received from the media during the 80s and 90s. But for all that coverage, the only reason I now know anything about them is thanks to an outdated sign stuck to a wall en route to the Museum canteen.

No cats were harmed in the making of this podcast.