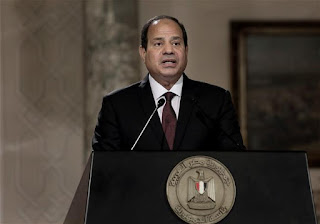 The move comes just days after President Abdel-Fattah el-Sissi publicly criticized media coverage of the deadly suicide bombings in the cities of Tanta and Alexandria north of Cairo, which killed at least 45 and injured scores. In televised comments just hours after the attacks, he said the media must keep the country's national interests in mind.

It raises concerns that the government plans to tighten its already firm grip on the media, in a country that already locks up journalists and has fallen to the bottom of press freedom indexes since el-Sissi overthrew the country's first democratically-elected president, a divisive Islamist.

Two of the men — Makram Mohamed Ahmed, the former journalists' union head and Karam Gabr, former editor-in-chief of a state-owned newspaper — were driven from their positions amid the 2011 uprising that ended Mubarak's 29-year reign. The third is Hussein Zein, who held a senior post at the Radio and Television Union in the Mubarak era.

El-Sissi made the picks for the chairmen of the Supreme Council for Media Regulation, the National Press Authority, and the National Media Authority based on a law that was passed in December, but which received new impetus after last Sunday's killings.

"The boards in their current form are dominated by executive authority representatives, to guarantee its control over state-owned and private media," said journalist Karem Mahmoud, who helped draft an early version the law.

But Mahmoud said that original draft it had since been amended by ministers and members of a heavily pro-el-Sissi parliament to further pare back press freedoms. The state-run al-Ahram newspaper said all but four of the 596-member unicameral legislature voted in favor.

"This isn't the law the committee proposed," Mahmoud told The Associated Press, noting that the final version had only 89 articles as opposed to an original 230 — many of which had sought to lay out freedom of speech in line with Egypt's constitution.

Mahmoud believes the move, along with a similar draft bill that would allow el-Sissi to pick the nation's highest judges, would give the executive branch the authority "to silence any dissenting voice."

AddThis Sharing Buttons
Share to Google+Share to EmailShare to TwitterShare to Google BookmarkShare to More
Copyright 2017 The Associated Press.