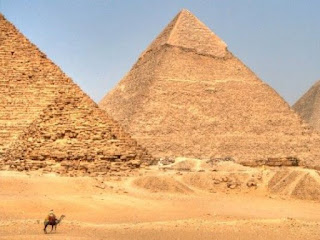 Hend El-Behary
Egypt administrative prosecution referred 12 former employees of the Antiquities Ministry to trial in a disciplinary court for allegedly allowing individuals from a German expedition to steal samples from the Egyptian Great Pyramid Khufu.
An official press statement said that the employees let the German group steal samples from the red ink used in writing King Khufu's name in a small room on top of the king's burial chamber inside the Great Pyramid, known as King Khufu's cartouche, using a sharp machine that caused noticable scratches and damages.
The statment pointed out that the employees comitted several crimes in the period from July 14 to November 9, 2013; the crimes included allowing the German group to steal fargments from the walls and the ceiling of the main burial chamber of King Khufu's tomb using a sharp machine that also caused some scratches and abrasions to both ceiling and walls.
Moreover the Germans were allowed to enter the five chambers above the main burial one and take photos inside it without permission.
One of the crimes was that five people were let to visit the Great Pyramid without following the permission they had from the General Secretariat of the Supreme Council of Antiquities that said only three Germans can enter the place. Plus, the authorization papers did not include the names of another two Egyptians, the director of the tour organizing company and the chief inspector of scientific affairs antiquities who accompanied the German group into the great pyramid.
"The defendants did not perform the work entrusted to them accurately and safely, did not preserve the property and funds of the place they work at, did not observe the maintenance and violated all the financial and legal rules," the statment said.
The story was revealed in November 2013 when a documentary entitled "The Cheops Project" was uploaded on YouTube showing two German researchers Dominique Goerlitz and Stefan Erdmann from the University of Dresden during a secret tiring tour inside Khufu's Pyramid to reveal the secrets of the Pyramid's construction.
During the documentry the researches showed how it was hard to reach Khufu's cartouche;The researchers analyized a sample of the cartouche in a German laboratory after stealing it and  claimed that Khufu had not build the Great Pyramid and the ink used in the cartouche is not old and it's much younger than the age of the pyramid itself by centuries, which confirms that the pyramid does not return to Khufu and who built it in reality were the ancient Jews because they lived in Egypt during the period of the Great Pyramid construction.
When the documentry came to light, the Egyptian Ministry of Antiquities realized the issue and took strict legal actions against the researchers who were put under Egypt airport's watchlist by the interpol; the tourist company that helped them and the University as well were both faced with legal accusations.
Moreover, the Egyptian Government has suspended any scientific cooperation with Dresden University and the German laboratory that analyzed the stolen fragments.