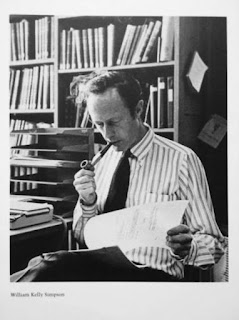 Courtesy of the Department Of Near Eastern Languages & Civilizations

Simpson, a professor emeritus of Egyptology, served on Yale's faculty for 46 years and retired in 2004. But Simpson was best known to current Timothy Dwight students as the owner of "Llamaland," the upstate New York estate Simpson opened to Timothy Dwight freshmen for their annual class retreat each fall, complete with a pair of llamas, a swimming pool and a priceless collection of art and artifacts.

In a Friday email to Timothy Dwight students, Head of College Mary Lui said the college community will deeply mourn his loss. Though no replacement location for the annual freshman retreat has been found, both Lui and Timothy Dwight Dean Sarah Mahurin are looking for possible options.

"TD students and alumni alike recall spending that magical sunny late summer day in Llamaland with great fondness," Lui said. "We all mourn the loss of William K. to the greater TD community."

Apart from his time at Yale, Simpson served for nearly 20 years as curator of Egyptian and ancient Near Eastern art at the Boston Museum of Fine Art, taught at Harvard University and the University of Pennsylvania and lectured at the Institute of Advanced Studies at Princeton University, the College de France in Paris and the Calouste Gulbenkian Foundation in Lisbon. Simpson's friends and colleagues in the Department of Near Eastern Languages and Civilizations expressed their sadness at the loss of a gifted scholar.

"He was an inspiring teacher, erudite, witty and generous with his knowledge of an impressive range of philological, historical and art historical topics," said Karen Foster GRD '76, a lecturer in the departments of Near Eastern Languages and Civilizations and History of Art as well as one of Simpson's graduate students.

Foster's husband, Benjamin Foster, also knew Simpson well, calling him "one of the greatest Egyptologists of his generation." Benjamin Foster added that Simpson's efforts built the Yale Egyptology program from a marginal department into one of the nation's best programs.

Lui said that she does not know when the tradition of Llamaland began, though students past and present have been impressed by Simpson's extensive collection of artifacts and have cherished the brief hiatus from campus each fall.

Jeffrey Brenzel, former head of Timothy Dwight College, said that when he took the helm of the college in 2010, Llamaland sounded like an "improbable tradition," and after visiting Simpson's estate his theory was confirmed.

"I think Kelly Simpson loved two things: remembering his long stay in TD as a residential fellow and seeing the new students gathered around his pool and walking his grounds. He was gracious and friendly and lovely in every way," Brenzel said. "Every year when the buses pulled up, Kelly would come out, meet everyone and give a little speech before the picnic started. In these latter years, he was frail and could not stand for long. But the speech was a wonderful way for freshmen new to the community to meet its past. I loved it."

Simpson is survived by one of his daughters, Abigail Rockefeller Simpson. His wife, Marilyn Ellen Milton, passed away in 1980.

The Near Eastern Languages and Civilizations Department is planning to hold a memorial event to honor Kelly.