Antiquities lab on the Giza Plateau 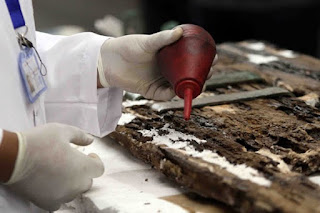 Antiquities lab on the Giza Plateau

A few metres from the southern side of the Great Pyramid on the Giza Plateau outside Cairo, Egypt's first on-site laboratory is set to restore the 1,264 pieces of the ancient Egyptian Pharaoh Khufu's second solar boat, which has remained in situ for 4,500 years after it was buried to ferry him to eternity.

The second boat was discovered along with the first inside two pits neighbouring each other in 1954 when Egyptian archaeologists Kamal Al-Mallakh and Zaki Nour were carrying out routine cleaning on the southern side of the Great Pyramid.

The first boat was taken out of its pit to be restored and reassembled, and it is now on display at a special museum on the plateau. The second one is still in situ, but a Japanese-Egyptian team have been working hard to remove it from its pit and restore and reassemble it in order to put both boats on display at the planned Grand Egyptian Museum (GEM) overlooking the plateau.

The team led by Japanese Egyptologist Sakuji Yoshimura cleaned the pit of insects and inserted a camera through a hole in the chamber's limestone ceiling in order to examine the boat's condition and determine appropriate methods to restore it.

Images were obtained showing layers of wooden beams and timbers of cedar and acacia wood, as well as ropes, mats and the remains of limestone blocks and small pieces of white plaster. Bassel Yoshimura, Cairo bureau chief of the Institute of Egyptology at Waseda University in Japan, told Al-Ahram Weekly that a large hanger had been constructed over the area surrounding the second boat pit to protect it, with a smaller hanger inside to cover the top of the boat itself.

The hangers have been designed to protect the wooden remains during analysis and treatment, he said. A temporary magazine and laboratory have also been established inside the hanger to use during the restoration process, and state-of-the-art equipment including the temperature and humidity controls vital to the preservation of the wooden boat's remains has been installed.

A laser scanning survey has documented the area and the wall between the Great Pyramid and the boat pit. A solar electricity system has been installed at the site in order to produce energy for eventual chemical treatment.

According to Yoshimura, while the filling around the sides of the covering stones was being cleaned, the team uncovered the cartouche of Khufu inscribed on one of the blocks and beside it the name of Djedefre. This meant that the boat had been constructed during the reign of the Pharaoh Khufu and not, like the first boat, during the reign of Djedefre, he said.

"In 2011, the Japanese-Egyptian team lifted aside the first stone block, weighing 16 tons, to start uncovering Khufu's second boat and began the restoration work," Yoshimura told the Weekly. The on-site team had developed a new technique to lift the blocks that involved inserting a chemically-treated piece of wood beneath the covering stone and lifting it, he said.

Eissa Zidan, director of restoration for the project, said that the beams, timbers, ropes and oars of the boat were buried in sand on 13 levels that housed approximately 1,264 pieces of the boat. In order to rescue the wooden beams, which are in a very bad state of conservation due to the leakage of air inside the pit as well as rain water and the infestation of insects, the Egyptian-Japanese team had created the on-site laboratory to provide first aid, he said.

"Establishing the lab was necessary to rescue the fragile large beams of the boat," Zidan, told the Weekly, adding that the lab was 45 square metres in area and equipped with state-of-the-art equipment. The lab had cost some LE1 million and had been funded by the Japanese International Cooperation Agency and the Higashi Nippon International University in Japan.

Eissa said that work on the on-site lab had started in January this year and the building had been inaugurated this month. The archaeological team for the restoration of the second solar boat consists of 12 Egyptian, two Japanese and one American national.

According to Kanan Yoshimura, a conservator on the Japanese team, the restorers are using fillers and soft materials and the lab's temperature and humidity are being adjusted to simulate the atmosphere in the pits where the pieces of the boat were stored for centuries.

"We will restore all of the boat, as every piece of it is important," Yoshimura commented.