For Ancient Egyptian Pharaohs, Life Was a Banquet, But the Afterlife Was the Greatest Feast of All | Travel | Smithsonian


For Ancient Egyptian Pharaohs, Life Was a Banquet, But the Afterlife Was the Greatest Feast of All

Life after death for the Ancient Egyptian elite included lots, and lots, of food

In Ancient Egypt, inanimate objects—particularly images created for tombs or temples—were believed to contain latent magical powers. What was drawn or etched on stone could later come into being in another cosmos. That is why so many pharaonic works of art show tables piled high with food. Nobody wanted to go hungry in the afterlife. On the contrary, the ancient Egyptians hoped they would enjoy the greatest feast of all in that other realm.

The steward Mentuwoser, who lived roughly two millennia before Christ, was surely wishing for such a feast. He had worked for King Senwosret I, overseeing his linens, his granaries, and his domesticated animals—cows, goats, donkeys, and, most interesting, pigs. (Many people think that pigs were not eaten in ancient Egypt, but they most definitely were.) Those loyal efforts did not go unrecognized. The pharaoh had a gorgeous limestone stela made for Mentuwoser, to be placed at Abydos, where Osiris, the god of the afterlife, presided.

The stela, now on display at the Metropolitan Museum of Art, in New York City, shows Mentuwoser seated in front of a table bearing a massive amount of food. At the bottom of the heap is the head of a calf—its meat young and tender, delicious to eat. Also stacked there are onions, a squash, at least two types of bread, a calf's leg, and a lotus flower to delicately scent the food. Lotuses are mildly hallucinogenic: When mixed into wine, the wine became more potent. They were also powerful in another way: In the afternoon and evening, the floating lotus flower descends underwater, rising again with the sun at dawn and reopening its petals—a quintessential symbol of rebirth and resurrection, associated with the sun god.

Mentuwoser's daughter is shown smelling a lotus flower, and his father is presenting him with two vessels, one with food and another filled with beer. His son, in the upper right, calls forth his father's spirit to enjoy the offerings. The Egyptians believed you could take everything with you when you died, and they wanted to have a perfect afterlife, with as much stuff in it as possible. At the cult center of Abydos, Osiris could watch over Mentuwoser, and pilgrims could say blessings, make offerings, or pour libations before the stela. In this way the gods would be satisfied and Mentuwoser would continue the blissful existence shown on the carving into eternity.

Sometimes scenes of hunting, netting fish, herding and butchering animals, threshing grain and other farming activities were carved or painted directly onto tomb walls, as in the exquisite murals at the ancient burial grounds at Saqqara near Cairo. The goal was for each tomb to be a beautiful recreation of a person's world in this life. Food—plenty of food—was a key part of that. One tomb in Luxor even includes a recipe for a special kind of cake made with tiger nuts. Egyptians still munch the nuts when they're in season, but as far as I know, the cake recipe is no longer in use.

In addition to 2-D depictions, artisans carved 3-D models of food preparation and feasting. Some of the best examples were found in the early 20th century by a team from the Metropolitan Museum of Art, in a secret chamber at the tomb of Meketre, who lived shortly after Mentuwoser. These dioramas show vignettes of food preparation: cattle being counted, then force-fed and fattened, then slaughtered and cured. The culminating scene shows two boats, one carrying Meketre, his guests, and a small orchestra, the other carrying cooks and helpers. The cooks are preparing roasted goose, and their boat has wine, beer, and enough other supplies for a perfect outing. Helpers pass bread from one boat to the other.

Some ancient Egyptians may have doubted the power of a simple carving or even a model to keep them fed in the afterlife. They took matters a step further and mummified actual food to bring with them. Sometimes these feasts were more lavish than anything people would actually enjoy in daily life. The menu might include salted poultry, red meats (made in a way similar to ham, but of beef), and a kind of dried meat, resembling modern biltong, that had been salted, strung up, and hung to dry in the desert sun. On some of this mummified meat you can still see the little indentations that the string made. Other meals were precooked with oils, flavorings, and herbs to make them more delicious. King Tutankhamun's tomb included more than 30 boxes of mummified victuals, perhaps because he was a teenager with a healthy appetite.

For someone like myself, an Egyptologist who has studied these food mummies in detail, it's hard not to wonder what they taste like. At a museum in the United States, I once got the opportunity to find out. I was looking at food mummies from 1500 B.C. and noticed that a few bits had fallen off. So I asked permission to take a nibble, and the official I was with said, "Go ahead!" It was very chewy, a bit like salty cardboard—hardly the eternal delicacy that people in a desert kingdom imagined more than three millennia ago. 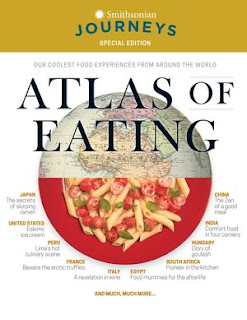 Every culture has its own cuisine, and every cuisine its own secret history. This special issue of Journeys provides an in-depth look at food and culinary culture around the globe, including in-depth stories and favorite recipes.