Egypt unveils giant restored statue of Ramses II
April 19, 2017 | 7:33 PM
by Reuters
Tourists and Egyptians look at a huge granite statue of King Ramses II (C) after the completion of the restoration work, hours after the Egyptian Ministry of Antiquities revealed the contents of a Pharaonic cemetery on the western bank in Luxor, south of Cairo, Egypt April 18, 2017. Picture taken April 18, 2017. REUTERS/ Sherif Fahmy 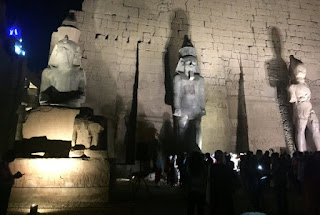 Luxor (Egypt): Egypt has unveiled a massive granite statue of Ramses II, the most powerful and celebrated of the ancient Pharaohs, after completing its restoration.


Standing 11 metres tall and weighing 75 tonnes, the statue was presented in a floodlit ceremony at the Luxor Temple on the banks of the Nile on Tuesday evening. When the statue was discovered between 1958 and 1960, it was in 57 pieces.

Ramses II, also known as Ramses the Great or Ozymandias, reigned more than 3,000 years ago. He led several military expeditions and expanded the Egyptian Empire to stretch from Syria in the north to Nubia in the south.

The statue was displayed just hours after archaeologists unveiled the tomb of a nobleman from more than 3,000 years ago, the latest in a series of discoveries that Egypt hopes will revive a tourist business hit by political instability.

"What we're happy with is that (the kind of tourists drawn to) classical Egypt, Luxor, Aswan, Nile cruises... are back to normal levels again," said Hisham El Demery, chief of Egypt's Tourism Development Authority.

However, an attack on Tuesday claimed by IS near St. Catherine's Monastery - one of the world's most important Christian sites - revived fears for the tourist sector there. The attack left one police officer dead and four others wounded.