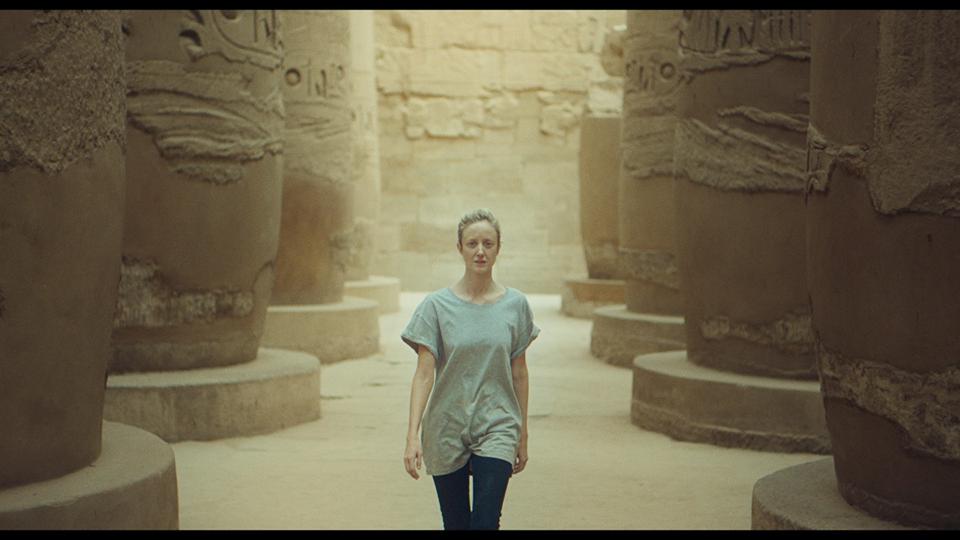 Luxor, a captivating new romantic drama starring Andrea Riseborough (Birdman, Battle of the Sexes, Shadow Dancer) and Karim Saleh (Counterpart, Munich, Transparent), had a sold-out UK premiere in London this week and is now available for online viewing. Written and directed by Zeina Durra, the film premiered at Sundance in January 2020 and will open in the United States December 4th.

It has been a decade since Zeina Durra's first feature The Imperialists Are Still Alive! premiered at Sundance to rave reviews. Luxor is a followup that was certainly worth waiting for. The story about a doctor who reassesses her life and rekindles a lost love, while on leave from a war zone, is subtle, engaging and beautifully shot. Exceptional cinematography by Zelmira Gainza brings the Valley of Kings and the extraordinary city of Luxor, with its ancient ruins and temples wonderfully to life. The film acts as a powerful travelogue, sure to tempt the viewer to visit the burial place of King Tut.

Luxor presents the existential journey of Hana (Andrea Riseborough) who arrives at the glorious Winter Palace hotel (the former winter residence of the Egyptian royal family and where Agatha Christie wrote Death on the Nile) for an indefinite leave from her work on the Jordanian-Syrian border as a doctor in a war trauma unit. No details of her stressful work are revealed in the film apart from a comment that no one should have to see what she's seen. While there are no flashbacks to war-torn Syria, Hana's body language and facial expressions make the horrors she's witnessed abundantly clear. While trying to seek mental solace and to work out what to do next, Hana tours the city and visits ancient monuments. By chance, while on a ferry, she encounters Sultan (Karim Saleh), an archaeologist with whom she had a relationship twenty years ago and clearly hadn't forgotten about.

The film includes many scenes without dialogue where Hana appears alone, in taxis, or wandering the streets and historic monuments of Luxor. Hana's solitude is emphasised by the camera and the viewer must pick up the visual clues to understand her mindset. Even when she visits ancient sites where Karim is working, there are often extended periods of silence. Contemplation is central in this film; the image tells the story and is driven forward by Riseborough's and Saleh's remarkable acting ability. Director Zeina Durra explains that she "felt that the imagery of the digs and sites, was a strong non-verbal way of addressing Hana's existential crisis, something that will stay in the audience's subconscious. I wanted to make a film that transports people to this amazing place but I didn't want them to escape into some kind of orientalist fantasy, I wanted the themes of our times to be present."

Zeina Durra has a Bosnian–Palestinian mother and Jordanian–Lebanese father and this heritage made her comfortable setting her film in an Arab country. Her background no doubt helped with the incredibly tight schedule; the entire film was shot in eighteen days and at some locations, scenes had to be completed in less than 30 minutes. Luxor is a city of archaeology. The excavation of the ancient sites is so similar to psychoanalysis and works in a very visual way, the digging up, the excavation. The pain that Hana carries after witnessing atrocities in Syria first hand, weighs her down and makes her ask a lot of existential questions. So what better place to find answers than in one of the world's oldest civilizations. Durra says that "the unsettling darkness of our times" made her want to write a "story set in a place which is a monument to past civilisations whose central beliefs, temples and obsession with the afterlife, were all rooted deeply in the idea of light overcoming darkness." Beautiful and evocative, Luxor deserves to be seen at the cinema on a large screen but with the current global pandemic in play, this of course isn't possible. In the meantime, online viewing is essential and rewarding.

Modern Films' UK release of Luxor is online 6 November. The film will be released digitally by Samuel Goldwyn in the United States 4 December.

Joanne Shurvell
Posted by Glenn Meyer at 12:43 AM