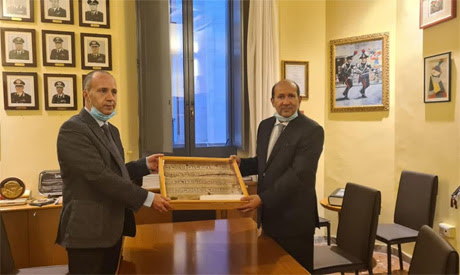 After almost two years, Egypt has received - from Italy - a part of a sarcophagus that was stolen and illegally smuggled out of the country.

Egypt's Ambassador to Italy Hisham Badr received the artefact on Thursday at the headquarters of the anti-cultural property unit of the Italian gendarmerie "Carabinieri", and it will soon be returned back to its homeland.

Supervisor General of Antiquities Repatriation Department, Shaaban Abdel-Gawad said that the piece has been seized by the relevant security authorities in the Cagliari region in Italy in 2018, and as soon as the piece was seized by the Italian authorities, all necessary measures were taken between the ministry of tourism and antiquities and the international cooperation office at the Egyptian attorney general's office. A request for legal aid was then sent to the Italian authorities.

The recovered piece is part of a wooden coffin lid. It appears to be the middle part of the body of a coffin covered with a layer of plaster. It is decorated with four bands of hieroglyphic writing with black ink dating back to the 'Late Period'.