N.L. Holmes on Royal Egyptian Society and the Future of Archaeology | | BookTrib

N.L. Holmes on Royal Egyptian Society and the Future of Archaeology 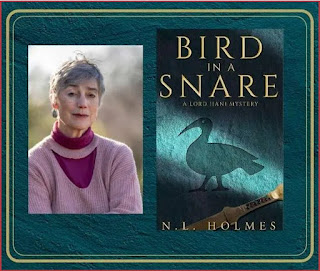 While most people's impression of ancient Egypt is usually limited to spring holiday viewings of The Ten Commandments or grade-school museum field trips, our fascination endures. Anyone who has ever wondered about what life was like among the pharaohs will delight in the Lord Hani Mysteries by N.L. Holmes. The historical series kicks off with Bird in a Snare, a rich and revealing introduction to the political intrigue of royal Egyptian society.

Authenticity shines in this unique choice for a murder mystery. That's no surprise — N.L. Holmes is the pen name of a professional archaeologist who has participated in excavations in Greece and Israel and taught ancient history and humanities at the university level for many years.

The protagonist of Bird in a Snare is Hani, a scribe, emissary and self-anointed "minor functionary." He finds himself dispatched to a northern vassal state to perform a year-long murder investigation on behalf of the king, Amen-hotep III. Each of the suspects Hani considers offer both motive and alibi, and includes the commissioner, various nobles and even the king of Egypt's son and heir. Talk about a delicate situation!

Hani is a family man with little ambition other than to provide for his brood, but when the king dies and his only son is recruited by fanatical religious leaders, he finds himself torn by divided loyalties. Can he solve the mystery and protect those he loves? For more on the book, read our review here.

In this Q&A, Holmes tells us more about writing Bird in a Snare, and what makes ancient Egypt so fascinating even today.

Q: Why did you choose the reign of the Egyptian pharaoh Akhenaten as a setting for a mystery series?

A: It's a period of unimaginable changes and upheaval, which makes an exciting backdrop. And there are mysteries — in some cases we're not even sure who the rulers are, or how they're related, or even if they're male or female. That leaves a lot of wiggle space for a fiction writer. Plus, we have the Amarna Letters, a series of foreign correspondences in which the real Hani figures frequently. Ready-made adventures!

Q: Lord Hani is a really warm and touching character, especially in terms of his attachment to his family. How historically accurate is this? Is he an aberration, or does he embody the spirit of the age?

A: The Egyptians were very devoted to their families. Children were loved, and families were often large. Women were far more respected there than in most ancient societies. Although it was patriarchal, women had equal rights under the law and entered many professions; they could be in charge of men or even be kings. That being said, there must have been people who were not good family men. Lord Ptah-mes's broken family is an example of the other end of the spectrum.

Q: Your characters seem incredibly alive, and I'm wondering about your process. As you write, do you focus more on plot or character?

A: I absolutely focus on character. The plot unrolls because the characters act in a certain way — because they're that kind of person. In the one novel where I ended up with a wholly failed plot, it was because I never had a grip on the characters. They were a little caricaturish, and so they couldn't lead me along. That one needs rewriting completely.

Q: Can you tell us about your wildest experience on an actual archeological dig? Did any of your real-life experiences inform this plot?

A: Wild experiences (ahem)? I guess hiking and hitchhiking all over the island of Crete, which gave me a sense of how laborious travel was in the old days. I once spent the night in the Kamares Cave on the top of Mt. Ida, which had been a Minoan sanctuary. But the only thing that really plays into the plot of any of the Lord Hani novels is a shipping vase we found that may have had orpiment in it. That's an arsenic crystal ground into a yellow pigment.

Q: What artifacts do you hope future archeologists will find from the historical era of your series, and what conclusions do you hope they'll draw from them?

A: I hope we find the tomb of Akhenaten, and more objects that clarify the murky succession. What little we know has been pieced together from small archaeological finds that mention regnal dates or something. Let's find a clear statement about whether Akhenaten and his father ruled jointly for a while. Or when the episode about a widow seeking a Hittite to marry took place, so we know which queen it was. There's so much to be learned.

N.L. Holmes is the pen name of a professional archaeologist who received her doctorate from Bryn Mawr College. She has excavated in Greece and Israel, and taught ancient history and humanities at the university level for many years. She has always had a passion for books, and in childhood, she and her cousin (also a writer today) used to write stories for fun. She splits her time between Florida and northern France, where she gardens, weaves, plays the violin, dances and occasionally drives a jog-cart. And reads, of course.