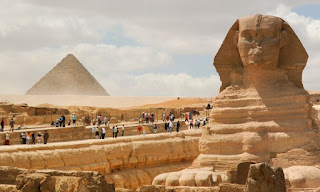 The Great Sphinx and Pyramids of Giza – Wikimedia Commons

CAIRO – 21 July 2017: The knife attack that killed two German female tourists and injured four others in the Red sea town of Hurghada did not affect tourism in Egypt.
Experts believe that the attack is not likely to deal a serious blow to the sector, especially that it was not an organized assault.

The attack took place on Friday when a man attacked the tourists with a knife in a resort in Hurghada. The injured include one Czech woman and two Armenian women.

Travel agencies did not cancel any hotel reservations or trips to Hurghada and tourists continue to flow to the city from various countries, including Germany where the two dead tourists came from.

The German Embassy in Cairo announced Sunday that the country's Foreign Ministry did not change its advice to travelers coming to Egypt following the assault.

CEO of the Meeting Point Egypt and FTI Egypt, Germany's fourth-biggest tour operator, Ali Okda, said this week that the attack will not affect tourists coming from European countries.

He said that attacks and vehicle-ramming incidents occurred in a number of European countries, and it did not impact tourism there.

Also, neither Thomas Cook nor TUI Germany, the largest tour operators in Europe, have announced any changes to their travel schedules to Egypt.

Czech ambassador to Egypt Veronika Kuchynova has further confirmed that there will be no changes to plans of travel from the Czech Republic to Egypt following the attack.

Similarly, Armenia said that no trips to Egypt have been canceled and that new travel packages to Hurghada and Sharm El-Sheikh were being sold.

Tourism in Egypt has been picking up recently, with the number of tourists visiting the country in the first quarter of 2017 reached 1.73 million, a 51.1 per cent increase compared to the same period in 2016, according to figures from the Central Agency for Mobilisation and Statistics (CAPMAS).

Nonetheless, the U.S. State Department issued a travel warning for Americans traveling to the country after the attack, warning them to consider "the risks of travel to Egypt due to threats from terrorist and violent political opposition groups."

Russia, which exports the largest number of tourists to Egypt, is still banning travel to the country. Despite numerous inspections of Egypt's airports by Russian experts, in which they praised security efforts, flights from Russia haven't been yet resumed.

Russia banned all flights to Egypt following the downing of a Russian airliner over Sinai in 2015, killing all 224 on board The ban on Russian flights drove the number of incoming Russian tourists down by more than 50 per cent.

He added that Russia is concerned over the lack of progress by the Egyptian authorities in the investigation of the plane crash.

Egypt's tourism sector is one of the country's main foreign currency earners, and it has been struggling after the political and economic turmoil following the 25 January Revolution in 2011.

More than 14.7 million tourists visited Egypt in 2010, dropping to 9.8 million in 2011.
Tourism now makes up around 3.5 per cent of the country's economy, compared with five per cent before the Revolution, according to Central Bank data.