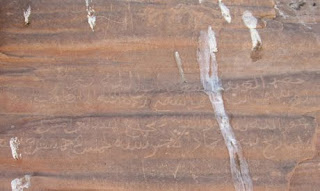 The newly discovered text in the Red Sea governate

An Egyptian mission has stumbled upon a cave in Upper Egypt which contains Medieval-era Arabic graffiti.

The cave was discovered during an archaeological survey carried out at the archaeological sites located in the area known as the Golden Triangle in the Red Sea governorate.

Deputy Minister of Antiquities Mohamed Abdellatif told Ahram Online that studies reveals that the cave was a rest house for pilgrims, traders and passengers who used it to protect themselves from the hot weather during their trips from Egypt to Mecca or Palestine.

During their stay in the cave, said Abdellatif, they carved graffiti on the walls, some of which remain while others have disappeared due to erosion.

The ministry is now studying the possibility of putting the cave on the official list of antiquities sites in an attempt to protect it, as well as restoring the texts.

Mohamed Tuni, an archaeologist at the governorate's Islamic and Coptic Antiquities Department, said that the texts are composed of two sections. The first reads: "there is no God except Allah" while the second reads: "God has returned the poor slave Youssef Bin Hatem Al-Shati to his family in 755 of Hegira. May God have mercy on him and his parents and all the Muslims. Amen."

Tuni describes the texts as unique within the Golden Triangle area, which consists of the cities of Safaga and Qusseir at its base with the Upper Egyptian city of Qena at the top. 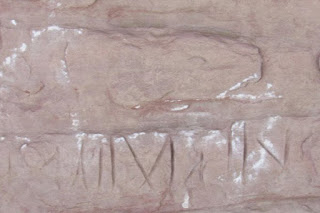 The newly discovered text reads: No God except Allah.