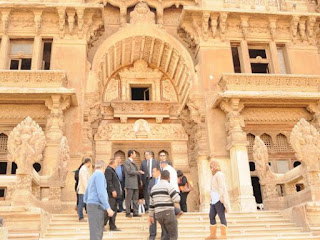 The Arab Contractors Company, commissioned by the Engineering Corps of the Armed Forces in cooperation with the Ministry of Antiquities, began work on the development and restoration of the Baron Empain Palace in Heliopolis. The project is in accordance with protocol signed between the Ministry and the Authority, for the restoration of a number of archaeological buildings across the country.

Mohamed Abdel Aziz, director general of Cairo Historic Project, said that the company started equipment preparation for the restoration last week, after receiving all the documents and studies related to the assignment from the Ministry of Antiquities consultation office.

Abdul Aziz said the point of the project is to rehabilitate the Baron Palace while preserving its unique architectural style and archaeological elements, as well as educate visitors about the palace and its history.

The renovation work is expected to last about a year and a half, at a cost of LE113.738 million funded by the Egyptian government.

The Baron Empain Palace is a unique architectural masterpiece built by the Belgian millionaire Edouard Louis Joseph, Baron Empain, who came to Egypt from India at the end of the 19th century. The palace is located in the heart of Heliopolis in Cairo. It lays on an area of about 12.5 thousand meters.

The palace is designed so the sun can enter the rooms from all sides and it is one of the most luxurious palaces in all of Egypt. The Baron's room, in the palace, includes a detailed painting depicting the thorough wine making process.

Baron Empain's inspiration for the palace came from the Angkor Wat Temple in Cambodia and the Hindu Orissa temples. It was designed by French architect Alexandre Marcel and decorated by Georges Louis Claude, and was completed in 1911.