Over the last 4 years, the British Museum has been producing 3D models for the public to view online. The roots of this work can be traced back to the Arts and Humanities Research Council's (AHRC) funding for our MicroPasts crowd-sourcing project with University College London (UCL), which co-produced 3D objects for academic research. Our 3D output was then continued through our web team's use of native mobile phone applications to publish our first iconic objects on the Sketchfab platform, with many of these available to download under a flavour of a Creative Commons Non-Commercial license.

All of this work was based around the principles of Open Science and the premise of being cheap, quick and easy to replicate for anyone. A technique called photogrammetry was used (multiple photographs taken in a strategic pattern around the object) and the resulting output was rendered in 3D software. Ideally anyone, an individual or institution, should be able to replicate our methods to create 3D representations of archaeology or artworks.

For a long time, many people have questioned the worth of these 3D objects, what value do they add? They are a natural extension of documentation of museum artefacts; it is a progression from line drawing to photography and now the 3D representation which can be audio described, annotated, reused and embedded. There is also the potential for this to be monetised. This could create a valuable income stream to fund some of the Museum's work.

Several opportunities were identified and some were tested including Virtual Reality (VR) experiences, working with the gaming and other Creative Industries. However one of  the most exciting ones for our Digital Humanities team who create these models, was the development of a partnership with the British Museum Company.

Room 3:  models used within the displays

A concept of creating facsimiles for sale in the British Museum online and on-site shops was formed. Working in partnership with an Oxfordshire based 3D company ThinkSee3D, who had provided replicas for our successful Asahi Shimbun Room 3 displays – Creating an ancestor: the Jericho Skull , Containing the divine a sculpture of the Pacific god A'a and Moving stories: three journey's – a series of new techniques were used to produce high quality items for sale in the Grenville Shop directly from models created in-house and drawn from our collection on SketchFab. 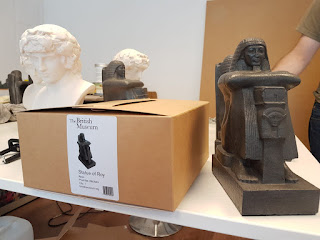 The first batch of models for sale by BMCo.

It quickly became apparent, that printing models in plastics would be environmentally unfriendly and that gypsum prints would be too costly, so methods moved towards the tried and tested method of casting directly from a mould derived from a 3D model.

A statue of Roy, High Priest of Amun

ThinkSee3D have now developed a range of products for sale, starting with the Statue of Roy, Priest of Amun (shown above as a 3D capture from which the mould was created) which has been cast from re-usable moulds in Jesmonite (a water based resin commonly used in museums), with the potential to produce in bronze, clear resins, chocolate or any media of choice. A resin replica of the statue of Roy, can now be bought in the British Museum's Grenville Shop or online for £300.

Buy your Statue of Roy, Priest of Amun from the online shop today.