BY SUZANNE DAVIS, Curator of Conservation, Kelsey Museum of Archaeology

For the past several years, I've spent part of the winter in the small Sudanese village of El Kurru, and every year I fall a little bit more in love with it. I work there with Kelsey Research Scientist (and Kurru dig director) Geoff Emberling on the excavation and preservation of an ancient, royal cemetery.  Two years ago, the Kurru project team began to deliberately focus on community engagement as a way to forge stronger links between the local community and the ancient site.

This work has evolved slowly, beginning from plans to present the site to tourists (of which there are a surprisingly large number). El Kurru is an interesting site, with a big pyramid, two beautifully-painted subterranean tombs, and a large rock-cut temple. But the site is only a small part of what I love about El Kurru. I love the Sudanese friends and colleagues we have there, the beauty of the Nile, and the family we live with. Tourists to the site, sadly, enter from a desert road and never have a reason to visit the town. As we planned the site itinerary for tourists, we kept saying to ourselves – wouldn't it be great if visitors could keep walking and go into town, down through the date palm groves, and see the Nile? What if they could drink some Sudanese coffee, hear some music, and eat Sudanese food?

Over the past two years, we've worked with University of Michigan colleagues to assemble focus-groups in El Kurru to explore this idea. Not only did village residents think it was good idea – an exciting idea, even – to showcase local culture, they had a clear vision for what visitors should learn about their village and what experiences make El Kurru special. Here are photos of a few. 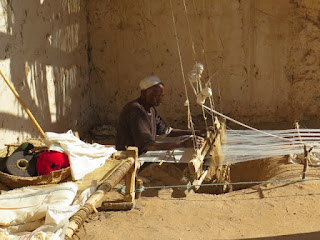 Mohammed Ahmed Al-Makee, who is in his nineties, is one of El Kurru's last traditional weavers. His wife dyes and spins cotton into yarn, and from this he weaves scarves, shawls, and bed coverings on a pit-loom in the courtyard of his house. He allowed my colleague Jack Cheng and I to talk with him about his work and to record the sights and sounds of his loom, which he inherited from his grandfather. 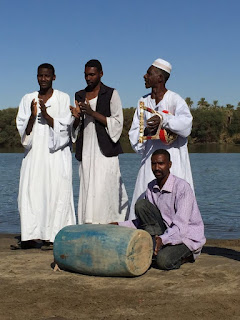 Once or twice a during the field season, we are treated to a riverside concert of traditional music. There is singing and dancing, and the primary instrument is the tambour, a stringed guitar-like instrument. These instruments are made in the village and are often decorated by the town's henna artist. In this group, the musician I know best is Abdel Bakee, the drummer. 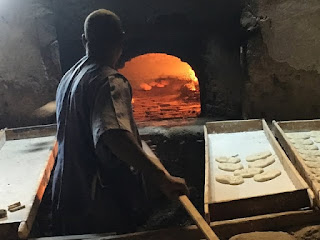 Bread is the backbone of every meal in El Kurru. There are several popular kinds of bread in Sudan, but the one shown here is a pita-type bread made from wheat flour. It is baked fresh every day in multiple village bakeries and is especially delicious right out of the oven. The baker pictured here is Ahmed Ibrahim. 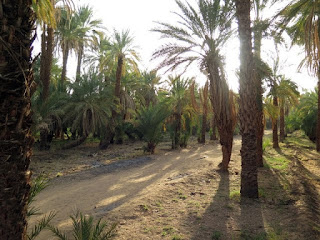 El Kurru is an agricultural village focused on date farming. The date palms grow in beautiful gardens along the Nile. Families own a plot of land and work together to irrigate it, care for the trees, and harvest the dates, of which there are many kinds. From the house where we live, we can walk across the street and through this section of trees to get to the Nile. It is about a five minute walk to the river.