The Japanese city of Shizuoka is celebrating Easter the ancient Egyptian way with a major exhibition of antiquities, reports Nevine El-Aref 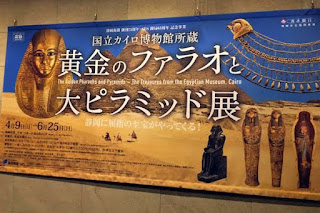 It seems that ancient Egyptian artefacts are hogging the attention of the Japanese city of Shizuoka this Easter, taking away attention from traditional bunnies and coloured eggs.

Pictures of the Great Pyramids at Giza, the Pharaoh Khufu's solar boat, a golden mask of Amenemopet, a limestone pyramidion of Ry and Maya, a black basalt statue of Khafre and jewellery embellished with precious stones have been decorating the walls of the city's train station, shops, hotels and streets instead of the usual Easter decorations.

Last Saturday a gala ceremony was organised at the Shizuoka Prefectural Museum of Art to celebrate the opening of "The Golden Pharaohs and Pyramid Builders" exhibition on the seventh leg of its tour, with Japanese officials, Egyptologists and curators gathering to attend the inauguration. 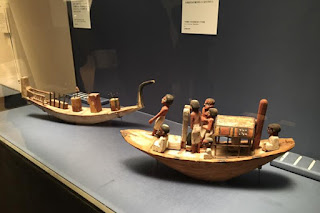 
The exhibition was originally opened in October 2015 in the Japanese capital Tokyo and was scheduled to tour seven other cities in Japan over a 25-month period, including Matsuyama, Sendai, Kagoshima, Kyoto, Toyama, Shizuoka and Fukuoka.

"The exhibition at its sixth stop in Toyama attracted 80,000 visitors, and we are expecting around 110,000 people to visit the exhibition in Shizuoka," Naomi Kudo, the exhibition coordinator, told Al-Ahram Weekly. She said that all the tickets for the first day had been sold.

"The exhibition not only sheds light on the Old Kingdom and the age of the Pyramid Builders, but also highlights the strong relationship between Egypt and Japan," Mahmoud Afifi, head of the Ancient Egyptian Antiquities Department at the Ministry of Antiquities, told the Weekly.

He added that the exhibition was a good opportunity to promote tourism and to encourage Japanese tourists to return to Egypt. 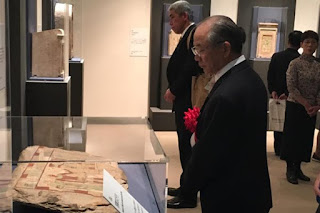 
Afifi said that Egyptian-Japanese cooperation in the cultural field was being seen in many current projects. Among the most important was the Grand Egyptian Museum (GEM) overlooking the Giza Plateau, which will put on display 100,000 artefacts and welcome millions of visitors every year.

"This is thanks to the Japanese government and the Japan International Cooperation Agency [JICA] for their continuous efforts and support in offering two soft loans to complete one of the most important cultural projects in the world," Afifi said.

In addition, Japan has provided technical and scientific support through the provision of scientific equipment and materials to the GEM's conservation centre.

There are many joint Egyptian-Japanese missions at various archaeological sites in Egypt that have yielded important results. Waseda University, for example, has been excavating in Egypt since 1966, and it was among the first foreign institutions to introduce advanced technological tools to better understand Egypt's archaeology.

One of the university's recent projects is the exploration of Khufu's second solar boat in its pit on the Giza Plateau. 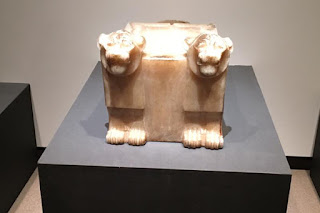 
"The exhibition is the first of its kind in Japan," Sakuhi Yoshimura, president of the Higashi Nippon International University and the exhibition's supervisor, told the Weekly, adding that exhibitions featuring the Pyramids were currently rare internationally.

He explained that the aim of the exhibition was to use a variety of exhibits to decipher the truth behind the construction of the Pyramids in order to discard fantasies and present only established facts.

"This is the first comprehensive exhibition dealing with the Pyramids to be held anywhere in the world, and the artefacts it presents are amazing for their quality," Yoshimura said.

The exhibition has five sections. The first features the construction of the Pyramids and the techniques employed, displaying a pyramidion, a hammer that was used to work the square stone blocks, surveying tools and other items. 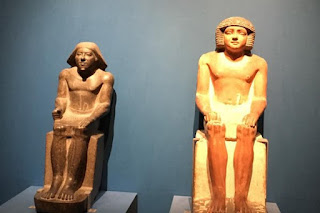 
The second section looks at the rulers of the Old Kingdom during the Pyramid-building period by displaying sculptures of the pharaohs who reigned during the era. Among the best of these are three statues connected with Khufu that were discovered by the Waseda University mission.

"It is the first time that so many statues of the pharaohs have been gathered together anywhere in the world outside Egypt," Yoshimura said.

He added that the third section of the exhibition considered the labourers who had served the ancient Egyptian pharaohs and had devoted themselves to the construction of the Pyramids. It puts on display a large collection of statues of nobles, officials, family members and a married couple, as well as images of craftsmen, bakers, potters and brewers.

The fourth section of the exhibition focuses on the women who supported the labourers, looking at their belongings and daily customs. There is a striking collection of gold and silver jewellery decorated with semi-precious stones. 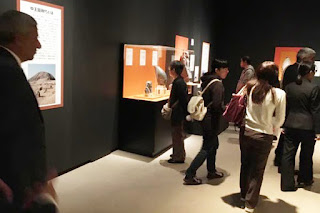 
The fifth and final section features the aspirations and desires of the ancient Egyptians, including their desire to arrive safely in the afterlife. It looks at the artefacts they have left behind in an attempt to understand their hopes of travelling to the next world and what kind of life they expected to spend there.

"The ancient Egyptians thought of the afterlife as being a golden paradise, and the methods by which they gained admittance to it were the most important themes of their lives," Yoshimura told the Weekly.

He said that it was for this reason that the ancient Egyptians had been happy to devote themselves to the construction of the Pyramids, even if they were injured or their neighbours were killed during work which could take decades to complete.

In addition to the five sections of the exhibition, images of the solar boats that transported the pharaohs to the afterlife are also on show to give visitors a better understanding of ancient Egyptian ideas about the Pyramids.

One of the highlights of the exhibition, a golden mask of Amenemopet, is being shown in Japan for the first time in 21 years. A high-definition film of the mask of Tutankhamun, the first time the piece has been filmed outside its display case, is also being shown. 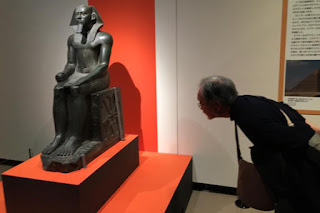 
Elham Salah, head of the Museums Section at the Ministry of Antiquities, told the Weekly that the exhibition highlighted one of the most interesting eras of ancient Egyptian history: the period of the Pyramid builders.

Each artefact in the show displayed the dazzling craftsmanship that had characterised the period, she said, adding that it included 120 artefacts carefully selected from the Egyptian Museum in Tahrir Square, including the statues of Khafre, a group of statues of servants, workers, and the makers of beer and bread, and a statue of a scribe.

Also on display are a kind of ancient game set and a statue of the Pharaoh Ne-User-Re.