Newly-discovered 3,000-year-old statue of pharaoh to be inaugurated Tuesday 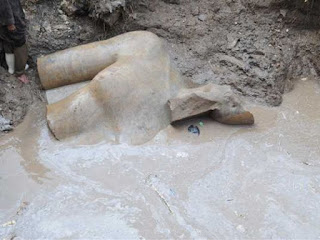 Al-Masry Al-Youm
The eight-meter statue of an ancient pharaoh discovered in a Cairo slum in March has been restored and will be inaugurated on Tuesday at Luxor Temple by Antiquities Minister Khaled al-Anany, Luxor governor Mohamed Badr and a number of foreign ambassadors to mark UNESCO's International Day for Monuments.
Anany and Badr are scheduled to open a photo exhibition at the temple on the occasion of the 50th anniversary of the establishment of the French-Egyptian Centre for the Study of the Temples of Karnak in 1967, alongside the announcement of a new archaeological discovery in the governorate.
The 3,000-year-old statue was found submerged in ground water in Ain Shams by a joint German-Egyptian archaeological mission operating in the Matariya area.
Experts initially thought the statue was Ramses II because it was found at the location where the pharoah is believed to have built his temple, in a city called Oun in Ancient Egypt. However, Anany told reporters that after further examination it is believed that the statue was almost certainly Psamtek I, who ruled between 664 and 610BC, rather than Ramses II who ruled 600 years earlier.
He elaborated on this suspicion, saying that the size of the statue — with an estimated height of some 9 meters (26 feet) and a weight of seven tons — was typical of Ramses II's era, but that hieroglyphs discovered at the statue's back-pillar after it was unearthed showed that it was of Psamtek I.
Anany said the discovery is one of the most important in recent archaeological digs, as it demonstrates the greatness of the temple in ancient times in terms of the magnitude of the building and the statues that were adorned by fine, precise patterns and inscriptions.
Posted by Glenn Meyer at 8:19 AM