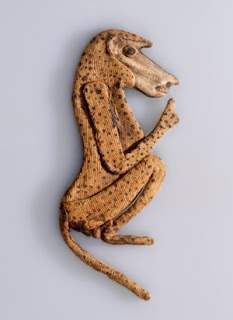 Soulful Creatures: Animal Mummies in Ancient Egypt is the first major exhibition to focus on one of the most fascinating and mysterious aspects of ancient Egyptian culture and religion--- the mummification of animals. Organized by the Brooklyn Museum and drawn from its renowned Egyptian collection, the exhibition clarifies the role animals, and images of animals, played in the Egyptian natural and supernatural world through 30 mummified birds, cats, dogs, snakes, and other animals and more than 65 objects related to the ritual use of animal mummies. Soulful Creatures is on view from September 29, 2017, through January 21, 2018.

Excavated in the nineteenth and twentieth centuries, from at least thirty-one different cemeteries, the animal mummies on display cover Egyptian history from as early as 3000 B.C.E. until the Roman period at the end of the second century C.E. "While the exact significance of animal mummies has largely remained a mystery, they are the most numerous type of artifact preserved from ancient Egypt," stated Edward Bleiberg, Senior Curator, Egyptian, Classical, and Ancient Near Eastern Art. "For example, over four million individual ibis mummies have been found at an ancient burial ground in Saqqara, and a nearby dog cemetery yielded over seven million mummies. Soulful Creatures explores the purpose of these mummies, how they were made, and why there are so many."

The four kinds of animal mummies that ancient Egyptians produced include pet, victual (mummified food placed in the tomb for the afterlife), divine, and votive (sacred offerings that communicated directly with a deity). Animals were central to the ancient Egyptian worldview and most had connections to a particular deity. The ibis and the dog are two sacred votive examples that acted as messengers to the Egyptian gods Thoth and Anubis, respectively. After death, mummified animals served a variety of religious purposes, allowing the animals' souls to carry messages to the gods. These messages were often sent through accompanying hand written letters that frequently requested good health for a sick relative or help with problems at work. The exhibition even includes an example from a child who complained to a particular god about their parent's behavior.

"These mummies were made in a carefully controlled process that resembled human mummification. It just shows how Egyptians thought of animals, on some basic level, as being very similar to human beings. They regarded animals as creatures created by the gods and believed they possessed a soul, which was unusual for an ancient culture," said Bleiberg. One of the most elaborate and expensive animal mummies in the exhibition is the Ibis Mummy from the Early Roman Period. The extraordinary artifact is lavishly wrapped in linen strips that are dyed and woven together to form a herring bone pattern and includes a wooden beak and crown to make the ibis recognizable in its wrappings.

By drawing on archaeology, cultural history, and modern medical imaging--- done by the Brooklyn Museum with Dr. Anthony Fischetti of the New York Animal Medical Center--- Soulful Creatures also reveals that many animal mummies are not what they seem. Scientific investigation of the mummies produced some surprising results and confirmed corruption in animal cemeteries that some contemporaneous texts allege. CT scans displayed in the exhibition analyze how animal mummies were made and what they contain, uncovering the empty wrappings, double mummies, and misleading packaging among some of the mummies that the priests sold to worshippers. Soulful Creatures illuminates recent scientific tests that have uncovered key information about animal mummification and illustrates how Egyptologists today investigate the many provocative theories proposed-like corruption in animal cemeteries-to explain the practice, origins, techniques, and rituals of animal mummification.

The exhibition was organized by the Brooklyn Museum and debuted at the Bowers Museum in Santa Ana, California, in March 2014 and then toured to the Memphis Brooks Museum of Art in Memphis, Tennessee, in October 2014. The Brooklyn Museum is the final venue of the tour.