I write about archaeology, anthropology, and the classical world.

Skeleton B21 from Ptolemaic era Quesna, Egypt. With its immature bones and tall stature, this individual might have been intersex.

Recent excavations at the Ptolemaic-Roman site of Quesna in Egypt have revealed two skeletons of individuals who might have been eunuchs. But these people's above-average height and other skeletal irregularities might also reflect a congenital condition rather than castration.

One person – B21 – was an adolescent of indeterminate sex from the Ptolemaic Era. The burial was oriented rather differently: with the head to the south, rather than the typical head-north orientation of the period. Although the skeleton was poorly preserved, Haddow and colleagues noticed that most of the person's bones looked extremely immature, including the growth plates of the limb bones, which were completely unfused. This meant that the person was taller than average, even though they were not fully grown. 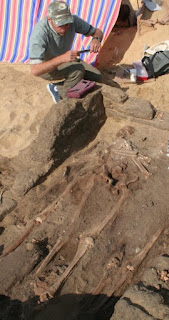 The other person – B26 – was also an adolescent of indeterminate sex, dating to the Roman Era. Buried in a collective tomb, this person was similarly much taller than average with completely unfused growth plates.

Haddow and colleagues began to suspect these individuals were possibly eunuchs because castration before the onset of puberty typically results in people who are tall and slender, with broad hips, narrow shoulders, and a sunken chest. Although there are few skeletal studies of individuals known to have been castrated, those that exist – such as of the Italian castrati Farinelli and Pacchierotti – also reveal incompletely fused long bones, tall stature, and osteoporosis.

So were these people from ancient Egypt eunuchs? The historical record would certainly allow for that possibility. Intersex individuals were present throughout the ancient world, Haddow and colleagues note, with eunuchs playing important administrative roles in Assyrian, Persian, and Roman courts. Linguistic evidence also indicates the recognition of non-binary gender statuses. In Egypt specifically, there are textual references to eunuchs working in administrative roles in the Ptolemaic and Roman courts.

But the skeletal evidence is not conclusive. Haddow and colleagues clarify that, beyond castration, other causes need to be considered. These involve a number of congenital conditions affecting the endocrine system, including sex chromosome abnormalities such as Klinefelter Syndrome or autosomal disorders such as Androgen Insensitivity Syndrome and an estrogen deficiency called aromatase deficiency. Because these conditions disrupt a person's hormonal balance and subsequent skeletal development in a similar way to pre-pubertal castration, it is difficult to differentiate among them.

Returning to the archaeological context, it interests Haddow and colleagues that B21 was buried quite differently than everyone else. Both the orientation of the grave and the artifacts included in it may, they say, "reflect societal recognition of this individual's conspicuous intersex status," which could be the result of pre-pubertal castration but might also reflect a condition such as Klinefelter Syndrome or aromatase deficiency. B26, however, was buried in a similar manner to everyone else. "Perhaps this individual's condition did not result in visibly ambiguous sexual characteristics," the researchers suggest.

Given the rarity of congenital disorders affecting sexual development -- Klinefelter Syndrome, the most common one, occurs in 1:500 live births -- the fact that there are two anomalous skeletons in a cemetery of 151 people is surprising, and could also suggest a familial relationship. DNA testing has not yet been conducted, however.

Haddow and colleagues conclude that "the combination of eunuchoid body habitus, unfused epiphyses, [and] osteoporosis can occur as the result of either genetic or culturally induced endocrine disorders." Until DNA testing is done, though, "it is difficult to establish the etiology of the skeletal features observed in the affected Quesna individuals with any degree of certainty."

As more archaeologists begin to identify potential intersex individuals in ancient graves, it is likely that our understanding of the highly variable and socially constructed nature of sex and gender roles in past populations will dramatically increase. 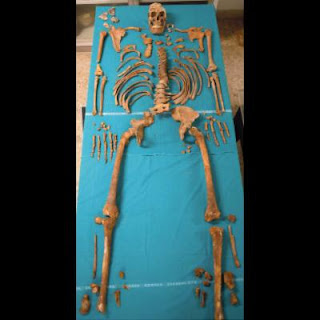