More than 600 wooden sarcophagi have been restored and catalogued by a team of experts at the Egyptian Museum, in the largest such undertaking in the establishment's history.

The collection of 626 sarcophagi was in storage for a long time at the museum, and dates back to various eras of Egyptian history including Pharaonic, Greek and Roman, museum director Sabah Abdel Razek told The National.

The oldest of the restored pieces are around 4,500 years old, she said.

The team's efforts included taking inventory of all the pieces in the collection, conducting a comprehensive survey and photographic documentation of the items and repairing any damage they had sustained during excavation or in storage.

Egyptian historian Bassam El Shamaa told The National that when it came to preserving important artefacts, Egypt's Antiquities Ministry had not carried out adequate cataloguing.

"We took meticulous inventory during this project. Some of these pieces had been sitting in storage for decades, with little records to show which piece was where. This is why we made it one of our top priorities for this project," Ms Abdel Razek said.

The museum intends to display some of the collection's pieces during the coming weeks, some of which will be seen by the public for the first time.

A number of the artefacts have been transferred to other museums including the newly opened museums of the Red Sea cities of Hurghada and Sharm El Sheikh, Ms Abdel Razek said.

The sarcophagi were discovered at various prominent archaeological sites in Egypt including necropolises in the Luxor and Minya provinces in the south of Egypt. Others were found at the Akhmim and Saqqara areas of Giza.

But the most prominent of the restored caskets were unearthed in 1891 in the Deir el-Bahari cache in Luxor, the largest intact cemetery found in Egypt in the 19th century. 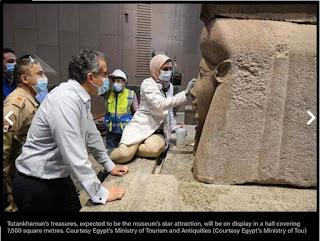 The cache was discovered by Eugene Gribo, director of the Egyptian Antiquities Authority and the Giza Museum, and contained 254 sarcophagi which are believed to have belonged to the priests and priestesses of Amun, and date back to the 21st Dynasty of ancient Egypt (1070 - 945 BCE).

"There are two reasons why this collection is significant. One is that they span a large portion of Egypt's history and give viewers a chance to see the evolution of the design techniques used by different dynasties of ancient Egypt. The other reason is that they are sourced from some of the country's most prominent necropolises," Ms Abdel Razek said.

The oldest of the coffins date back to the 3rd dynasty of ancient Egypt, around the start of the Old Kingdom, she said. Those coffins are mostly made of wood and decorated with simpler, more primitive designs.

More recent coffins from the collection are embellished with complex designs that employ a more prolific use of colour and decorative materials, Ms Abdel Razek said.

"For the pieces from the late middle period onwards, the coffins where the deceased's remains were placed began to be encased in a larger coffin to preserve them. Both coffins would be decorated and those ones are obviously more well-preserved," she said.

She said the use of precious stones, gold and gilded wood began to be widely used in New Kingdom ancients' burial customs.

The Middle Kingdom witnessed the first introduction of human-shaped sarcophagi, whereas human remains were merely placed in a crude rectangular box with minimal decorations beforehand.

The restoration project began more than a year ago and was completed in early July, Ms Abdel Razek said. Some of the collection's most ornate pieces were restored before a celebratory display in November 2020, marking the 118th anniversary of the museum's opening.