Prof. Robert K. Ritner Jr. is remembered not only for his immense impact on the study of ancient Egyptian religion, magic and culture, but also for his ability to make complex topics accessible.
Photo by George Jacobi

Prof. Robert K. Ritner Jr., a world-renowned Egyptologist and beloved teacher who spent decades at the University of Chicago, died July 25 after a yearslong battle with kidney disease and leukemia. He was 68 years old.

Remembered by colleagues for his devotion to Egyptology in his professional and personal life, Ritner wrote The Mechanics of Ancient Egyptian Magical Practice, one of the most influential volumes in the study of ancient Egyptian religion, magic and culture. First published by the Oriental Institute in 1993, the book launched a renaissance in the field and remains an OI bestseller even now in its fourth printing.

"Ritner's use of original source materials added unique perspective to his groundbreaking work," said OI research associate Foy Scalf. "He studied the original language from different periods and desired to have the Egyptians speak for themselves to gain an unfiltered view of ancient Egypt in his work." Those translations include The Libyan Anarchy: Inscriptions from Egypt's Third Intermediate Period (2009) and The Joseph Smith Egyptian Papyri: A Complete Edition (2011).

The inaugural Rowe Professor of Egyptology at the Oriental Institute and in the Department of Near Eastern Languages and Civilizations (NELC), Ritner, PhD'87, influenced many colleagues and students. A skilled lecturer who often spoke without referring to notes, Ritner used colorful slides to engage audiences in the classroom, at academic conferences and in the public. 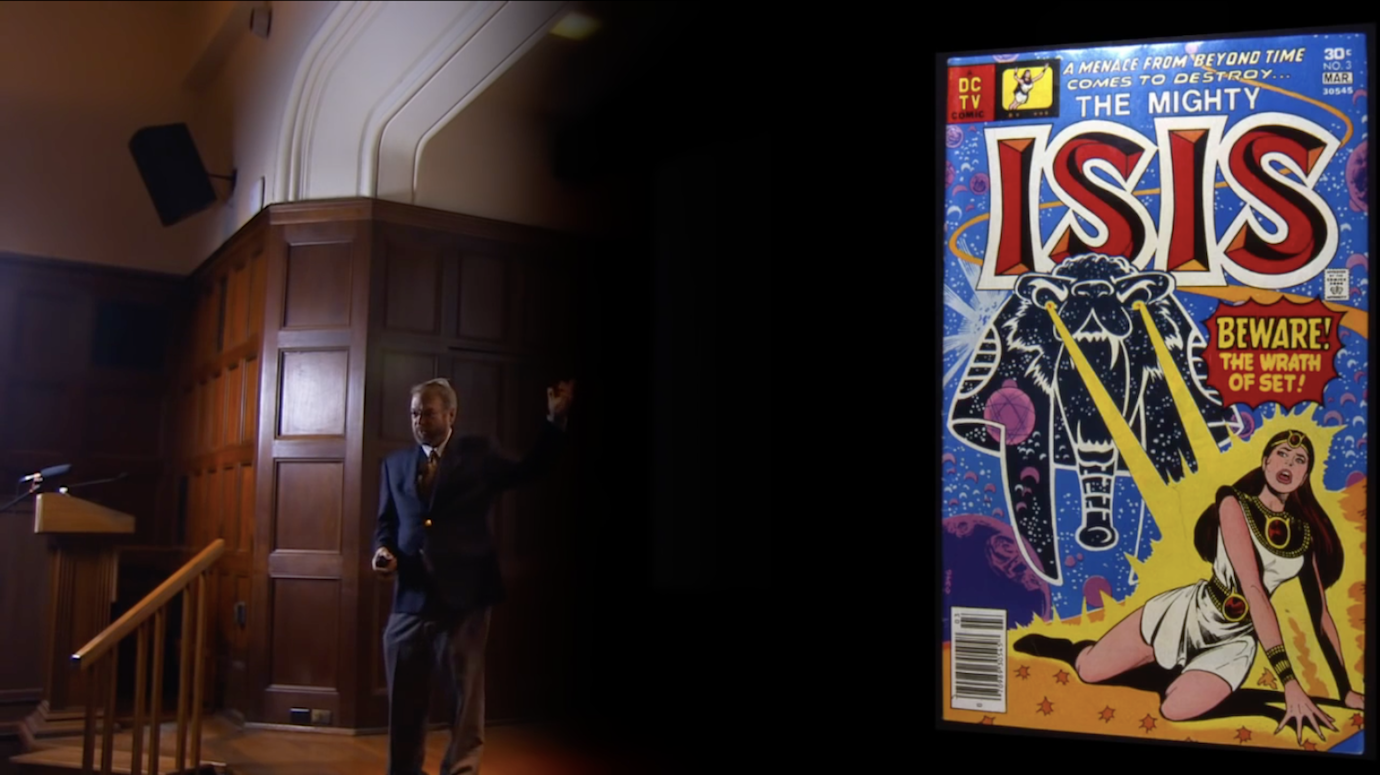 During a 2014 lecture at the OI, Prof. Robert K. Ritner Jr. discussed the Egyptian goddess Isis, including the DC comic books she inspired in the 1970s.
Video courtesy of the OI

"Robert was one of the best lecturers I've ever heard because he made complex topics easy to understand," said Janet H. Johnson, the Morton D. Hull Distinguished Service Professor in the Department of NELC at the University of Chicago. "He loved to share his knowledge and understood the meaning and implications of the ancient texts. I'll miss knowing he is down the hall and ready to answer a question anytime."

"Robert had an incredible gift of relating to people who were not academics," said Sue Geshwender, who manages volunteers at the OI and knew Ritner for more than a decade. She remembers the scholar for his "fun, loving side"—a fan of comics and horror who loved collecting.

Ritner amassed a vast collection of Egyptomania objects and kitsch, which decorated his office and his home. He was constantly accompanied by his dog Sheshonq, a wheaten terrier whom he named in honor of his favorite Egyptian pharaohs. Every Halloween, Ritner and Sheshonq would arrive at UChicago dressed as mummies or pharaohs.

His fascination with Egypt began early. Born in Houston on May 5, 1953, to Robert Kriech Ritner and Margaret (née Shelton) Ritner, Robert Ritner Jr. considered himself an Egyptophile by second grade. He made repeated visits to Houston's Metropolitan Theater, which was decorated with Egyptian-themed architecture.

Ritner graduated from Rice University in 1975, earning his bachelor's degree in psychology with honors. His first publication in 1976 focused on the spread of Coptic Egyptian influence to Ireland. Ritner then studied at the Oriental Institute at UChicago, where he worked with Klaus Baer, Ed Wente, Janet H. Johnson, and George Hughes. He received his Ph.D. with honors in 1987, and his dissertation defense drew a crowd of admirers from students and faculty members. His dissertation became the foundation for his first book, The Mechanics of Ancient Egyptian Magical Practice.

"Owing largely to Robert's dissertation, the field of magical studies has exploded, with new interest not only in Egyptian magic and its centrality in religion, but also its contacts with Greece and Israel," former OI director Christopher Woods wrote in 2019, after Ritner was named the first-ever Rowe Professor of Egyptology.

After completing his graduate studies, Ritner remained at UChicago for several years as a lecturer and a guide at the OI, and as a research associate in the Department of NELC. He joined Yale University in 1991, becoming the Marilyn M. Simpson Assistant Professor of Egyptology. He returned to UChicago in 1996 as an associate professor, earning tenure in 2001 and a full professorship in 2004.

In addition to his work at UChicago, Ritner also helped identify "The Death of Cleopatra" by Edmonia Lewis, a 19th-century sculpture which had been languishing at the Forest Park Mall. Presumed lost until its rediscovery in the 1980s, the work was donated to the Smithsonian, where it was restored and now is on display at the Smithsonian American Art Museum in Washington, D.C. 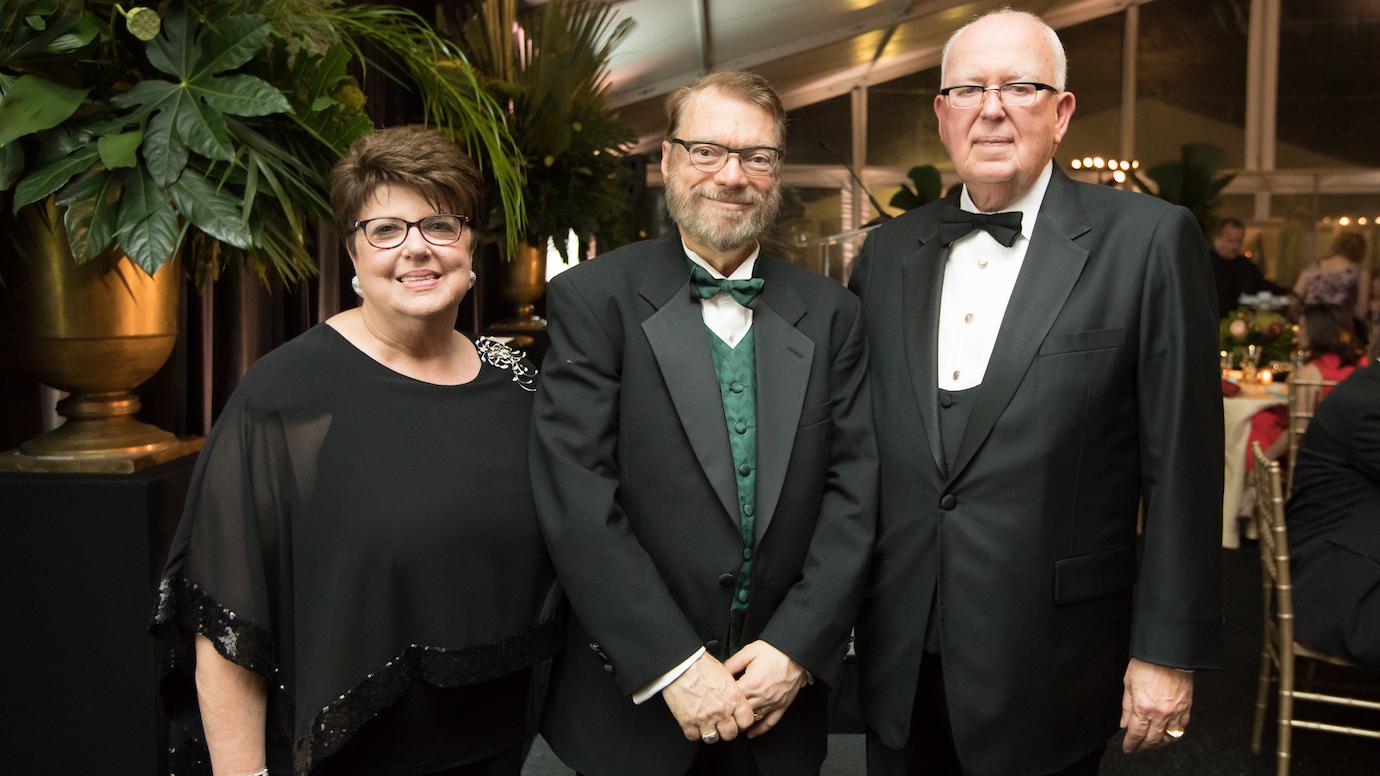 Robert Ritner was named as the inaugural Rowe Professor of Egyptology in 2019. He was recognized during an OI centennial gala, an event co-chaired by Jeanne and John Rowe (left and right).
Photo by Anne Ryan

"Robert was an exceptional Egyptologist, respected in his field and completely dedicated to the field of ancient Egypt," said Theo van den Hout, the Arthur and Joann Rasmussen Professor and interim director at the OI and in the Department of NELC. "On the other side, he had very strong opinions and beliefs. He kept us alert and, on our toes, not to give into pressure from the outside."

Ritner is survived by his brother, Rick Ritner; his sister-in-law, Jody Ritner; and his nieces Michele Hillyard, Alyssa Ritner and Nicole Waters.

—This story was also published by the Division of the Humanities.