Production stalls on Egypt's 'The King' over Pharaonic accuracy - Al Monitor: The Pulse of the Middle East

Production stalls on Egypt's 'The King' over Pharaonic accuracy

While some Egyptians see the suspension of work on the series "El-Malek" as controlling creative expression, others feel that the move is necessary to protect Egypt's identity from historical inaccuracies. 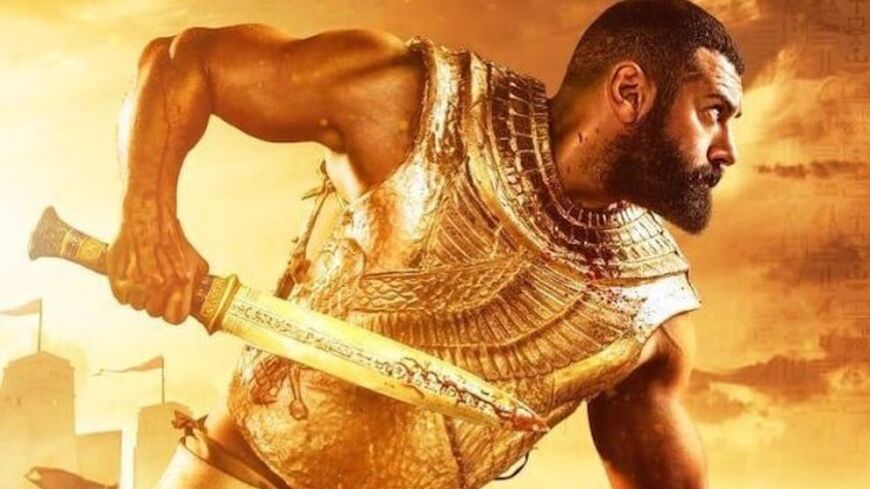 A promotional image for upcoming Egyptian series "El-Malek" ("The King")

CAIRO — Artists and social media activists started using an Arabic hashtag April 6 saying "Let's watch before we judge" in support of the makers of the series of "El-Malek" ("The King"), after production company United Media Services said it is suspending the series following criticism over alleged historical inaccuracies.

On April 4, United Media Services suspended filming and a committee will review the series' historical accuracy. The series will not be shown during the major TV season of the holy Muslim month of Ramadan, which began April 13.

The trailer for "El-Malek," which tells the story of the Egyptian Pharaoh Ahmose I, first aired on March 31. It was immediately bombarded with criticism on social media, over alleged historical inaccuracies concerning the characters' appearance, including wardrobe and accessories.

Archeologists including Egypt's former Minister of State for Antiquities Affairs Zahi Hawass joined the outcry against the series. He said in press statements that Egyptian actor Amr Youssef was not the right choice to play Ahmose I because Youssef is blond and the ancient king had dark skin with Upper Egyptian features. Hawass also said that Youssef's thick beard as well as some of the costumes were not true to the Pharaonic period, during which ancient Egyptians were clean-shaven and wore white clothing made from linen.

Mounia Fathallah, costume designer for "El-Malek," said in a press statement March 31 that the series is a dramatization, not a documentary. She pointed out that the series, which is based on Egyptian writer Naguib Mahfouz' novel "Thebes at War," tells of the struggle of ancient Egyptians and their army, led by Ahmose I, against the Hyksos people. She added that some imagination and creativity were necessary because there is very little evidence of how the Hyksos dressed and lived.

Muhammed Adly, critic and scriptwriter, told Al-Monitor that he preferred the series to be shown as it is for it would have been an opportunity for its cast and crew to have the most accurate impression about the audiences' feedback and to accurately identify the mistakes of the series, especially that it is the first trial for the Egyptian drama sector to make a war historical series. According to Adly, the Egyptian experience in that field is limited compared to international cinema and drama makers who started introducing those types of drama since the sixties, "we shouldn't expect the first trial to be free of mistakes" he added.

He expected for "El-Malek" to be among the most successful series during the season, had it been shown, despite the historical mistakes and criticism, pointing out that there are two schools in executing epic and historical series; the first school depends on adapting characters and environment in a realistic way that is close to the real features and body shapes of characters and to the designs of costumes and accessories. The second school prioritizes the popularity and the talents of some stars, even if they do not necessarily fit the characters, they are familiar actors that audiences like and are accustomed to seeing.

Elizabeth Taylor played the role of Cleopatra, but some believe that statues of Cleopatra and her portrait on coins suggest that she was overweight.

In "Gladiator," American actor Joaquin Phoenix portrayed Emperor Commodus without the bushy beard that the statues of the Emperor bear. Also, the statues exhibited in the film were unpainted, while Roman statues were often painted. Today's audiences are used to seeing the ancient statues as white because the paint wears off through the passage of time.

"For me, the first school is the correct one, however, 'El-Malek' can be shown as a series that belongs to the second school, especially if Yousef's bearded appearance is justified by some circumstances like Ahmos staying in war camps for months under siege, or if he was trying to masquerade, with a note that the events of the series are inspired by a true story with a fictional treatment" he added.

Egyptian actor and former tour guide Tamer Farag told Al-Monitor that it is not formalism to have the characters playing ancient Egyptians in El-Malek series appear without beards. He explained that portraying ancient Egyptians as clean-shaven is linked to Egyptian identity and Egyptian archeologists and historians have used the detail to rebuff Israeli claims that Egyptian Jews were the builders. The inscriptions on the Egyptian temples' walls show that the pyramid builders shaved their heads and faces, and the feature distinguished them from the Jews who later settled in Egypt, he added.

Alaa Abdel Aziz, a professor of egyptology at Fayoum University, told Al-Monitor, "Even though we accept the lack of historical resources on the Hyksos as well as the dramatic requirements of look and context, there are still other historical inaccuracies. These inaccuracies point to the production's lack of research. For instance, Egypt's King Seqenenre Tao appears wearing a red crown, though the king wore a red and white crown back then. And a Hyksos queen appeared wearing a gold necklace that was designed for Pharaonic Queen Ahhotep I following the expulsion of the Hyksos."

An art critic who declined to be named told Al-Monitor that the series was expected to face the same criticism regardless of the production company behind it. However, the source pointed out that few critics and social media activists were subjective with their criticism because they adopted a political agenda that considers United Media Services a monopolistic entity, despite the many production companies that are participating in shows this Ramadan season. The source did note that United Media Services has the highest number of productions as it has significant budget and capital.

The critic said that the company's "huge budget" is part of the reason United Media Services is able to postpone the showing of the series, since smaller companies could not bear the significant loss incurred by a delay and re-filming costs.

Film critic Magda Khairallah disapproves of the suspension, while she also objects to the series' content. She told Al-Monitor that halting the filming negatively affects the film industry, as the series is the biggest production of the year.

Khairallah added that it is possible to screen the series as is now by adding a disclaimer saying that the scenes are fictional recreations.

Prominent Egyptian actor Salah Abdullah tweeted April 3 that the public was too quick to criticize "El-Malek." The series could be based on fiction or a vision mixing the present with the past, which will not require historical accuracy, he said.