'Many foreign missions searched for this city and never found it. We began our work searching for the mortuary temple of Tutankhamun because the temples of both Horemheb and Ay were found in this area' 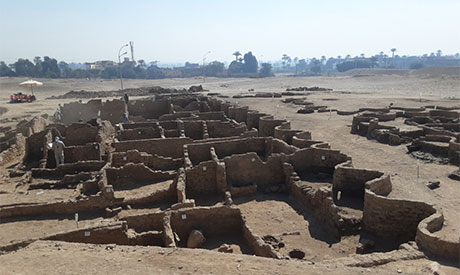 a view of the Lost Golden City.

The Egyptian mission under Zahi Hawass discovered an ancient Egyptian city in Luxor - The Rise of Aten - that was lost under the sands 3000 years ago.

The city - dubbed the Lost Golden City - dates to the reign of Amenhotep III, and continued to be used by Tutankhamun and Ay.

"Many foreign missions searched for this city and never found it. We began our work searching for the mortuary temple of Tutankhamun because the temples of both Horemheb and Ay were found in this area," Hawass said.

The Egyptian expedition was surprised to discover the largest city ever found in Egypt. Founded by one of the greatest rulers of Egypt, king Amenhotep III, the ninth king of the 18th dynasty, who ruled Egypt from 1391 till 1353 B.C. This city was active during the great king's co-regency with his son, the famous Amenhotep IV/Akhenaton.

It was the largest administrative and industrial settlement in the era of the Egyptian empire on the western bank of Luxor.

"The city's streets are flanked by houses; some of their walls are up to 3 metres high,' Hawass continued, "we can reveal that the city extends to the west, all the way to the famous Deir El-Medina."

Betsy Brian, professor of Egyptology at John Hopkins University in Baltimore USA, said "the discovery of this lost city is the second most important archeological discovery since the tomb of Tutankhamun".

"The discovery of the Lost City not only will give us a rare glimpse into the life of the Ancient Egyptians at the time when the empire was at its wealthiest, but will help us shed light on one of history's greatest mysteries: why did Akhenaten & Nefertiti decide to move to Amarna?" Brian added.

The excavation area is sandwiched between Rameses III's temple at Medinet Habu and Amenhotep III's temple at Memnon. The Egyptian mission started working in this area in search of Tutankhamun's Mortuary Temple.

Tutankhamun's successor, king Ay, built his temple on a site which was later adjoined on its southern side by Rameses III's temple at Medinet Habu.

Egyptologists believe Ay's temple may formerly have belonged to Tutankhamun, as two colossal statues of the young king were found there. The northern part of the temple is still under the sands.

The excavation started in September 2020, and within weeks, to the team's great surprise, formations of mud bricks began to appear in all directions. What they unearthed was the site of a large city in good condition of preservation, with almost complete walls and with rooms filled with tools for daily life.

The archaeological layers have laid untouched for thousands of years, left by the ancient residents as if it were yesterday.

The first goal of the mission was to date this settlement using hieroglyphic inscriptions found on clay caps of wine vessels. Historical references tell us the settlement consisted of three royal palaces of king Amenhotep III, as well as the empire's administrative and industrial centre.

A large number of archaeological finds, such as rings, scarabs, coloured pottery vessels, and mud bricks bearing seals of king Amenhotep III's cartouche, confirmed the dating of the city.

After only seven months of excavation, several areas or neighbourhoods have been uncovered.

In the southern part, the mission found a bakery, a cooking and food preparation area, complete with ovens and storage pottery. From its size, we can state the kitchen was catering to a very large number of workers and employees.

The second area, which is still partly uncovered, is the administrative and residential district, with larger and well-arranged units.

This area is fenced in by a zigzag wall, with only one access point leading to internal corridors and residential areas. The single entrance makes us think it was some sort of security, with the ability to control entry and exit to enclosed areas.

Zigzag walls are one of the rare architectural elements in ancient Egyptian architecture, mainly used towards the end of the 18th dynasty. The third area is the workshop.

On one side, the production area for the mud bricks used to build temples and annexes. The bricks have seals bearing the cartouche of king Amenhotep III (Neb Maat Ra).

On the other, a large number of casting molds for the production of amulets and delicate decorative elements. This is further evidence of the extensive activity in the city to produce decorations for both temples and tombs.

All over the excavated areas, the mission found many tools used in some sort of industrial activity like spinning and weaving.

Metal and glass-making slag has also been unearthed, but the main area of such activity has yet to be discovered.

Two unusual burials of a cow or bull were found inside one of the rooms. Investigations are underway to determine the nature and purpose of this practice.

And an even more remarkable burial of a person found with arms outstretched to his side, and remains of a rope wrapped around his knees. The location and position of this skeleton are rather odd, and more investigations are in progress.

One of the most recent finds is a vessel containing two gallons of dried or boiled meat (about 10 kg); it has a valuable inscription: Year 37, dressed meat for the third Heb Sed festival from the slaughterhouse of the stockyard of Kha, made by the butcher luwy.

This valuable information not only gives us the names of two people that lived and worked in the city, but confirmed that the city was active at the time of King Amenhotep III's co-regency with his son Akhenaten.

The excavation also reveals a mud seal with inscriptions that can be read: "gm pa Aton" which can be translated to "the domain of the dazzling Aten", this is the name of a temple built by King Akhenaten at Karnak.

As history goes, one year after this pot was made, the city was abandoned, and the capital relocated to Amarna. But was it? And why? And was the city repopulated again when Tutankhamun returned to Thebes?

Only further excavations of the area will reveal what truly happened 3,500 years ago.

To the north of the settlement, a large cemetery was uncovered, the extent of which has yet to be determined.

Work is underway and the mission expects to uncover untouched tombs filled with treasures. 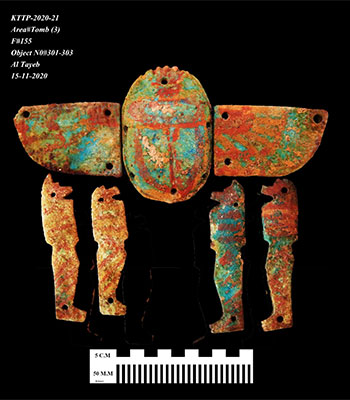 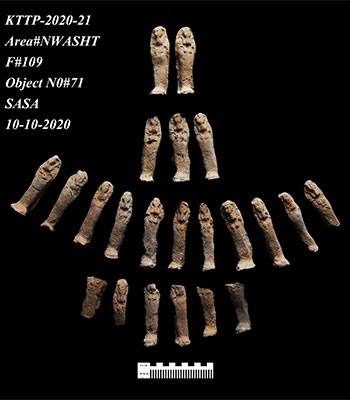 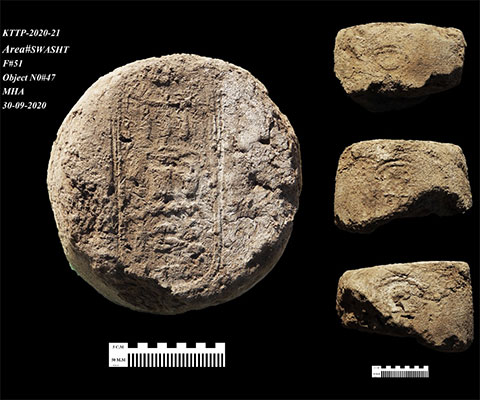 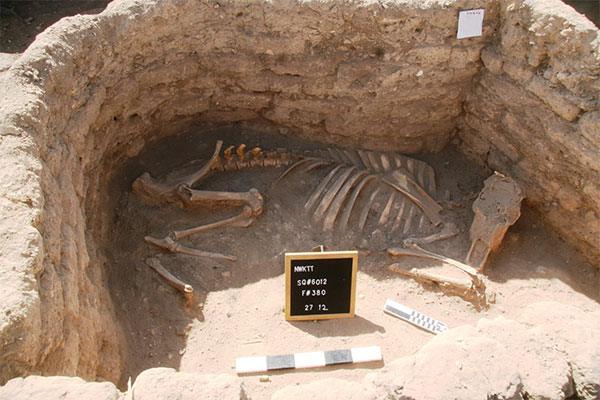 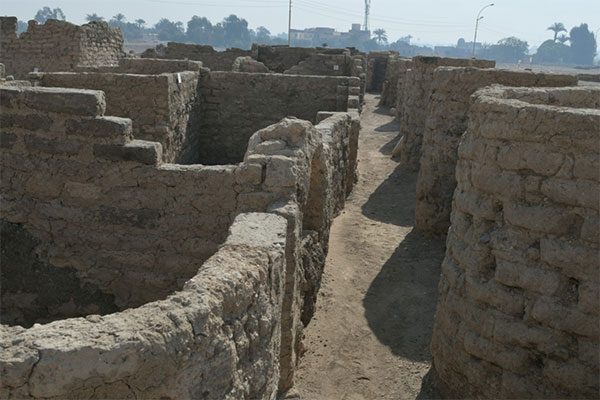