Alaa Awad on the brilliance of ancient Egyptian artists

As painter Alaa Awad prepares for his up-coming exhibition, he spoke to Ahram Online about his fascination with ancient Egyptian heritage 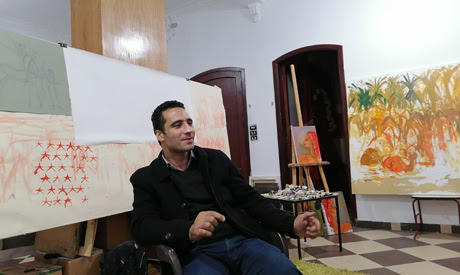 Photo by amira noshokaty
As painter Alaa Awad prepares for his upcoming exhibition, he spoke to Ahram Online about his fascination with ancient Egyptian heritage.

To Awad, the gateway to modern art is ancient Egyptian heritage. Based in Luxor, a town built on ancient Egyptian treasures and legacies, the young artist and assistant professor at the Faculty of Fine Arts in Luxor has always been inspired by ancient Egyptian art. Awad is known for his murals, especially the ones displayed in downtown Cairo.

"I was born and raised in Luxor, and since my graduation in 2004, I have spent over 12 years in my atelier in old Qorna, Luxor," Awad said.

"I would visit temples and sketch there. At the nobles' tombs I would watch the daily lives painted on the walls, which are identical to the modern-day daily lives of the people in the markets of Luxor. The agriculture and craftsmanship are very much the same as the modern-day life on the west bank," he added, reflecting on what he learnt from ancient Egyptian art.

"The ancient Egyptians were pioneers and were among the first to create art. I saw all the various art schools live in front of my eyes. I would see the abstract, the cubical, in the art works of ancient Egypt," Awad elaborated, emphasising that ancient Egyptian civilisation has inspired the modern art movement and the post renaissance.

The ancient Egyptian artist worked in 2D. He set his own scales of the face and profile, made certain distortions as he would magnify bodies and elongate legs. He would draw the king and soldiers with muscles and would use salience and sunken art techniques for various perspectives that gives it a two-dimensional effect. This is abstract.

"The ancient Egyptian artist wanted to tell stories to be recorded for posterity. He did not make optical illusions like the renaissance school of art. Renaissance artists such as Michael Angelo and Leonardo Da Vinci discovered the third-dimension perspective. This is obvious in the portrait of the Monalisa for example," Awad noted.

As for Amedeo Modigliani, he was inspired by ancient civilisations in general and especially the ancient Egyptian civilisation. According to the book titled Modigliani, by Werner Schmalenbach, the renowned Italian artist used to explore the Louvre Museum in Paris.

"He was influenced by the abstract and the distortion techniques of ancient Egyptian arts," Awad explained. 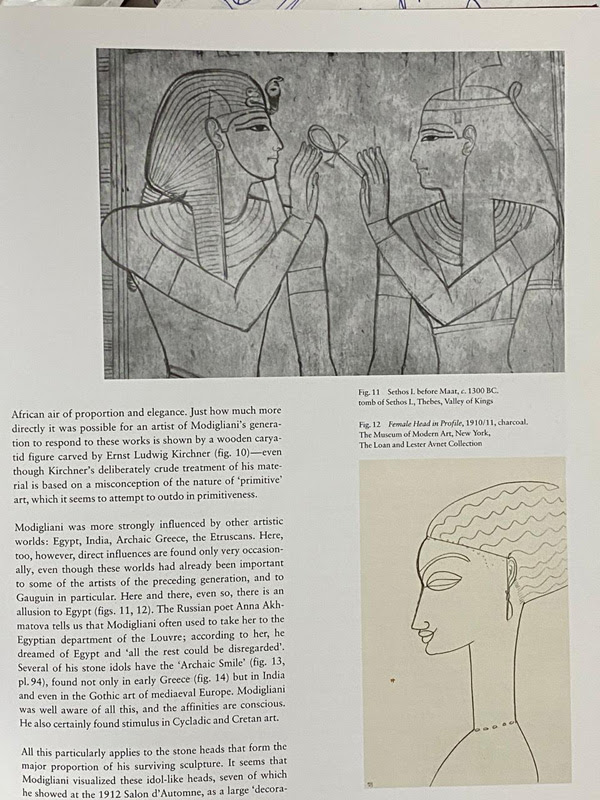 This also goes for icons of modern and contemporary art such as Henri Matisse, Georges Braque, Van Gogh, Klimt and Picasso. They were all influenced by ancient civilisations in their art.

Awad's fascination with ancient Egyptian art took another level when he studied the caricatures of ancient Egyptians that were found in Deir Al-Madina, Luxor. They are the creative art work of ancient artists when they were off duty. They reflected wit and humour.

"I started working on the caricatures, which reflects the acts of resistance and objection through art and the use of political comics, like using the cat and mouse theme, where they pictured the mouse sitting and the cat serving him," he says with a laugh.

Inspired by the abstract school of arts, Awad understood best the abstract artwork of contemporary and modern art when he related to the source of their inspiration: ancient civilisations. This also had an impact on his perception of the art and dynamics of ancient Egypt.

"I started to read the relationship between the strokes and geometrical shapes and colours and symmetry. This was a language that was ahead of its time by thousands of years. Truly there was a brilliant mind-set of the ancient Egyptians."

Unfortunately, this magnificent art is not taught in fine arts faculties. What is taught to art students is art history and not the art technique and concept of ancient Egypt.

There ought to be an Egyptian academy to study the ancient Egyptian arts, fashion, designs, sculpture and paintings

"Eighty years ago, there was Al- Marasem (Atelier) of Luxor, where a post graduate residency programme was dedicated to art students from all over Egypt, who would come and be inspired by Luxor archaeological gems and draw them for two years. The program was the gateway to icons of the Egyptian modern art movement such as Abdel-Ghaffar Shedid, Mamdouh Ammar, Moustapha Al-Feqqi, and Hassan Abdel-Fattah," he notes.

"Unfortunately, this internship was cancelled in the 1980s and replaced by a student exchange program, but we are now aiming to revive the concept."

Alaa Awad's upcoming exhibition will be in March in Cairo, and the theme will be the intangible heritage of Luxor.