'The public need to know the truth': company that valued Sekhemka statue before its controversial sale speaks out | The Art Newspaper

'The public need to know the truth': company that valued Sekhemka statue before its controversial sale speaks out

Dealer offered to buy the Egyptian artefact for £4m and save it for the nation, claims Art & Antiques Appraisals 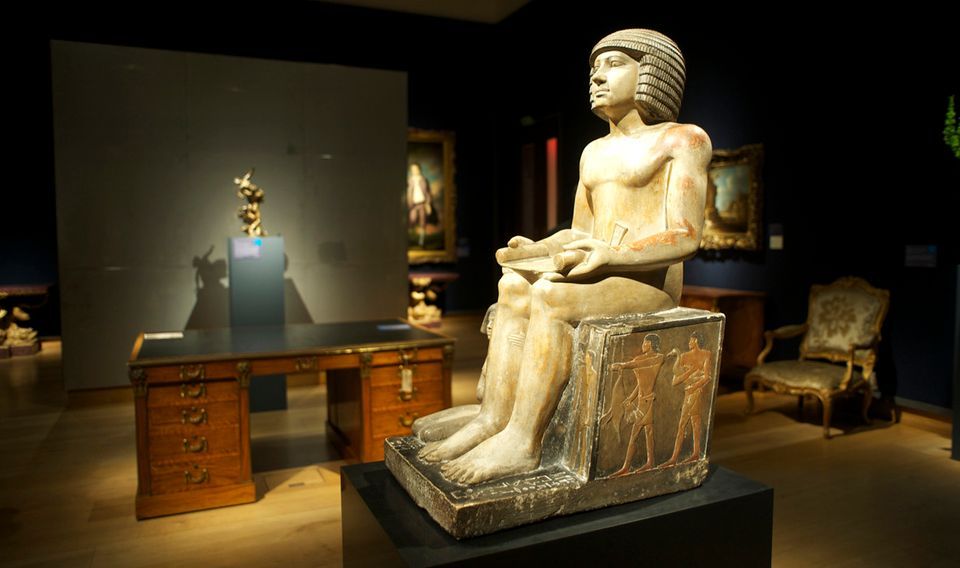 The company that valued the ancient Egyptian statue Sekhemka, controversially sold off by Northampton Museum at Christie's in July 2014, says that it made "extensive efforts… to ensure the sculpture remained on public display in a museum" and even tried to form a consortium of British museums to acquire the work.

The independent art advisory and valuation company, Art & Antiques Appraisals, has posted a statement online titled "Sekhemka: What Really Happened", insisting that the "public need to know the truth of what went on behind the scenes". Sekhemka (2400-2300BC) was sold for £15.8m (with buyers' premium), a record for an Egyptian antiquity at auction. The anonymous private buyer, rumoured to be American, eventually got an export licence to take the sculpture abroad; its whereabouts still remain a mystery.

Lord Northampton's family had given the statue to Northampton Museum around 1880. In April 2014, following legal proceedings, it was decided that he should receive 45% of the gross proceeds of the Christie's sale. Although estimated at £4m-£6m, Sekhemka fetched £15.8m, with £6.7m going to the marquess. According to the BBC, the council received more than £8m from the sale.

James Glennie, who heads the valuations team at Art & Antiques Appraisals, tells The Art Newspaper that he is speaking out now because "these partnerships matter to us and it matters to many in the museum and academic world as well, but many are being strongly encouraged to distance themselves from the trade as a result of what they think went on."

Art & Antiques Appraisals outlines how "the tale starts in February 2010, when our company… was invited to value the collection of Northampton Museum Service for insurance purposes". Egyptian antiquities form part of the collection and the specialist Joanna van der Lande subsequently assessed them.

"The piece's [Sekhemka] long-standing provenance, its remarkable level of preservation and original colour, as well as its outstanding importance when compared with other material that had appeared on the open market, led her to give it an unprecedented insurance valuation of £8m," says the valuation company.

The company suggested that the Northampton Museum loaned the statue to Fitzwilliam Museum in Cambridge. However, "rumours began to circulate about a possible sale and it became clear the loan idea had been dropped", they add. In March 2013, Art & Antiques Appraisals approached the Fitzwilliam about putting together a consortium of British museums to acquire the work, they say.

An antiquities specialist who preferred to remain anonymous says however that "the museums would have had to raise millions of pounds. Also, buying the sculpture from Northampton council would have been seen as encouraging deaccessioning for financial reasons."

Art & Antiques Appraisals then tendered a proposal to sell the sculpture, along with two competing auction houses. But the company "insists its interest was in finding a buyer among British institutions that would keep the piece on public display but, ultimately, the council dismissed this option." The piece was later consigned to Christie's.

Crucially, following the consignment, Art & Antiques Appraisals says it worked in partnership with a "white knight dealer" who agreed to buy the Sekhemka piece for millions of pounds and then loan it for public display until the money could be raised to return it to a public institution.

Against the backdrop of ongoing discussions with the Museums Associations (MA) ethics committee, the company "wrote to the council and Lord Northampton appealing to them to accept the intervention of a reasonable offer of £4m plus VAT, backed by the 'white knight' antiques dealer, which exceeded the then world record for an Egyptian antiquity sold at auction."

Lord Northampton did not respond but the council got back within days "saying that the offer from the dealer had been considered at 'the highest level' and rejected, with the council being 'committed to proceeding by way of public auction'".

The sale proved highly controversial since deaccessioning to raise funds contravened the policies of the MA and Arts Council England (ACE); as a result Northampton Borough Council was stripped of its accreditation by ACE, which left it ineligible for a range of grants and funding. The council was also barred from membership of the MA for five years.

"If the museum had received the £4m or more for it that we were suggesting, not lost its accreditation, thus receiving the grants it wanted for the museum, it may well have been better off financially than receiving 55% of the Christie's proceeds (less the legal costs of sparring with Lord Northampton etc.) and the nation would still own the statue," says Art & Antiques Appraisals.

A spokesman for Northampton Borough Council says that it accepted ACE's judgement regarding the statue's sale and have "since worked extremely hard to ensure all of our processes are entirely within the guidance it sets". He adds: "We would urge any organisations considering the sale of items within their collections to give very careful consideration to the outcome of our sale. While the statue was sold to finance an extremely important project for the cultural life of Northampton, rather than to prop up public funds, the arts and museums world still took a dim view and we understand that reaction."

Maurice Davies, who was on the MA ethics committee during the sale process, points out that the new Northampton Museum and Art Gallery is due to open early 2021. "It will be interesting to see whether there's a change of mood and people think that selling the statue to part fund the museum was in fact the right thing to do," he adds.