Down the Nile, into the Mediterranean


Down the Nile, into the Mediterranean 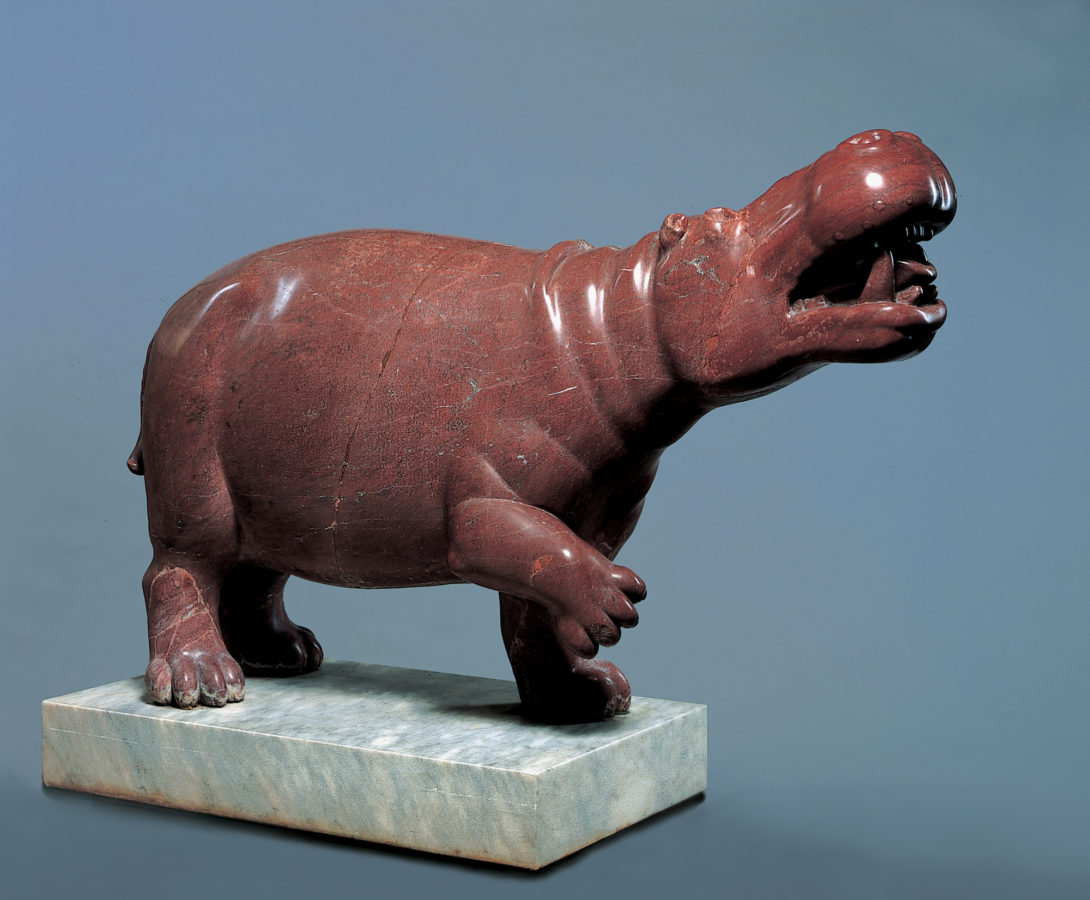 "Beyond the Nile: Egypt and the Classical World" at the Getty
Twenty-five centuries along the Mediterranean
by Bondo Wyszpolski
Because of its scope and depth, it's best to have an initial understanding of what "Beyond the Nile: Egypt and the Classical World" has set out to achieve. "The overarching goal of this exhibition," notes Jeffrey Spier, "is for visitors to understand Egypt, Greece, and Rome not as monolithic, separate entities but as cultures that shared and exchanged aspects of their religion, artistic traditions, languages, and customs in an evolving milieu."

Spier is the Getty Museum's senior curator of antiquities, and the co-author (with Timothy Potts and Sara E. Cole) of this visual banquet, on view through September 9 at the J. Paul Getty Museum. Spier, Potts, and Cole also edited the comprehensive catalogue, which includes contributions from scholars the world over.
The catalogue further enlightens the visitor, or in this case the reader, as to the show's intent: "The complex interconnections between Egypt and the Classical world over the course of nearly 2,500 years–from the Bronze Age to the late Roman Empire–have never been comprehensively explored in a major publication or museum exhibition in the United States."
In fact, it's such a far-reaching subject that his exhibition may only be the tip of the iceberg: We are told that "Beyond the Nile" is but the first in a series of exhibitions under the theme of "The Classical World in Context," and that forthcoming endeavors will examine other relationships between countries and regions in the Mediterranean and Near East during Classical times.
So it's best to jump on board for the maiden voyage.
As noted, we're looking at a period of 25 hundred years, and so the exhibition wisely is broken down into four sections, these being The Bronze Age: 2000-1100 BC; The Greeks Return to Egypt: 700-332 BC; Ptolemaic Egypt: 332-30 BC; and The Roman Empire: 30 BC to AD 300.
Obviously, when Egyptians were writing their rent checks, they weren't jotting down dates like January 15, 915 BC. And who knows what the postmarks on the envelopes would have looked like.
Joking aside, the point is that it's very difficult, and maybe it's fundamentally impossible, to understand earlier civilizations without the baggage of our far-removed perception. Furthermore, each culture, whether Greek, Roman, Phoenician, Egyptian, Babylonian, Scythian, Bachian, etc., had its own take on other cultures. One interesting thing, though, is that the Egyptians never seemed to militarily threaten the lands on the opposite shores of the Mediterranean, whereas the Greeks and the Romans launched military campaigns against them. 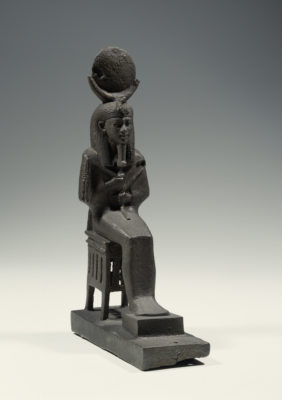 There's not much humor in the show (does history have much humor at all?), but this tidbit crops up early in the catalogue, explaining that while in Egypt the Greeks referred to the granite pillars they saw as "obelisks," which means "little skewers," and since the great pyramids at Giza reminded them of wheat cakes, or "pyramis," that's what they called them. The names stuck, but the origins have been largely forgotten.
At any rate, Egyptian civilizations, as we know, have prospered on the lower Nile and its delta regions for century upon century, and diagrams in the first chapters of the catalogue reveal the location of palaces at once-vital trading ports that eventually were overbuilt after their significance shifted or disappeared. One of Egypt's early trading partners was Crete, where the Minoans flourished, and Egyptian imports appeared there about 1,000 years before they began showing up on mainland Greece. But all development was put on hold around 1200 BC in what archeologists call a systems collapse. Within a few decades, the Late Bronze Age Aegean and eastern Mediterranean civilizations all but went dark. What happened? A cataclysmic earthquake? A drawn-out war? A devastating drought and famine? Whatever the case, about 400 years went by before Greek-Egyptian contact was re-established.

The Greeks make their move
During the period covered by "The Greeks Return to Egypt: 700-32 BC," trade resumes and we need to maneuver through a rabbit warren of names and places. Alexandra Villing, in one of the essays, describes the Nile trading port of Naukratis, which was founded in the latter seventh century BC and flourished until its decline in the seventh century AD. Put another way, Naukratis was "the most significant point of commercial and cultural exchange between Greek and Egyptian civilizations for centuries." 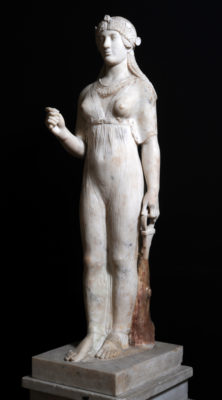 Much remains to be discovered, and uncovered. Because this was "the main hub for Greek settlers, traders, and travelers in Egypt," Naukratis had many sanctuaries, equivalent to the holy places one might visit at a later time in history to pray for a safe and prosperous journey. "As Aphrodite was a patroness of seafarers and also of the port's courtesans," Villing notes, "it is not surprising that her sanctuary was one of the earliest and most heavily frequented."
And then one of the major events in history occurred in 332 BC when Alexander the Great conquered Egypt. This really was a game-changer, comparable perhaps to what might have developed if World War II had gone the other way.
For all of his "greatness," Alexander himself was out of the picture fairly quick, but now there began a succession of imposed rulers called the Ptolemies who were, so to speak, Greek kings in the guise of Egyptian pharaohs. The Ptolemaic dynasty (there were 18+ rulers altogether) was the longest dynasty in Egyptian history, spanning 332 to 30 BC, or roughly 300 years. To put it another way, that's longer than the United States has been around.
If you carefully read the pages of the catalogue you'll discover how Graeco-Macedonian culture integrated with Egyptian culture.
Thomas Landvatter writes about Alexandria, the Hellenistic capital in Egypt, and how its mixed population fared. Did the Greeks and the Egyptians (and others) intermingle, and intermarry? He concludes, "Far from being separate from Egypt, Alexandria and its people were an integral part of it." There was a large immigrant population, and the Ptolemaic rulers had to appease all segments of it, the indigenous Egyptians and the immigrant Greeks.
As Alan B. Lloyd points out, "One of the motives for the foundation of Alexandria itself was to replace the Phoenician emporium of Tyre as the greatest commercial center in the eastern Mediterranean, and this key function was emphasized by the construction of the Pharos lighthouse to safeguard access to the main harbor." Apart from the legendary lighthouse, there was the legendary library, which burned centuries ago and scholars are still mourning the loss. 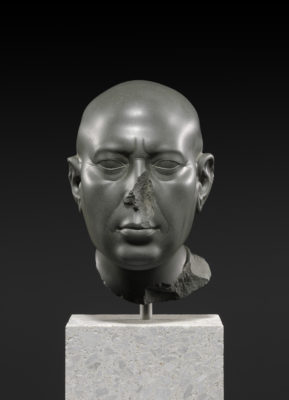 The catalogue leads us to pose many questions, such as: How did the Egyptian gods fare under Greek (and then later Roman) rule? How did Egyptian landowners make out under Ptolemaic rule? How were Egyptian sculptors influenced by Greek sculptors, and vice-versa? What we do know is that Egyptian sculptors were used to sticking with traditional ways of making art, whereas Hellenistic sculptors were more dexterous, perhaps more open to innovation. We might also want to remember that many sculptures that we think of as bare, were once brightly painted. Imagine seeing Disneyland only in black and white. Ten years ago, the Getty hosted an exhibition called "The Color of Life: Polychromy in Sculpture from Antiquity to the Present."
In this section of the gallery there's some truly captivating work, for instance faience pieces like the "Vase with Berenike II" (wife of Ptolemy III Euergetes) and "Jar with Bes and Wedjat (sacred eye)," which have that charming patina that only the centuries can give. These above pieces are Ptolemaic, from the third or second century BC.
It might go without saying that, for the most part, artifacts are better preserved the nearer we get to the present–although in this show we never get that close, do we?

Greeks out and Romans step in
And now history takes another sharp turn, described here in the words of John Pollini: "With the defeat of Cleopatra VII of Egypt and her paramour Mark Anthony following the Battle of Actium in 31 BC, the fall of Alexandria in 30 BC, and the appropriation of the treasury of the Ptolemies, Julius Caesar's great-nephew and adopted son Octavian became the uncontested leader of Rome and the most powerful man in the entire Roman world." 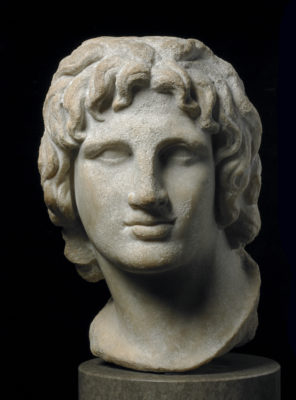 Egypt was to remain in Roman hands for over three centuries.
As with the Greek takeover, similar questions arise and are explored, especially with regard to religious worship. Two primary Egyptian deities, Serapis (or Osiris) and Isis, had temples devoted to them in Rome, the Roman emperors more or less accepting of them. As Pollini writes, "Traditional Egyptian religion continued until Late Antiquity, when it and other polytheistic religions were outlawed, accompanied by the destruction of polytheistic religious culture by Christian emperors and clergy."
Like everything else, gods and goddesses drift in and out of favor, and today when we think of Isis we think of the militant group instead of the goddess of fertility.
The Romans were intrigued by Egyptian objects or motifs, and they absorbed and incorporated it into their own culture and lifestyle. But did they take it to heart or did they merely find it exotic? Miguel John Versluys writes that it has "become clear that the Roman understanding of 'Egyptianess' was rather different from the modern perception of it. Therefore, it is important to ask to what extent our understanding of 'Egyptian' resembles a Roman understanding."
That's a good point, because we look at the objects in the show and consciously, or more likely subconsciously, attach meanings to them. Even in the present an object or artifact can mean different things to different people, so just imagine how much we must be fumbling when we try to discern what the same object or artifact meant to people living not two centuries but two millennia before us.
We can, however, narrow our gaze and get closer to a true understanding. That's what scholarship endeavors to do, and that's what this very solid exhibition does as well. It's quite an accomplishment.
Beyond the Nile: Egypt and the Classical World is on view through Sept. 9 at the J. Paul Getty Museum at the Getty Center, 1200 Getty Center Drive, Los Angeles. (310) 440-7300 or visit getty.edu. ER
Posted by Glenn Meyer at 12:02 AM