Met Museum to Return Prize Artifact Because It Was Stolen 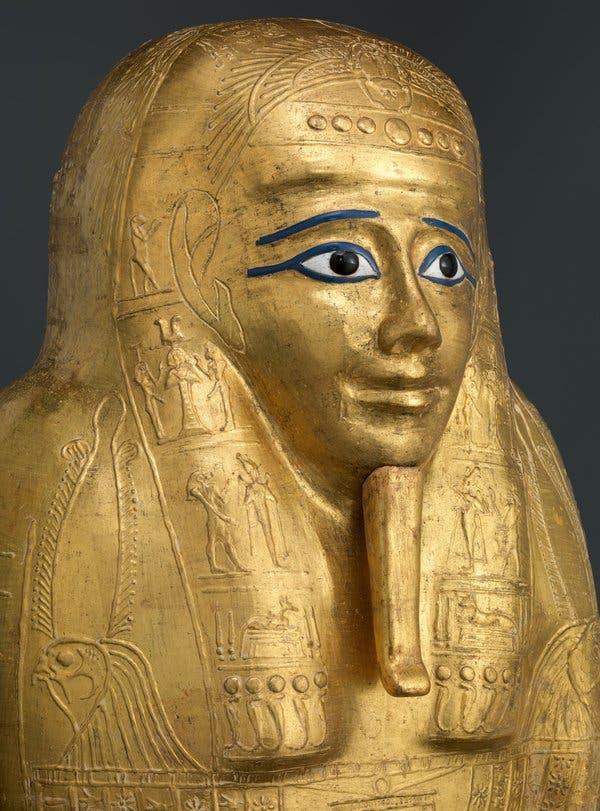 The Metropolitan Museum of Art built a substantial exhibition last year around a new acquisition, a golden-sheathed coffin from the 1st century B.C. that was inscribed for Nedjemankh, a high-ranking priest of the ram-headed god Heryshef of Herakleopolis.

But the exhibit, "Nedjemankh and His Gilded Coffin," shuttered earlier this week because the Met agreed to return the highly ornamented artifact to Egypt after investigators determined it had been recently plundered from that country.

Museum officials said that they bought the object from an art dealer in Paris in 2017 and were fooled by a phony provenance that made it seem as if the coffin had been legitimately exported decades ago.

But prosecutors with the Manhattan district attorney's office presented the museum with evidence that suggested it had been looted from Egypt in 2011.

This was the latest of several incidents that have raised questions about the thoroughness of the museum's vetting procedures when acquiring antiquities. The Met said it had fully cooperated with the district attorney's investigation and added that the museum will "review and revise" its acquisitions process.

The investigators did not discuss the details of how they had discovered the artifact was looted, but District Attorney Cyrus Vance Jr. said in a statement: "Stewards of the world's most important artifacts have a duty to hold their acquisitions to the highest level of scrutiny."

You have 4 free articles remaining.
Subscribe to The Times

Over the years the Met has occasionally parted with ancient items that may have been stolen. About a decade ago, for instance, the museum returned a 2,500-year-old vase known as the Euphronios krater to the Italian government, which suspected that it had been plundered.

In 2017 the district attorney's office seized from the museum a 2,300-year-old vase depicting Dionysus, god of the grape harvest, riding in a cart pulled by a satyr. The vase was believed to have been looted by tomb raiders in Italy in the 1970s.

Last year the Met announced it was returning to India an eighth-century stone sculpture of a Hindu goddess and a limestone sculpture from the third century.

In their statements Friday, museum officials made clear that they understand the institution's responsibilities as one of the world's leading encyclopedic museums, with substantial holdings that date from the ancient world.

"Our museum must be a leader among our peers in the respect for cultural property and in the rigor and transparency of the policy and practices that we follow," Max Hollein, the museum's director, said in a written statement. "We will learn from this event — specifically I will be leading a review of our acquisitions program — to understand what more can be done to prevent such events in the future."

The Met's president and chief executive, Daniel Weiss, in a statement, apologized to Dr. Khaled El-Enany, Egypt's minister of antiquities, and said the museum was committed to figuring out "how we can help to deter future offenses against cultural property."

Museum officials said that the district attorney's investigation showed that the Met had received a false ownership history, fraudulent statements and fake documentation, including a forged 1971 Egyptian export license for the coffin.

The Met paid 3.5 million euros (about $3.95 million) for the coffin in July 2017, said Kenneth Weine, a spokesman for the museum. He added that it had been purchased from an art dealer in Paris named Christophe Kunicki and that the Met planned to consider "all means" for the recovery of the money it had paid.

A website featuring the name Christophe Kunicki, a Paris address and the title "Mediterranean Antiquities" says that Mr. Kunicki specializes in "Greek, Roman, Egyptian and Near East antiquities." There was no response to an email message requesting comment sent to an address listed on the site.

Stay on top of the latest in pop and jazz with reviews, interviews, podcasts and more from The New York Times music critics.

The Met's exhibition, originally scheduled to run through April 21, was designed to provide contextual information about Nedjemankh's role as a priest in ancient Egypt, his burial and the decoration on the coffin. Alongside it, the museum displayed some 70 works from its extensive collection, including a priestly headdress, a statuette depicting a worshiping baboon and funerary amulets depicting the four sons of Horus.

But by nearly any measure, the coffin was the star.

The elaborately decorated surface includes scenes and texts in thick gesso relief that were intended to protect and guide Nedjemankh on his journey from death to eternal life as a transfigured spirit.

The gold used on the exterior of the coffin was associated in ancient Egypt with the gods and the divinized dead. According to ancient texts, the use of gold in the coffin would have assisted the deceased in being reborn in the next life.

"To the ancient Egyptians," the museum said, "the gold and silver could symbolize the flesh and bones of the gods or the sun and the moon; on a more specific level, they were associated with the eyes of the cosmic deity Heryshef, whom Nedjemankh served."