Egyptian Mummies and Their Stories in Museums - Nile Scribes

Many museums around the world that house a collection of Egyptian antiquities may also be home to Egyptian mummies. Inspired by Dr. Angela Stienne's work, the Nile Scribes are interested in the importance of mummies in museum collections and the attitudes that modern audiences have towards them. We are grateful to have spoken with Dr. Stienne, the founder of a mummy-centred project, Mummy Stories.

Nile Scribes: What led you to come up with Mummy Stories?

Angela Stienne: I came up with the idea for Mummy Stories in 2016 while I was doing my Ph.D. in Museum Studies at the University of Leicester. My Ph.D. thesis was on engagements with Egyptian mummies in Paris and London in the eighteenth and nineteenth centuries. As my research progressed, I was uncovering a lot of fascinating stories of encounters with mummies in museums and I wanted to share them and engage with others.

The first story on Mummy Stories was about an Egyptian mummy discovered in a disposal waste in the suburb of Paris, which had just been put on display in the local museum near where I am from in France. I wasn't so much interested in the ancient history of this mummy, but in its contemporary history and how it was discovered in an attic and dumped in the local disposal waste. It was then found by a man working there who had, coincidentally, worked in a cemetery prior and recognised the shape of the wooden coffin. As it turns out this city, Rueil Malmaison, is where quite a few men from Napoleon's expedition lived, and thus it might have been brought back from the French expedition to Egypt of 1798-1801.

As I was discussing my Ph.D. research with others, it became clear that many people had similar rather incredible stories of encounters with human remains, but there was no platform to share these. In addition, many felt their stories were not valuable because they were not experts. That's why I built Mummy Stories: to create a global conversation on human remains in museums around the world, where individuals from any background can share their stories of encounters. It started with Egyptian mummies only, and now the platform invites contributions on any human remains. It really is an inclusive community and is reshaping the conversation.

NS: What particular themes stand out to you among the stories people have shared?

AS: I think a common thread, and something that makes Mummy Stories so valuable, is the experience people have of encountering human remains and the feelings they develop when they do so. Rather than being a catalogue of biographies of human remains in museums, Mummy Stories has collected personal human experiences of individuals who went to a museum and encountered a mummy and felt something: either sadness, excitement, inspiration, or concern. It is so moving for me to get stories of individuals whose life career as an archaeologist or as a museologist have been inspired by the encounter with an Egyptian mummy, but it is also incredibly valuable to receive stories from individuals who read about the story of a specific mummy and feel deeply moved by the fate of this human, and wish it had a better display or interpretation. To me, these contributions demonstrate that Egyptian mummies and human remains in general have this quality about them that set them apart from other museum objects – they can really create a human connection.

NS: What is something you learned through this project that surprised you?

AS: In my first year of Mummy Stories, someone wrote about (the absence of) Egyptian mummies in China. She noted that there was no permanent collection of Egyptian material culture there, and therefore she saw her first Egyptian mummy in London. I have since received other similar stories which are fascinating to me, because as a French person living in the UK, I have been exposed to Egyptian mummies in museums since I was a child. So, getting stories from around the world with individuals who have different experiences and have encountered Egyptian mummies for the first time in popular culture and in the media rather than in museums is really quite insightful.

NS: How have museums shaped our understanding of (and obsession with) mummies, especially Egyptian ones?

AS: The case of Egyptian mummies is a very interesting one because there is such a long and fascinating history of engagements with Egyptian mummies throughout history, and yet many museums in Europe and North America seem to focus heavily on ancient Egyptian mortuary practices, and then jump to popular culture. For a long time, it was 'the Egyptians took the organs out from the nose' and then 'Tutankhamun's mummy might have been cursed'. Things are changing slowly, but there is still very little in museums about how these human remains have been collected, why they are so strongly present in European museums, their link to colonial practices and to racism, and their value in museums today. There is very little to answer the question: why are Egyptian mummies in museums around the world? And I think museums have a lot to answer for this: they are very complacent with the fact that visitors will come to your museum if you have mummies, but they don't offer them any alternative storylines. I hope to see more of this in the future, especially in countries that have a strong colonial history.

NS: How can museums continue to increase audiences' access to their mummies while respectfully displaying human remains?

AS: It is absolutely crucial that museums engage directly with the public when it comes to their history, where their human remains come from, and why they are relevant to the museum in the twenty-first century. There is a global trend in museums to think that if you don't talk about it, it won't come up – that's a recipe for disaster. Egyptian mummies are part of a long history of collecting: some were collected as curiosities, some as souvenirs, some were also collected in Europe to be studied as natural specimens and as evidence of racial origins. Undeniably, many come from colonial practices and some from looting. My concern is that museums are tempted to remove Egyptian mummies from display so that these contested histories don't come to light. That is not the role of the twenty-first century museum. I believe that whether museums choose to keep them on display, or choose to remove some of them, it is their duty to hold discussions about their human remains collections that are not solely about the ancient mortuary practices. It is time we discuss the history of collections. The current conversations around African collections from colonial era in France, which have made some people worry that it is ringing the death of the French museum, are the ultimate evidence that we can't simply ignore the history of why these collections and these bodies are in museums today.

In summary, I would say: engage with your audience. We need more events and community engagement practices that discuss with the public, rather than talk at the public. We need to be more outspoken and open about where our collections come from, and where we want to take them in the future. I believe the survival of museum collections depend on this.

NS: As you study the ways individuals from modern cultures encounter Egyptian mummies on display, how do you reconcile that with the fact that they were never intended to be viewed by anyone?

AS: I have given a lot of public talks in the UK and this is a question that always comes up: what would the ancient Egyptians think of being in a museum? And of course, that is not something I can answer. We simply don't know, and the concept of the modern museum is alien to ancient Egypt. What I think is important is making sure that we balance the contributions these human remains make to our understanding of the past, and the fact that they bring an audience to the museum, with making sure that we are sensitive to their nature as human remains. It is important to keep in mind that ancient Egypt is a culture that spanned a long period, and that just like with any period of time, it is not because there were some accepted beliefs about life and death, that every single person wanted to follow these; just like in a single country or religion today, not everyone agrees on how they want to live and die. 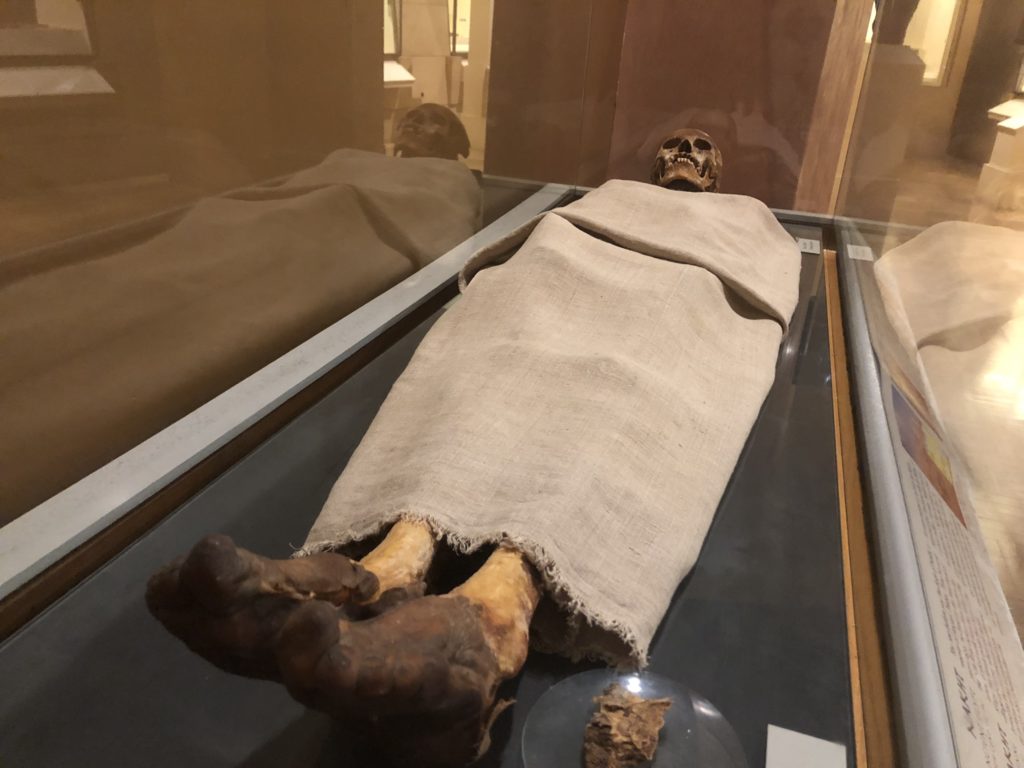 I think what is universal, however, is wanting to be treated as a human being who deserves respect. Signalling the presence of human remains, creating quiet spaces for them, and having their names and biographies written on walls are some great ways to engage with the question of being respectful to the dead. It is about making sure that we remember these were people with a life story – and with Egyptian mummies being so objectified in popular culture, it is easy to forget this simple fact.

NS: You have focussed your research on mummies within Britain and France. Have you come across differences in attitudes towards mummies in these two countries?

AS: My research has heavily focused on very large museums, especially the Musée du Louvre and the British Museum. Considering their size and location, they attract a very international public. Therefore, it is difficult to use these as a representation of what each country does or does not. One thing that is very clear is that France is very late in the debate over human remains in museums: there is little to no policy on human remains, there are barely any publications on the topic in French, and as a result the display of human remains is not being debated. Britain has done a great deal of thinking, and certain museums really stand out in the process of rethinking human remains in museums, not only those on display. One example is the Manchester Museum which early on initiated community conversations on its display of Egyptian mummies, while the Pitt Rivers Museum in Oxford has done some fundamental community work and policy outlining on its human remains in general. I have just started a fellowship at the Science Museum London looking at the Wellcome Collection human remains, and I look forward to researching policies and practices in the UK further.

NS: What is one thing you wish everyone knew about Egyptian mummies?

AS: That they were studied in Europe and in the USA to prove the white origin of civilisation. I think it is incredibly important that we know that the ancient Egyptians were used to frame racial (and racist) theories, and that prominent individuals worked on proving that the ancient Egyptians were white because their achievements could then be used as proof of Caucasian achievement. I think this is crucial because the debate around the ethnicity of the ancient Egyptians comes back into the news every year and it is always a very heated debate, but we don't talk about the fact that there is a deeply rooted history of scientific racism which is linked to the ancient Egyptians. In addition, I think it is important to be careful about making light hearted jokes about the aliens building the pyramids and so on, because the root is the same: it is the idea that people from non-white origin cannot have produced such advanced architecture, medicine, astronomy etc. I am hoping this topic will be more widely featured in museums and in teaching.