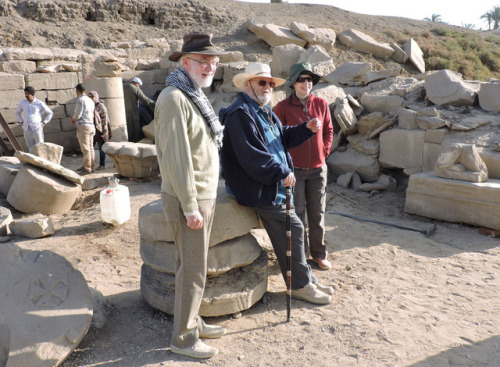 Jaap van Dijk and Julia Harvey were not able to join us for the season, but they arrived for a short visit on February 14. While they talk about what is happening on the south side of the court, work on the columns continues behind them.

How to build a round column base using rectangular bricks. It takes careful measuring and placement. This is the new base for the column whose original base we discovered last week and had to cover again.

By February 9 the new base was finished, but it had to cure for another day.

The first column drum is moved onto the new base. We are using a new and better siba (support and winches) this year, one that allows the column to be lifted and moved horizontally in one operation. It's a big improvement on the old tripod siba we used in the past, which had to be repositioned constantly to move blocks.

On February 12 the third column drum was lifted and lowered into place.

Using a crowbar Salah and Anwar gently shimmy the column drum into its final position. It takes both skill and patience to move the block that last few centimeters without damaging the stone.

Only half of the fourth column drum was left and it broke in two pieces while being moved. Salah perches on top of the column while waiting for the upper piece of the last drum (being carried by the three guys in the foreground – sandstone is heavy!) to be winched into place.

By the end of work on Thursday, both columns were back in place. Next week we will tackle the heap of column drums in front of them, in the hopes of being able to rebuild a third column.

People sometimes ask how ancient sites can disappear. One answer is wind, as these two statues demonstrate. Maurice Pillet, the French archaeologist who excavated Temple A in the 1920s, repaired the left statue and set both up on paving in front of the second Pylon. In the intervening 90-odd years, almost 50 cm of windblown dirt accumulated over them and over the whole court, including the column base Richard wrote about last week. Imagine what 1,000 years of blowing sand and dirt can do, particularly when combined with pillaging by people looking for useable materials like brick and stone.

Once we had the bases fully exposed, we realized that the statues are both too heavy and too fragile to be moved safely, so we will have to leave them where they are.

It's not totally hopeless, though. We can at least put the upper half on a small platform (called a mastaba), under construction at the left of this photo. We have also built a baked brick wall around the area of the two lower halves in hopes of preventing them from being reburied.

In the foreground is the rear part of the sphinx we moved last week. Its broken pieces have been reattached and await their final restoration.

While the conservation work was going on, we continued excavating the south side of the court. Shergawi Abbas, another Qufti, joined us this week and immediately began work on the Nitocris chapel.

By the end of the week the chapel had been completely cleared and we were able to see the paving in its front room for the first time.

In the meantime, we finished up in the central area. Here you are looking west to the second Pylon from the Nitocris chapel. The north (front) edges of the limestone rectangles clearly appear to line up, suggesting that they are indeed the bases of sphinxes that were dismantled down to their foundations at some point. The foundations then served as the floor for the other structures built in the area.

With work in the central area done, Ayman began to clear the windblown earth off the western area, where we first found limestone rectangles/sphinx bases in 1996. We have no idea what kind of a structure the blocks forming the north border of the area came from. All have round holes with channels. Perhaps they were originally the foundations for a temporary structure and were re-used when that structure was no longer needed. We will probably never know.

I'm afraid there won't be any pictures of birds in the sacred lake this year. The reeds have taken over almost completely, and there are only a few spots now where you can even glimpse the water.