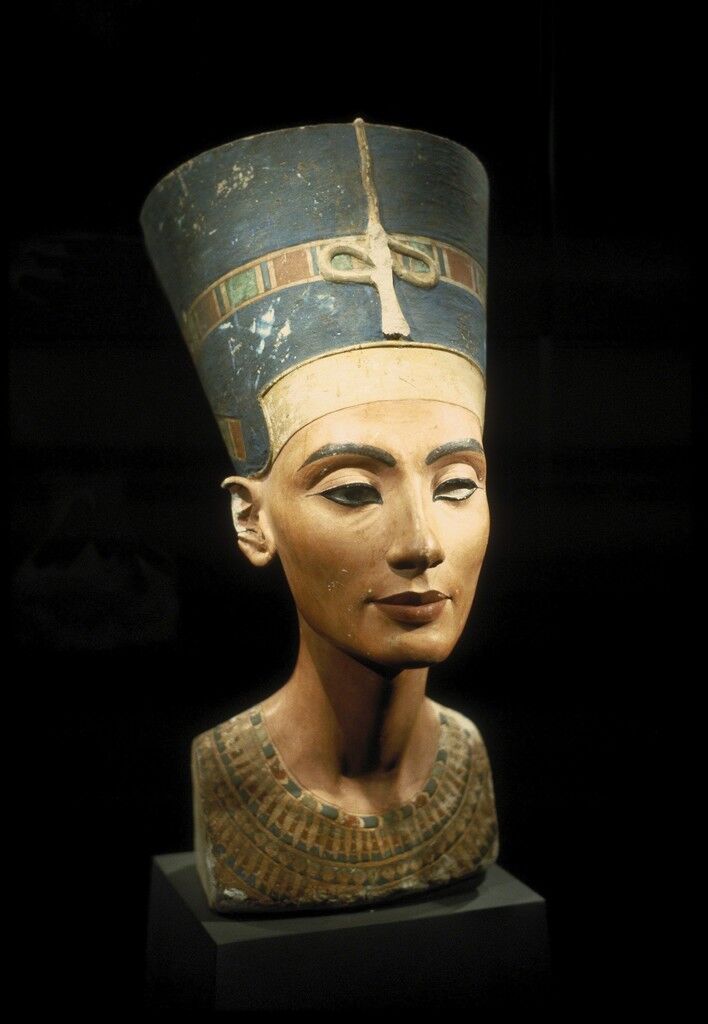 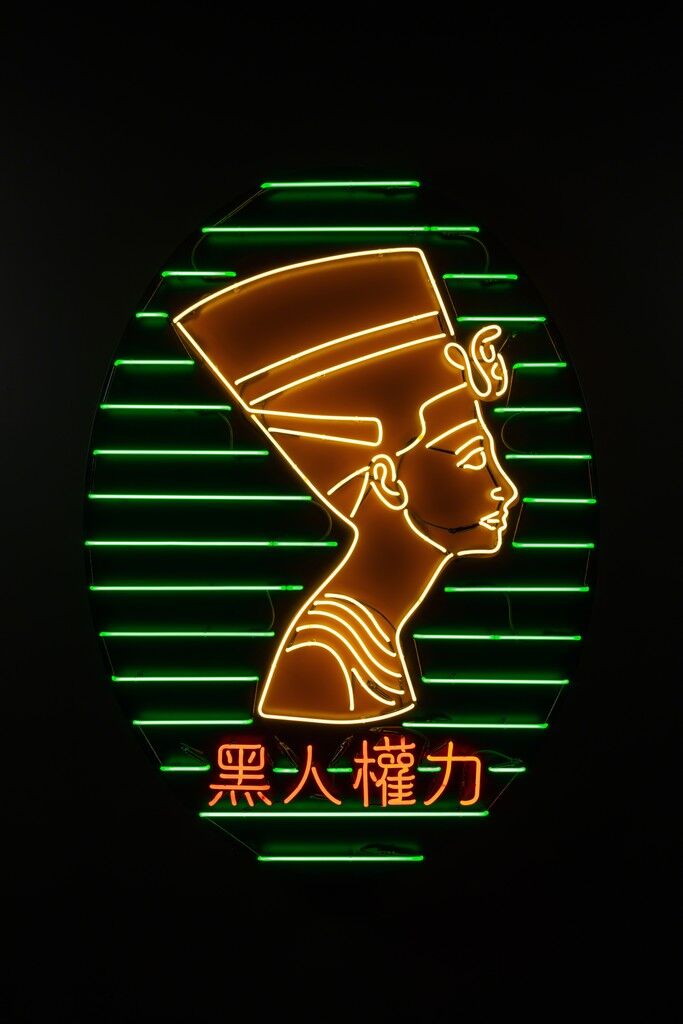 Awol Erizku
Nefertiti (Black Power), 2018
Ben Brown Fine Arts
Since its discovery in the early 20th century, the bust of Nefertiti, a work of limestone and stucco crafted by the sculptor Thutmose around 1345 B.C.E., has cemented the ancient Egyptian queen's relevance as a global pop-culture icon. The Nefertiti of the infamous sculpture dons her signature cap crown, an extravagant royal blue headdress with a golden diadem band and elaborate designs, which suggest a power embellished by an elegant aesthetic. Beneath it, her face—symmetrical, poised, and objective in its beauty—is a reminder of the allure that has made the bust of Nefertiti one of the world's most enduring artworks.
A testament to her staying power in popular culture, Nefertiti's likeness continues to be reimagined by contemporary artists around the world. Through their adaptations and homages, these artists' works bridge the gap between antiquity and modernity. Yet the sculpture is also the subject of heated debates; the significance of Nefertiti's gender and questions surrounding her racial identity have forged schisms in her modern cultural appeal. Over the past few decades, German, Egyptian, and American artists, in particular, have pushed matters of race and gender to the forefront of the discourse surrounding Nefertiti, calling on us to consider what it means to co-opt, distort, and reimagine the image of an African queen to whom many feel entitled. 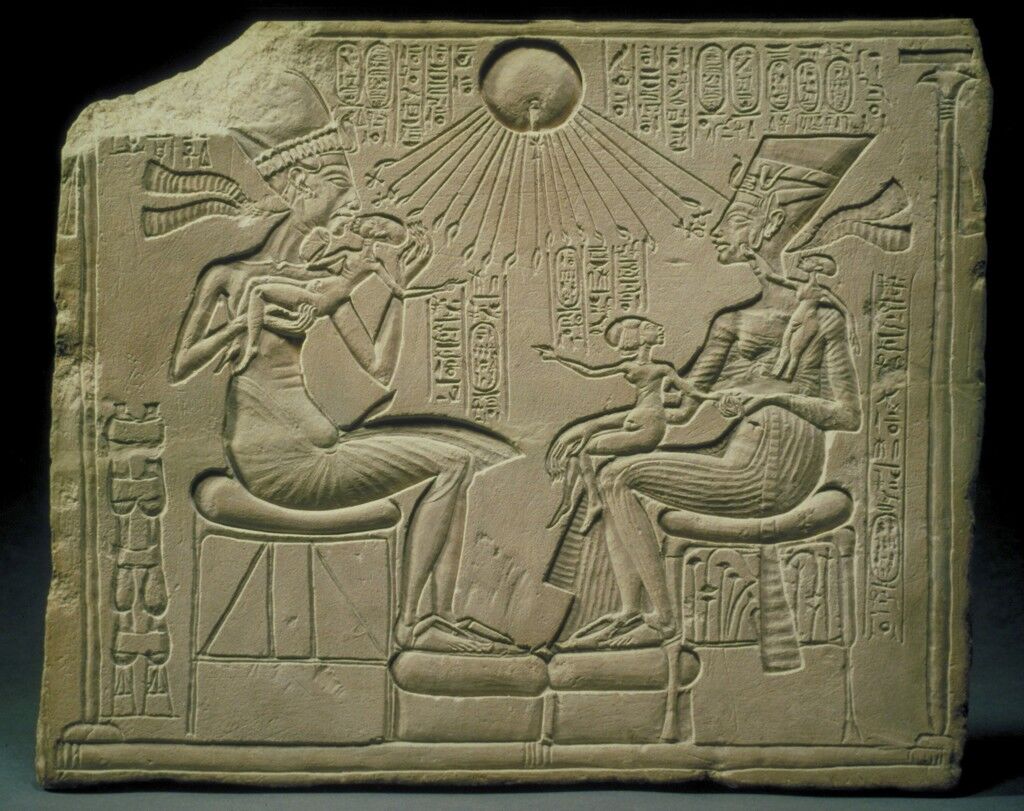 Akhenaten, Nefertiti, and the Royal Princesses, 1348-1335 B.C.
Aegyptisches Museum, Berlin
The German Oriental Company uncovered the bust of Nefertiti on an expedition in Amarna in 1912. A sponsor of the excavation lent the sculpture to the Neues Museum in Berlin in 1913, where it has been housed ever since. Germany's claim to the ancient artwork has been contested by Egyptian authorities and activists alike. Within this geopolitical landscape, a number of German artists have explicitly engaged with Nefertiti in their artwork as a means of exploring ideas about identity and ownership.
In an untitled 2012 work by
Isa Genzken
, the first in the "Nofretete" series (2012–18), Nefertiti appears as we've never seen her. Seven busts of the queen sit on individual white podiums, the first of which is cinched by a hot red corset, as if to implicate a restrained body. Every iteration of Genzken's Nefertiti dons a different style of designer glasses, some for reading and others for stunting. Smudging the difference between mannequin and bust, Genzken's incorporation of high-fashion goods complicates Nefertiti's glamour and self-possession, as if to suggest that she is as much a commercial icon as she is a historical one.
In his 2017 bronze work Quantum Nefertiti, German sculptor
Julian Voss-Andreae
presents the monarch as unburdened by time or corporeal form. Voss-Andreae's sculpture adheres to Nefertiti's traditional representation as a bust, only to abandon the objectivity prioritized by portraiture. Quantum Nefertiti is composed of evenly spaced sheets of bronze connected to suggest the form of the bust. Yet here, she has no face, only gaps where it should be—perhaps an effort to make space for all our ideas of her. 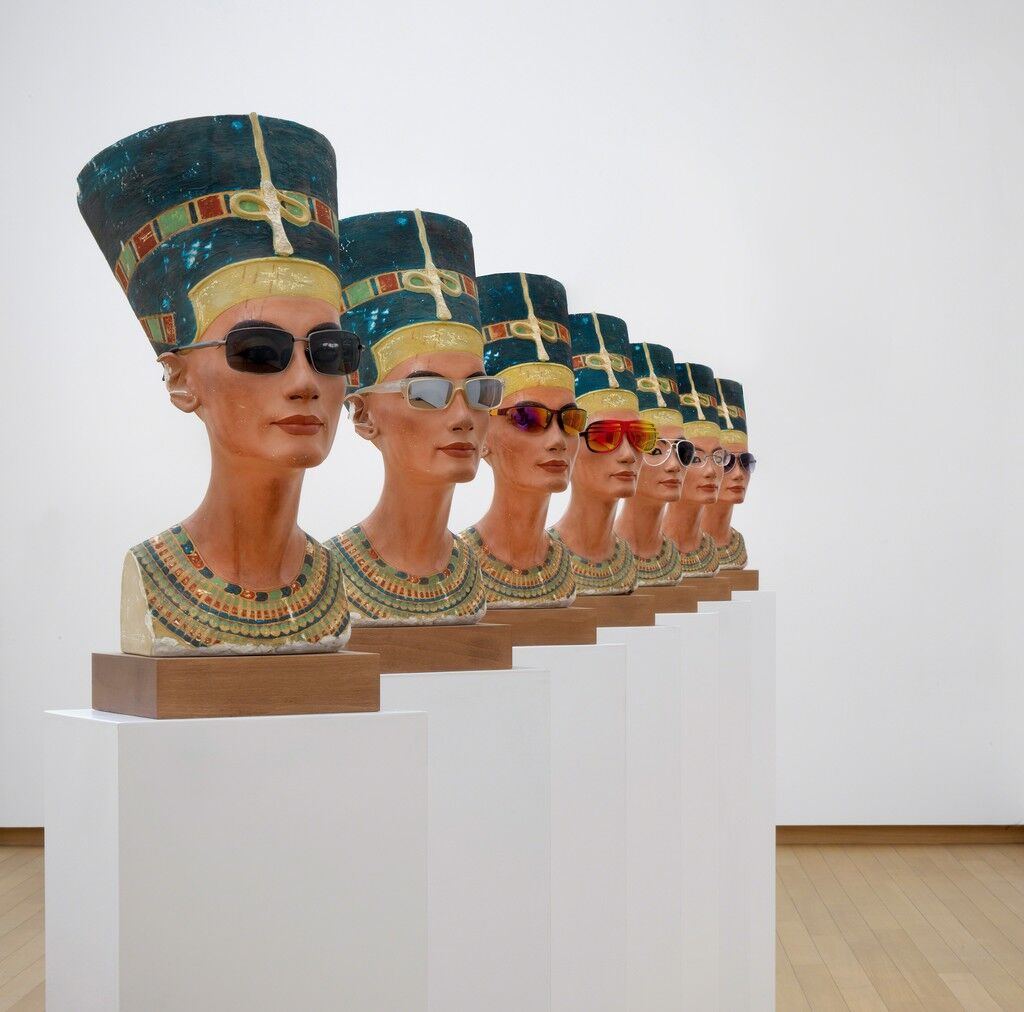 Isa Genzken
Nofretete, 2014
"Isa Genzken: Make Yourself Pretty!" at Martin Gropius Bau, Berlin
Berlin-based artists
Nora Al-Badri & Nikolai Nelles
, on the other hand, converted their ideas about Nefertiti into action. For their 2016 work The Other Nefertiti, the artists produced multiple 3D prints of the bust. Performing an act of symbolic repatriation, they donated one of the replicas to the American University in Cairo and additionally shared the 3D printing data online. A starch-white rendering of the original, the pair's polymer resin bust compellingly straddles the line between blank and vacant; The Other Nefertiti is an unmarked canvas ready for her homecoming.
Pushing back against Western claims on Nefertiti, African artists have been making their own arguments for the queen's ethnic and national belonging. In his 2018 solo exhibition "Nefertiti" at the Zamalek Art Gallery in Cairo, Egyptian artist
Hossam Dirar
debuted a series of oil paintings that return the ancient monarch to Egypt—and a symbol to her humanity. In his paintings, Nefertiti is pictured with legs, arms, and even wings, offering a rendering of Nefertiti as a divine leader who is both formidable and familiar. These paintings explode with color, and commingle modern and ancient fashions—off-the-shoulder tops, sweetheart dresses, and ankh necklaces—that remake Nefertiti and her hallmark crown for a new world. In his plaster bust I used to be Nefertiti (2014), French-Moroccan artist
Mehdi-Georges Lahlou
asserts a kind of intimacy between himself and the sovereign. Casting his own face onto that of Nefertiti, Lahlou collapses artist and muse in order to consider the queen's image as a nostalgic symbol of femininity. 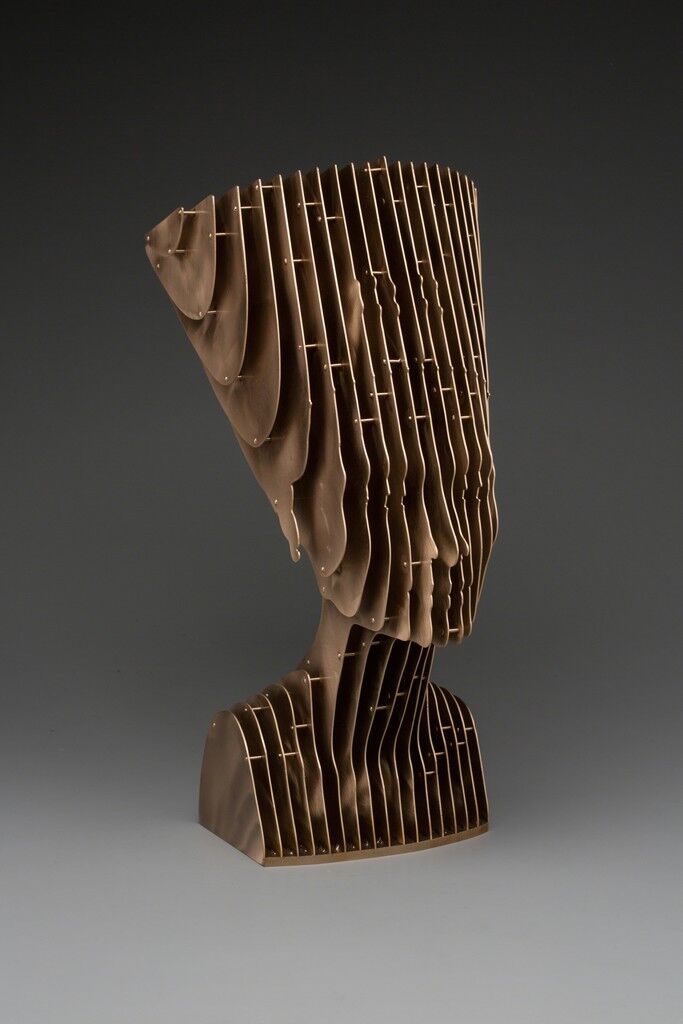 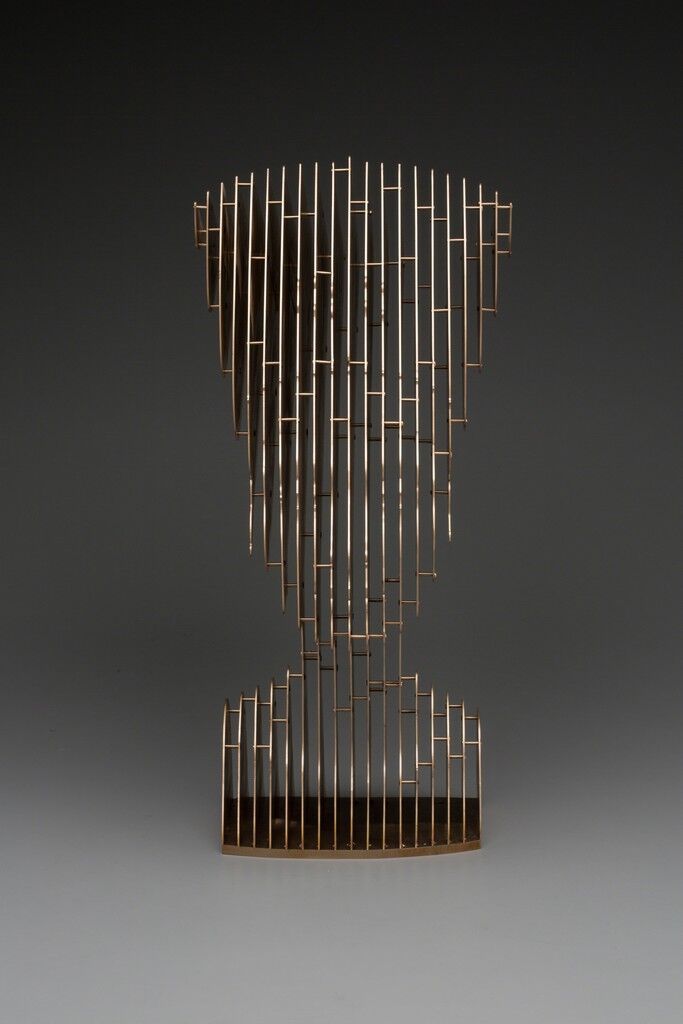 Julian Voss-Andreae
Quantum Nefertiti, 2017
HOHMANN
In America, artists of African descent have enlisted Nefertiti to examine their racial identity and heritage. Bronx-born artist
Fred Wilson
's 1993 project Grey Area (Brown version) offers five iterations of Nefertiti's bust in a spectrum of skin tones. By delivering variations of Nefertiti that appeal to our modern color-coding of blackness, brownness, and whiteness, Wilson asks that we determine what is at stake in dispelling or confirming Nefertiti's racial identity. 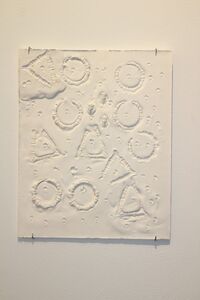 3 Images
View Slideshow
In Jamaican-American artist and critic
Lorraine O'Grady
's Cibachrome photography collection "Miscegenated Family Album" (1980/1994), sculpture reliefs of Nefertiti and her daughters are juxtaposed with photographs of O'Grady's own sister and nieces. Here, Nefertiti serves as mother, daughter, sister, and self. By drawing on the diasporic and the matrilineal, O'Grady imbues Nefertiti with black feminist significance.
In her 2018 work Composition of Doorknocker Earrings with Pharaoh Heads and Nefertiti Recesses, the Detroit-born, New York–based artist
LaKela Brown
brings Nefertiti into the fold of African-American material culture. The plaster slab features imprints of an archetypal Egyptian Pharaoh and fossil-like impressions of the Nefertiti bust alongside "doorknocker" earrings—a staple of African-American urban fashion. By tethering together hallmarks of contemporary and ancient aesthetics in plaster, Brown elevates this popular modern accessory by asserting its proximity to ancient Egypt, showing once more that Nefertiti is among the most powerful symbols of the African diaspora. 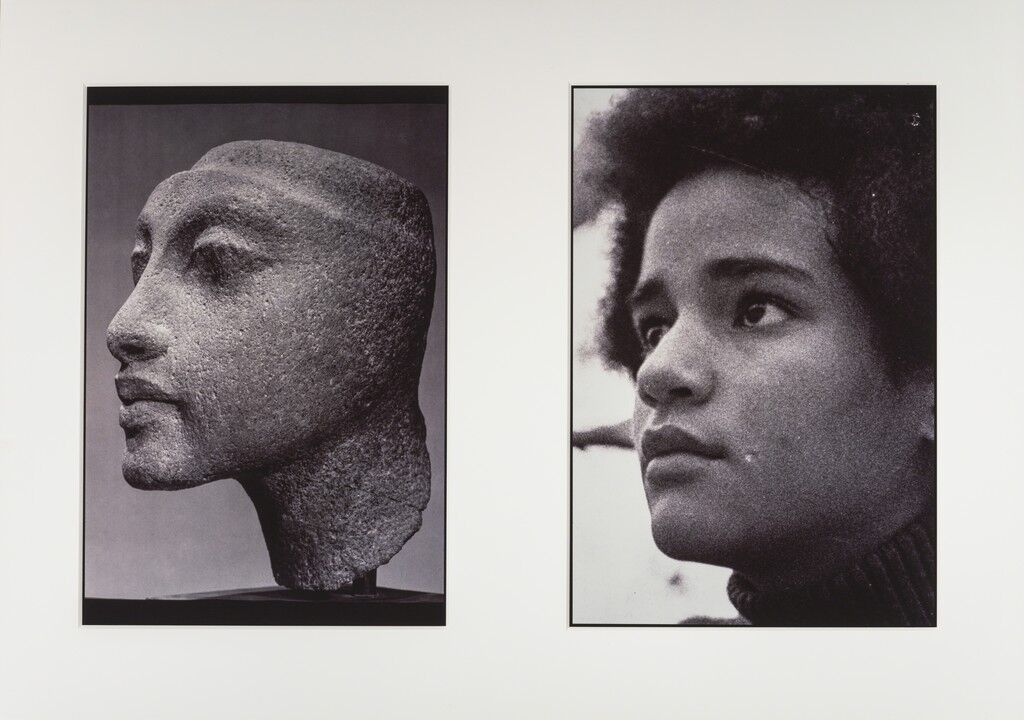 Lorraine O'Grady
Sisters III (L: Nefertiti's daughter, Maketaten; R: Devonia's Daughter, Kimberley), from the "Miscegenated Family Album", 1980
The Studio Museum in Harlem
In his numerous works featuring Nefertiti, Ethiopian-American artist
Awol Erizku
argues for Nefertiti's utility as a historical reference point for black cultural dominion and extravagance. In Nefertiti (Black Power) (2018), the profile of the Egyptian queen is lit up with neon lights. As a medium that doubles as an advertising tool, neon lights are often used to intrigue consumers. This neon Nefertiti denies the viewer eye contact, drawing us in while keeping us at a distance. In Nefertiti—Miles Davis (2017), Erizku continues to connect Nefertiti with black culture, this time by transporting her to the 1970s, disguised as a disco ball.
For all the lore that surrounds Nefertiti's image, very little is known about the life of the "beautiful one," as she is called. In fact, Nefertiti largely disappeared from the historical record by the 12th year of her husband Akhenaten's reign, when she was around 30 years old. Yet as an ancient muse, her cultural potency is only enhanced by this mystique. Without it, she would not be fit for the artistic and political projection that remains foundational to her posthumous reception. By inciting our engagement with the politics of race, gender, and colonial entitlement, Nefertiti has effectively surpassed the royal reach that once marked her dynasty. In exchange for this influence, she must remain a figurehead, her 21st-century fame marked by the disembodied power of a bust.
Jordan McDonald
Posted by Glenn Meyer at 10:03 PM