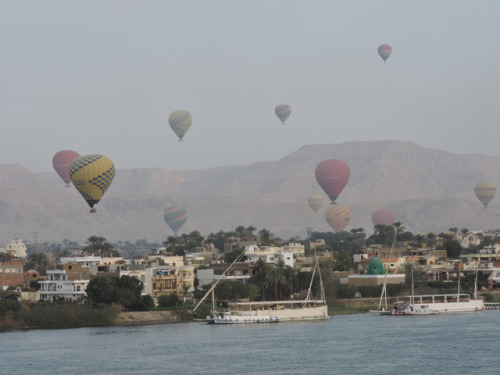 We arrived in Luxor on February 1 and had a day off to relax and get over jet lag. As always, the view across the Nile is spectacular, particularly in the early morning with the balloons flying over the west bank.

After finishing all the paperwork involved in starting a season on Sunday, we began work on Monday, February 5. Our inspector this year is Dina Yousuf Abdallah, a graduate of the American Research Center in Egypt's archaeological field school. We are very happy to have Dina with us.

Once again our foreman is Abdel-Aziz Farouk Sharid (left), and we are fortunate to have his brother, Ayman, working with us as well. Both are excellent and experienced archaeologists.

Along the south side of Temple A's First Court runs a raised colonnade. At the east end of the court is a chapel dedicated to Nitocris, a God's Wife of Amun during Dynasty 26 that we discovered in 1980. In 1996 we uncovered a row of limestone rectangles bounded on the south by the colonnade, on the west by the 2nd Pylon, on the east by a sandstone wall, and on the north by a row of sandstone blocks. We suspect the limestone blocks are the remains of sphinx bases that were incorporated into the flooring of whatever this feature is, particularly since the westernmost segment was cut in half by the construction of the temple's 2nd Pylon in Dynasty 25. As you can see in this photo looking south across the court, both the limestone and the chapel have become obscured by windblown dirt in the intervening years.

This year we decided to explore the area between the two features to see if we can figure out how they relate. By Thursday, Ayman had cleared the face of the colonnade and the west wall of the Nitocris chapel (background) and had uncovered a pair of walls running east from the wall bounding the limestone bases (foreground), some paving associated with them, and two small north-south walls just west of the Nitocris chapel. We have no idea what they are yet, but hope that further work will make things clearer.

We also planned a couple of what we hoped would be fairly simple conservation projects. On the north side of the same court stand three pieces of granite statues of Ramesses II and a broken and tilted rear half of a sphinx. We intended to move all four sculptures onto bases that will isolate them from further damage by the damp and salty soil. More about the statues next week.

We are fortunate to have the conservator, Salah (in the blue sweater), working with us again this year, aided this time by Anwar (foreground). Once they had removed the broken pieces from the sphinx, it was a fairly easy matter to move the largest piece onto its new base using simply a crowbar and rollers – and considerable skill.

Once the base was properly positioned, Salah and Anwar could begin treating the statue.

The north side of the court also has a colonnade along its north wall, but these columns are mostly fallen and little remains. Our second project this season was to re-erect at least the two columns in the northeast corner of the court. These two, with four drums each preserved, seemed worth putting back together. Simple, right? Just roll the column drums aside (relatively easy – no winch needed), build new bases for them and use a tripod and winch to put the drums back in place.

It turns out the situation isn't simple at all. Much to our surprise, when we rolled the lowest drum of the eastern column out of the way we discovered that the original base still exists, although its two halves – of very differently colored sandstone – are badly deteriorated. Even more surprising is that the base sits on paving that is about 50 cm below modern ground level!

Since we don't have time to excavate the whole north side of the court nor to consolidate and rebuild the column base, we have decided to cover it with a protective sheet of plastic and lay down a thick layer of sand covered by earth. On this firmer ground we plan to build a new "base" for the column drums so we can set them up in their original location if not on their original base. If that works our, we'll do the same with the second column.

There's often a surprise waiting for us back at the hotel. The housekeepers get very creative with towels.  Sometimes we get a swan, but on Wednesday we were greeted by this ship sailing on the Red Sea.

At the end of the day it is very pleasant to sit on the hotel balcony and watch the feluccas sailing along the Nile. What a view!