George Reisner, who died in 1942 at the so-called Harvard Camp in the shadow of the Great Pyramids, became an archaeologist almost by accident. But the Harvard Egyptology professor wound up making seminal discoveries and transforming the field, creating a suite of modern methods that underpin fieldwork around the world today. Peter Der Manuelian, Harvard's Barbara Bell Professor of Egyptology, has been fascinated with Reisner's work for years and created an online database, The Giza Project, of expedition documents, photographs, and digital models and tours as a resource for colleagues interested in Egyptian archaeology at Giza. Manuelian recently completed a biography of Reisner, "Walking Among Pharaohs: George Reisner and the Dawn of Modern Egyptology," that paints a portrait of the man and what some call the golden age of Egyptian archaeology. Manuelian spoke with the Gazette about Reisner, his Harvard ties, his impact on the field, and the complexities of understanding the historical context in which he worked.

GAZETTE: Many may not be familiar with George Reisner. Who was he and why is he important?

MANUELIAN: He came to Harvard in the Class of 1889 and got his Ph.D. in 1893 in Semitic philology. He met Phoebe Apperson Hearst, the mother of William Randolph Hearst — the newspaper magnate — who was looking for archaeologists to enhance the University of California, Berkeley, collections. Reisner saw the plunder and the danger that the sites in Egypt were in, so he thought he would give archaeology a try, and Hearst gave him a five-year contract. He had to basically learn on the job, but he was off and running as an Egyptologist and archaeologist. He became a founding father of modern, responsible scientific method. That meant working carefully, documenting all aspects of the dig before you start, during the work, and the in situ discoveries. It meant keeping diaries, having a numbering system and a logbook for all the finds, and taking interdisciplinary approaches. He lived and worked at the Giza Pyramids, in a cluster of mud brick huts called Harvard Camp that was really his only home for more than 40 years. He worked out the chronology and the history of the Fourth Dynasty of the Pyramid Age, about 2500 BCE. Alongside an Italian, a German, and later an Egyptian expedition, he excavated two-thirds of the tombs of the elites surrounding the pyramids themselves.

GAZETTE: We may accept his field methods and detailed documentation as an obvious standard, but weren't they controversial at the time?

MANUELIAN: The generation before him was about, "Let's get the statues and other finds and take them home." It was basically plunder. The museums doing most of the collecting were in Europe. He led the first legitimate Egyptian expedition from America, and after his success, the Metropolitan Museum and the Penn Museum said, "Hey, we should get into this game too."

His other big contribution was in Nubia — modern Sudan — opening up Nubian studies as a separate discipline. He investigated several royal pyramid fields, cemeteries, fortresses built along the Nile, and temples.

GAZETTE: Nubia is much further up the Nile?

GAZETTE: How did racial attitudes affect Reisner's views of Nubia?

MANUELIAN: People at the time were studying cranium size as an indicator of intelligence and trying to explain the greatness of these ancient civilizations as being tied to Mediterranean or to European cultures. Reisner wasn't tied to eugenics and ideas about racial superiority that some others were obsessed with, but he was curious about who these people were and where they came from. In the case of the Nubians, he got a lot of it wrong. He really thought the Nubians must be Libyans who emigrated southwards, or resettled Egyptians. He had trouble wrapping his head around an indigenous, great, African Nubian civilization.

I've divided the attitudes at that time into what I call "ancient racism" and "modern racism." Ancient racism is the issue of "Where did these people come from? Did they have white European ties or not?" And in the early 20th century, depending on what decade you're talking about, the theories range from, "They must have come in through the Levant." Then, as anti-Semitism rises, the theory changed to "Oh, they must have come in through Libya." And it goes back and forth.

Modern racism is about how expeditions functioned, the feeling that Western archaeologists were entitled to excavate, take the finds home, and pay little attention to Egyptian desires. It all plays out against the backdrop of the British running the government in Egypt from 1882 onwards, the French controlling the Antiquities Service, and the Egyptians in the background, struggling for independence.

Modern racism as it applies to Reisner is more complicated. Reisner favored British rule because he believed it stamped out corruption and protected the Egyptian population against what he viewed as a suspect and corrupt elite Egyptian class in Cairo. He was also very progressive, stood up for his workmen, and saw the country through their eyes. He took a much more enlightened view than some of the other American and European excavators who really looked at the Egyptians as just cogs in their expedition machine. They didn't give them much credit or acknowledgement. We're really trying to change that now, to go back and figure out who these Egyptian workmen and foremen were. Even though they're often not credited in photos and we just have their names on paysheets and lists, we're trying to do justice by them. 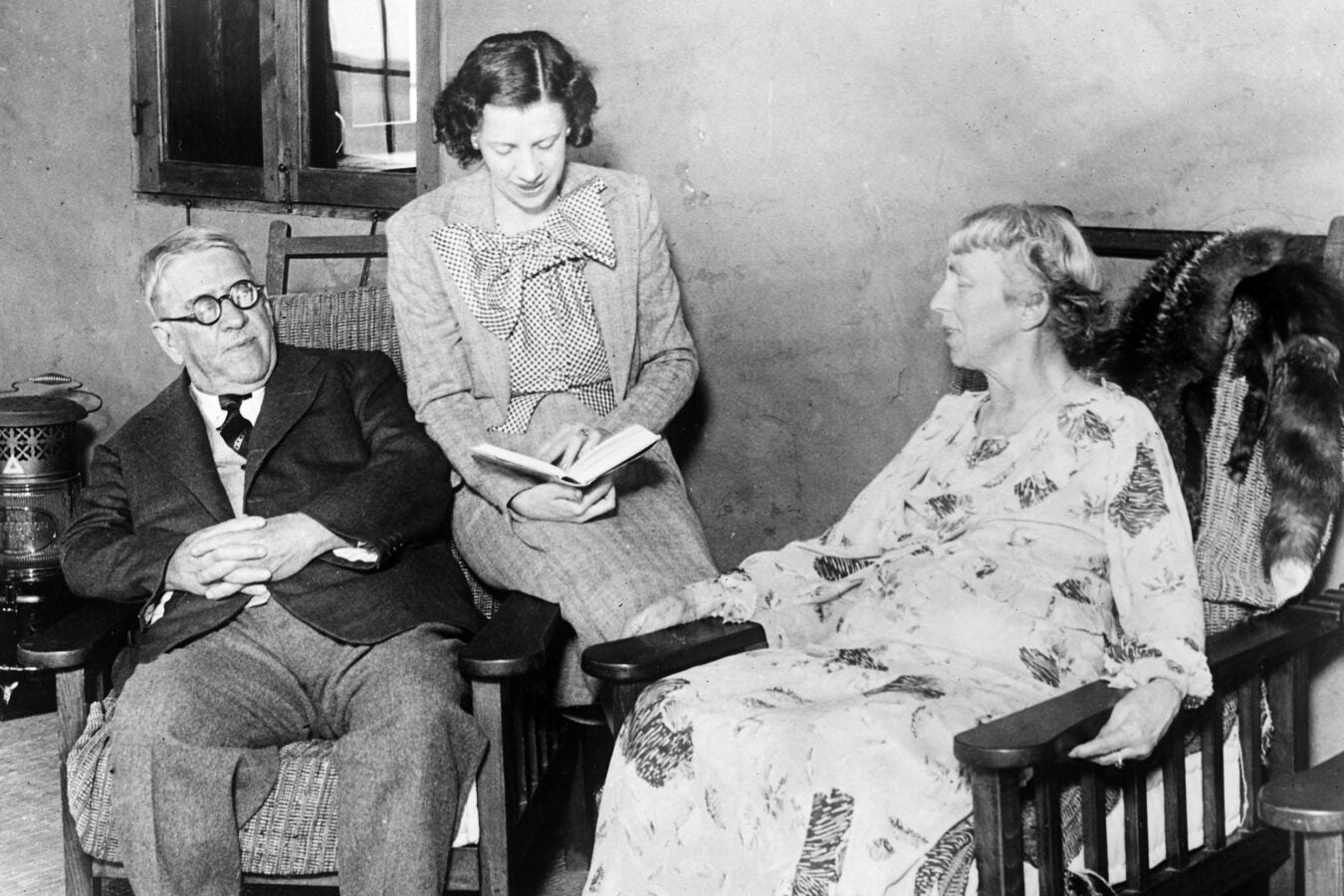 GAZETTE: He held the title of professor of Egyptology, which you have now, but came back sparingly to teach. What can you tell us about his Harvard career?

MANUELIAN: He definitely had a Harvard loyalty. In 1904, when Phoebe Hearst was strapped and pulled her financial aid, suddenly Reisner was high and dry. That eventually led to a one-year agreement in 1905 to form the Harvard University-Boston Museum of Fine Arts expedition. It continued for another 40-plus years basically on a gentleman's agreement. In 1910, Reisner became the second MFA Egyptian curator, a post he held until his death. Harvard didn't pay Reisner in these early decades at all. The MFA was footing the bill for the excavations because they wanted to expand their collections. Harvard President [Charles William] Eliot said, "We're not trying to create a competing Egyptian collection in Cambridge. We want the archives; we want the publication rights; we want the scholarship." It was only later that Harvard stepped up and said, "We ought to be paying this guy something too." Reisner was at times frustrated with the University and the museum in terms of their support. His teaching semesters were 1911, then not until 1921 — World War I was a real mess — and then 1925. That's when one of his most famous discoveries at Giza occurred: the hidden burial shaft of Queen Hetepheres, the mother of the builder of the Great Pyramid. That was a hugely significant find. And then his last teaching semester was in 1929. He doesn't get back again until he is blind from cataracts in 1939 and gets an honorary degree. It was also his 50th class anniversary. It's a great honor, but at first he didn't want to lose the work time with the long trip home. They talked him into it.

MANUELIAN: After a month in Boston, he returned to Egypt, then suffered some strokes, and was bedridden for the last year of his life up at Harvard Camp, near his beloved pyramids. He died there in 1942. He was buried in the American Cemetery in Cairo, and efforts are currently underway to restore his headstone.

GAZETTE: So, even when he was ill, he stayed there instead of coming back?

MANUELIAN: He kept on writing, even trying to type when he couldn't see. You should see his later letters. If his fingers are off by one key, you have to decipher them yourself. But he never complained and even through his blindness he never stopped working. He kept running the show. He had a team around him making drawings and typing up his publications. There are thousands of pages of unpublished manuscripts that we've put on the Giza website.

GAZETTE: Have subsequent archaeologists worked through the backlog of data from his finds?

MANUELIAN: At almost all of his 23 sites in Egypt and Sudan, new expeditions are active, asking different research questions, and adding to Reisner's knowledge base.

In terms of his expedition records, that's really what prompted the biography. I was doing the Giza Project at the Museum of Fine Arts — that started in 2000 — and the goal was basically to scan all the photos, type all the diaries, database all the objects, and then link them online for the world community. As we were creating this online archaeological tool, we came across all the other expedition correspondence — the letters and the gossip and the scandals — and I felt that this is a story that should be told.