ANE Today - How Did the Kings of the Late Bronze Age Deal with Rumors?

How Did the Kings of the Late Bronze Age Deal with Rumors?

In the Late Bronze Age, a so-called Club of Great Powers arose and divided the control of the Ancient Near East among themselves. These powers included Egypt, Mitanni, Babylon, Assyria, the Hittites, Arzawa (a kingdom in western Anatolia), and Alašiya (a kingdom on the island of Cyprus).

To ensure their dominance and to maintain diplomatic peace, an effective communication network was necessary to allow the rapid flow of vital information between royal courts. But how did they deal with misinformation, or as we would put it, fake news?

The Great Kings were most interested in the news of other kingdoms pertaining to issues of common concern, such as local politics or even natural disasters such as plagues. Official communication was largely conducted by means of messengers and envoys, and kings were keen to host a large number of envoys in order to ensure the rapid flow of information. Conversely, if the news was interrupted, perhaps by one king preventing or delaying another king's envoy's travel, relationships could deteriorate. Misunderstanding arose on many issues as a direct result of the absence of official conduits for information.

Given the vast distances between the palaces and the slow travel speeds (especially compared to the modern era), relations between kingdoms were particularly sensitive to disruption by the many varieties of fake news: accidental misinformation, deliberate disinformation, as well as gossip and rumors, which threatened to upset international diplomacy, trading links, and unobstructed travel between states.

Rumors were a particular concern since this form of misinformation threatened the potential loss of prosperity by upsetting otherwise friendly economic policies and peaceful diplomacy. As a result, the kings did not hesitate to cooperate and to resolve contentious issues using diplomatic methods, including the regular exchange of messages and envoys and even very rare face-to-face meetings. In their exchanged letters, the kings were careful to explain their concern over misunderstandings and related difficulties.

One example comes from the correspondence exchanged between Egypt and Babylon, preserved in the so-called Amarna Letters (so named for their discovery at the short-lived royal city constructed at Tell El Amarna). These letters reflect the tension between the two powers, casting it as a product of the Babylonian envoy's negative experience at the Pharaoh's court and lingering court gossip about the welfare of the Babylonian princess languishing at the royal court in Egypt during the reign of Amenhotep III.

Amenhotep III wrote to his peer Kadašman-Enlil I, the Babylonian king, in order to respond to gossip and false reports delivered by the latter's own messengers concerned the fate of a Babylonian princess in the Egyptian palace. He complained that the Babylonian king's envoys were unqualified and did not recognize the princess (Amarna Letter EA 1): "Did you, however, ever send here a dignitary of yours—who knows your sister, who could speak with her and identify her?" Amenhotep III was keen to present himself as the source of information and refute this fake news.

Amenhotep III stressed that she was still alive and wrote that he would have had no reason to cover up the news of her death, had she died. He went on to demand "Why don't you send me a dignitary of yours who can tell you the truth, the well-being of your sister who is here, and then you can believe the one who enters to see her quarters and her relation¬ ship with the king?" He sought to clear himself of any guilt of lying or deception. In order to reinforce the trustworthiness of his words, he swore in the letter that he had no interest in engaging in such conduct.

A similar case occurred during the reign of Ramesses II, who had married two Babylonian princesses just as Amenhotep III did a century earlier. As previously, the Babylonian messengers reported false news about their treatment when they came to visit the Babylonian princesses in the Egyptian Palace. Puduḫepa, the wife of Ḫattušili III, the king of Hittites, commented on this in her letters to Ramesses II after the peace treaty was concluded between the two powers. After the initial complaint, Ramesses II apparently responded by refuting and denying the accusations of Puduḫepa, directly quoting her allegation and then disputing it. That letter is lost, but we have Puduḫepa's response, which quotes Ramesses' letter quoting her initial complaint:

As for what you, my brother, wrote to me: 'Thus my sister wrote to me: "When messengers travelled to visit the Babylonian princess who had been given (in marriage) to (the king of) Egypt, they were left standing outside!" It was Ellil-bel-nishe, the Babylonian king's own messenger, who informed me of this.' Because [I] heard the information, should I not have written to my brother about it? (Catalogue of Hittite Texts 176)

Why a Hittite queen should have been told about this affair by a Babylonian envoy in the first place is unclear, except that such gossip was part of the fabric of international relations. The subtle circulation (and creation) of rumors to test reactions and change perceptions of rivals remains a part of diplomacy today, as does use of precise quotations to avoid misunderstanding.

Another example of rumors is recorded in a letter from Tušratta, the king of Mitanni. Amenhotep III had sent Mane, one of his most senior diplomatic officials, to Mitanni in order to escort Tušratta's daughter journey to Egypt where she was to become Amenhotep III's bride. Much time had elapsed since Mane's departure without any news of him. It seems that Tušratta had received a letter from Amenhotep III, containing news about the fate of Mane that the Mitannian king considered false. Amenhotep III may even had reached the conclusion that Mane was dead or sick.

Tušratta wrote back to Amenhotep III, explaining that Mane had been kept in Mitanni because of the time taken to prepare the princess's dowry and for her journey to Egypt. Tušratta assured Amenhotep III that he did not need to worry about his envoy's fate, that he was still alive, and that he, the king, was treating him respectfully:

Apparently, the rumors, false news, and gossip were frequent, forcing the Mitanni king to give further attention to the concerns of the Egyptian king in a subsequent letter. He stated:

And I want to say one thing more to my brother: In the presence of my brother evil words are numerous; one, who speaks (to him), is not (however,) at hand, those (evil words) do not come before the sight of a great one. (Now, however) an evil word was spoken (?) to the king; a babbler (?) has in a bad manner spoken to my brother ‹concerning› my person, he has denounced me. (Amarna Letters EA 24) 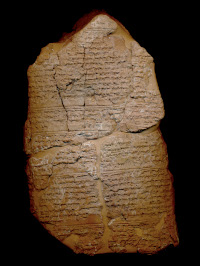 Thus, even the Mitannian ruler Tušratta felt compelled to exonerate himself of slander that someone had pronounced against him before Amenhotep III.

The exchanged letters indicate also how kings of the Ancient Near East aggressively sought to address misunderstandings on any matter, since a failure to respond could allow rumors, disinformation and false news to spread. The Assyrian king Ashur–uballit thus felt compelled to write to Akhenaten explaining why the latter's messengers were late: "As to your messengers having been delayed in reaching you, Suteans had been their pursuers (and) they were in mortal danger. I detained them until I could write and the pursuing Suteans be taken for me." (Amarna Letters, EA 16)

But earlier in the same letter, Ashur-uballit may also have revealed another reason why Akhenaten's messengers were late – a complaint about the paltry size of the Egyptian's diplomatic gift: "Is such a present that of a Great King?' Gold in your country is dirt; one simply gathers it up. Why are you so sparing of it?? I am engaged in building a palace. Send me as much gold as is needed for its adornment."

Likewise, when Ḫattušili III was alarmed that Kadašman-Enlil II, the king of Babylonia, had terminated his diplomatic mission to the Hittite palace, Kadašman-Enlil wrote back with various excuses: "Since the Ahlamu are hostile I have stopped sending my messengers. The King of Assyria prevents my messenger from crossing his territory." Ḫattušili III, however, was not impressed, replying "Only when two kings are at enmity do their messengers cease regular travel between them"

In the past, as today, the continual flow of accurate information between great powers was critical to successful diplomacy and to peace. Learning to read these messages, and reading between the lines, is a valuable skill for diplomats.

Mohy-Eldin E. Abo-Eleaz is Associate Professor History and Civilization of Egypt and the Ancient Near East at Minia University. His article, "Fake News and Rumors in the Diplomatic Correspondence between Egypt and the Other Great Powers during the XIVth and XIIIth Centuries BCE" was recently published in Revue d'Égyptologie.