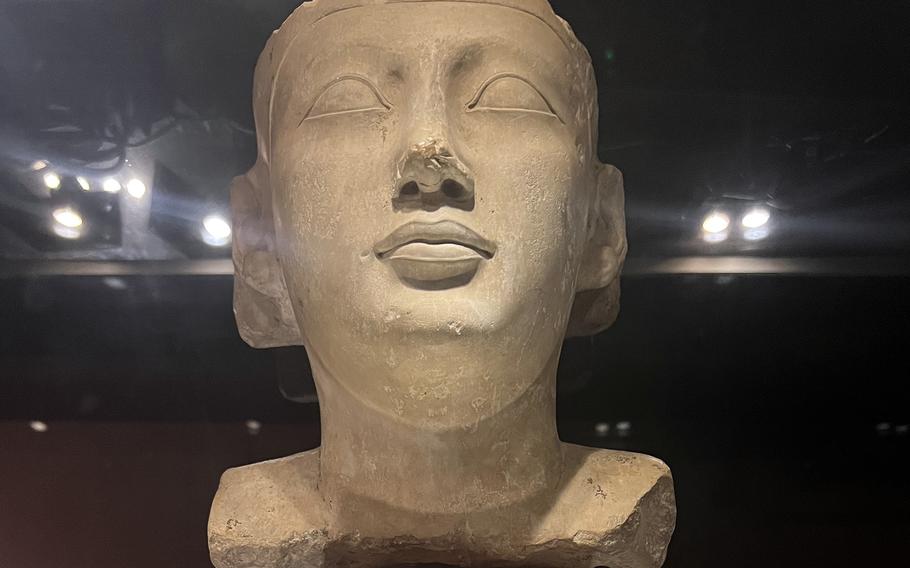 A bust of Ptolemy II Philadelphus, also known as Ptolemy the Great, inside the Museum of Ancient Egypt in Tokyo's Shibuya district. (Kelly Agee)

Pedestrians crossing the busy streets of Shibuya would never know that towering over them is a collection of ancient Egyptian artifacts in an eight-story museum.

The Museum of Ancient Egypt was the first in Japan dedicated to the ancient civilization along the Nile. It opened in the Maison Shibuya building in July 2009 and holds 1,000 pieces, Japan's largest collection of ancient Egyptian dynasty art, according to the museum website.

The exhibit contains items from the pre-dynastic period through the Roman empire.

The museum is a short walk from Shibuya Station. Exiting the building elevator, guests enter a small hallway where photographs of Egyptian sites are displayed. A small statue of Bastet, a cat's head with a woman's body, the goddess of protection, stands nearby.

The artifacts belong to Tadashi Kikukawa, a collector of Egyptian relics and founder of the museum. Kikukawa is a managing director with Nomura, a global financial services group, according to his LinkedIn page. The museum is open only on weekends. 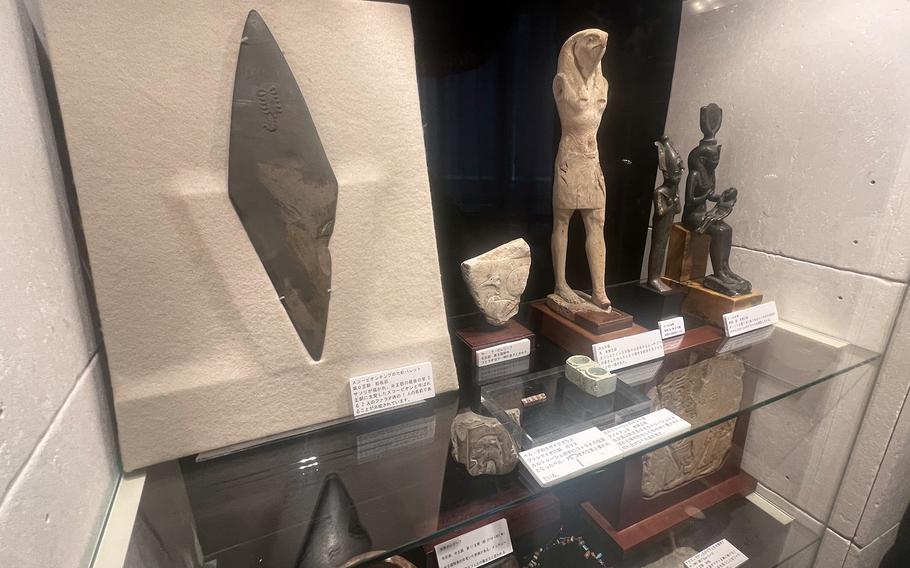 The Museum of Ancient Egypt in Tokyo was the first in Japan dedicated to the ancient civilization along the Nile. (Kelly Agee/Stars and Stripes)

Guests must exchange their shoes for uwabaki, Japanese house slippers, as they approach the museum foyer. There, they'll find artifacts and an antique couch where they may rest before continuing their journey.

A tour guide hands out flashlights that will come in handy later. The self-guided tour begins with an eight-minute video on the history of Egypt from ancient times to the present. It's available in Japanese and English.

A highlight of the exhibit is the burial chamber galley, a dark room where guests may employ their flashlights to inspect the exhibits. A wooden sarcophagus from the Ptolemaic Era, 305-30 B.C., adds a spooky touch to the room.

Don't worry, the sarcophagus is empty. The hieroglyphics that cover it depict the winged moon goddess, Isis, and Anubis, the god of death. The bottom part contains an excerpt from the Book of the Dead, in which the heart of the deceased is weighed on a scale against a feather that belongs to Ma'at, the goddess of truth, according to ancientegyptonline.co.uk, a site dedicated to ancient Egypt.

Other exhibits include the Excavation Hutt Gallery and the Temple Gallery, which contain busts of Egyptian leaders, including Ptolemy II Philadelphus, also known as Ptolemy the Great, pharaoh from 284 to 246 B.C.; serpents, which symbolized guards; Egyptian currency; and stones inscribed with hieroglyphics. 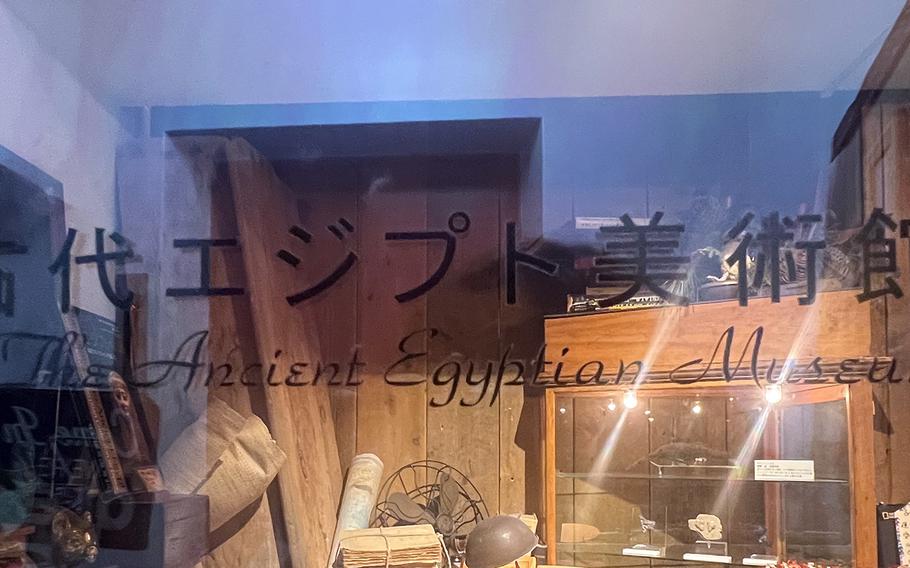 The Museum of Ancient Egypt in Tokyo is a bizarre find that lovers of history must see. (Kelly Agee/Stars and Stripes)

A fortune teller will read visitors' fortunes using Egyptian-themed tarot cards. Mine indicated I need to stop overthinking relationships and communicate better. It also suggested I have a compatible personality.

In the museum gift shop are books on ancient Egypt and fortune cards, which are sold individually, for 150 yen, or about $1.10. I purchased the card that depicts the ankh, a familiar cross with a teardrop loop on top. The card bears the admonition: "You can spend every day energetically and healthy; being fit and healthy will help you work and study well."

The Museum of Ancient Egypt is a very bizarre find that lovers of ancient Egyptian history must see. 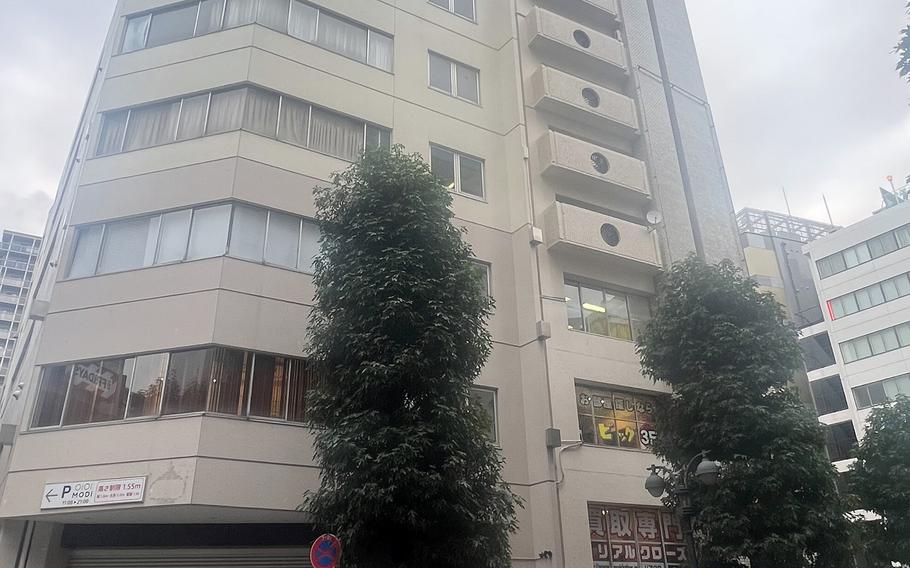 The Museum of Ancient Egypt is a short walk from Shibuya Station's famous Hachiko exit. (Kelly Agee/Stars and Stripes)

Directions: A short walk from Shibuya Station via the Hachiko exit.

Food: Plenty of restaurant options nearby.