Death on the Nile: The radiologist who solved mysteries of pharoahs' violent end | Middle East Eye

Death on the Nile: The radiologist who solved mysteries of pharoahs' violent end

Sahar Saleem discovered the knife wound in the throat of Ramses III, which was most likely the cause of his death 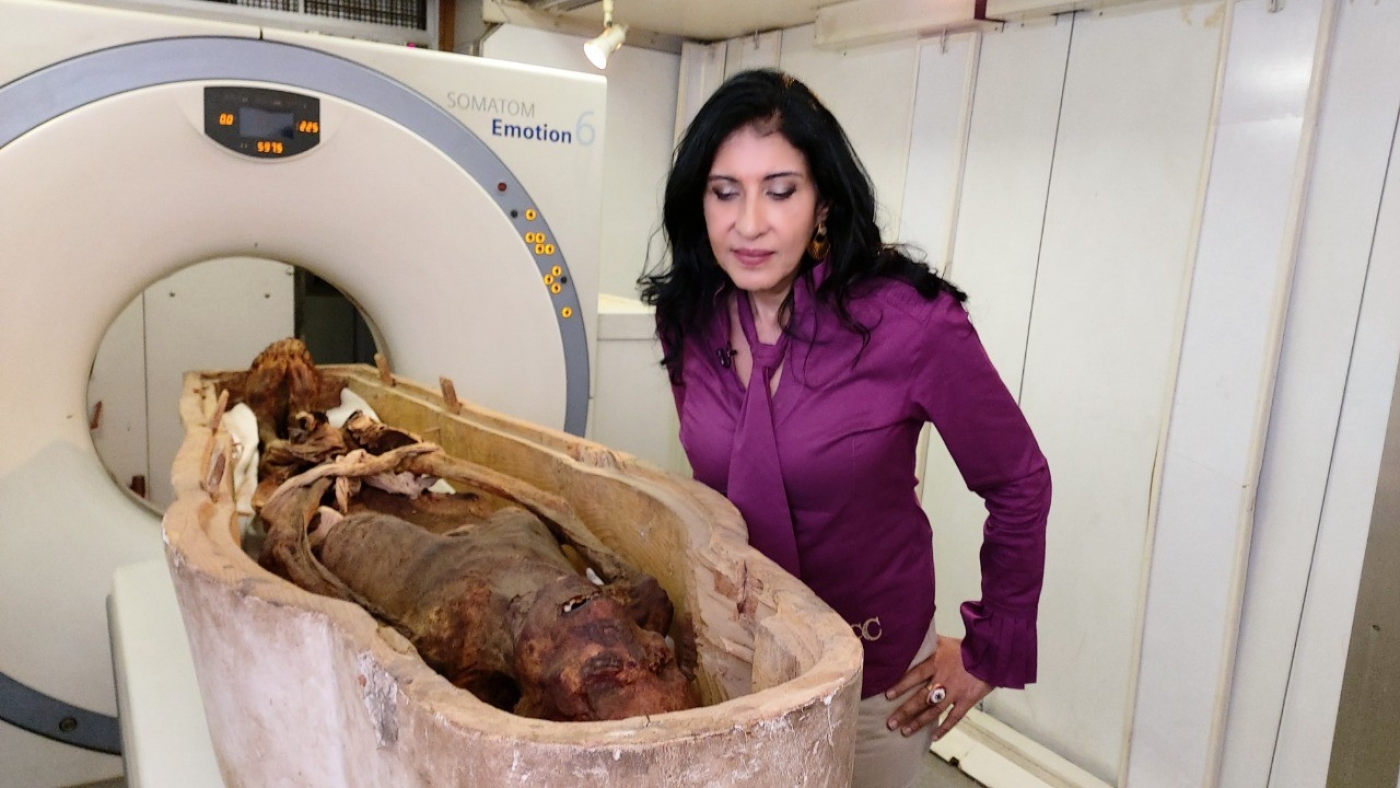 A number of 3,000-year-old mysteries of Egyptology have finally been solved in the last two years, with new revelations about how pharoahs of ancient Egypt lived and died, and how they looked when they were alive.

One radiologist in particular played a leading role in these discoveries, including a look inside Pharaoh Amenhotep I's coffin using CT scan technology last year.

The project, led by doctor Sahar Saleem, a professor and the head of the Faculty of Medicine's radiology department at Cairo University, revealed a wealth of new information about one of Egypt's greatest and historic rulers.

The mummy, which was first discovered in 1881, has been surrounded by a number of mysteries and questions over the years, as historians were reluctant to potentially damage it by investigating it further.

However, Dr Saleem has managed to uncover a trove of findings, over three millennia later, through noninvasive CT scanning, which has produced 3D images of the mummy's body and face.

"It is the best discovery in the whole world, not just in Egyptian antiquities," Dr Saleem told Middle East Eye.

"What made the media excited about this discovery is that they were able to see the face of King Amenhotep I, the son of King Ahmose, conqueror of the Hyksos, after 3000 years.

'I saw the king's face for the first time. His bone shows that he was in good health'

"I examined the mummy through CT scans without peeling away the scrolls or causing any damage to the organic remains. I saw the king's face for the first time. His bone shows that he was in good health. He died at 35," she added.

A CT scan is a type of advanced x-ray, where hundreds of exposures of the body are taken and stitched together using a computer, resulting in a three-dimensional model of the body.

In 1881, about 50 mummies were found in a hiding place in the modern-day city of Luxor called Deir el-Bahari Royal Cache. The mummies were stored here in an effort to protect them from tomb robbers.

According to Saleem, all of the mummies were unwrapped from their linen scrolls by antiquities experts in the presence of the Khedive, Egypt's then ruler, and ambassadors as a way of celebrating them.

"The Mummy of Amenhotep I is the only one that was not unwrapped," she said.

"The mummy is topped with a funerary mask and garlands of colourful flowers like yellow and blue," she added.

The project has already helped solve many unanswered mysteries. One of the main ones is to explore the reburial project conducted by the priests of the 21st Dynasty.

"The priests initiated this project after noticing that many royal tombs were robbed and the mummies were smashed. It was intended to repair the mummies and rebury them, but this time hidden in a safer place," she explains. The safer place was the two royal caches that were later discovered.

However, there is still a great deal of debate around the original mummification of the bodies, before the priests got to them.

Saleem's scanning of Amenhotep I has helped answer some of these debates.

"Several Egyptologists said that the reburial project was a way to rob the old royal mummies of the kings to give their possessions to the following kings of the 21th dynasty, but my scanning reveals the opposite," she says.

"It shows that Amenhotep I mummy was decapitated. Then the priests in their reburial project fixed the head with resin, a glue-like material taken from cedar trees in Lebanon. His foot was smashed so they fixed it above a plank."

The scanning also showed 30 amulets made from different materials, including gold, as well as a belt made from 34 golden beads.

For Saleem, it does not make sense that the amulets and golden belt would still be in the tombs if the priests intended on robbing them. For her, the scanning of the tombs shows that the priests of the 21st dynasty were actually keen to take care of their kings.

Guardian of my civilisation

Saleem's interest in mummies stems from not only her studies, but her desire to contribute to the preservation and protection of her own civilisation.

Saleem specialises in paleo-radiology, which is the imaging of antiquities. She has experience in imaging hundreds of mummies, a journey that started in 2004 for her.

'On my first day in the hospital, they brought an Egyptian mummy for a CT scan. I thought immediately that I can benefit my own civilisation through specialising in this field'

At the time, she was studying radiology at the University of Western Ontario in Canada, where she was surprised by her task on the first day of work.

"On my first day in the hospital, they brought an Egyptian mummy for a CT scan. I thought immediately that I can benefit my own civilisation through specialising in this field," she explained.

"I have the ability to understand my civilisation and be its guardian."

Saleem joined the active paleo-radiology research group at Western University that included different scientific specialities, such as anthropologists and pathologists. Dr Saleem is one of very few radiologists specialising in this field in the world.

"We used to discuss with each other how to understand civilisation, each one according to his experience in his field. We discussed how we can develop our specialties so that it can help us understand more about civilisation and to apply it to antiquities."

All eyes were on Egypt in April 2021 when 22 mummies of ancient Egyptian kings were transferred from the Egyptian Museum in Tahrir in central Cairo to the new National Museum of Egyptian Civilisation in Old Cairo.

The lavish celebration caught attention globally, as the decorated carriages carrying the mummies were designed to resemble the traditional boats used in ancient Egypt when pharaoahs were transported to their tombs.

The spectacle was not only a major milestone in showcasing Egypt's rich heritage to the world, but also showed the technicalities of transporting the historic figures.

Saleem worked alongside a mummy conservation team, and used CT scans of the mummies to provide information on how to solve problems related to the safety of the mummies during the transportation process.

Following a range of tests and scanning, the mummies were declared safe to transport by the conservation team.

Each one of the mummies was placed in an oxygen-free, nitrogen-filled container and carried on a boat-like vehicle equipped with shock-absorbing material to protect it.

The pharaoh's golden parade was a pivotal moment not only in celebrating Egyptian history, but also in identifying key information which was previously unknown.

While scanning the mummies prior to the parade, scans showed further details on how they died.

"Seqenenre was killed in a battle against Hyksos, not in a conspiracy as mentioned before. I know this fact when examining the wounds on his body," she explained.

"The CT scan reveals that his wounds matched with the Hyksos weapons indicating that he got killed in a battle against them."

The Ramses III CT scan revealed that he was killed in a harem conspiracy masterminded by his wife, queen Tiye, to place her 18-year-old son Pentawer on the throne instead of the legal heir, Ramses IV.

"The scan shows that the king had multiple injuries: a fatal cut wound in the neck as well as an amputated left big toe."

Prior to her scanning, the cause of death of Ramses III was not settled.

Facial reconstruction of the pharaohs

In the course of her work on the mummies, Saleem developed an eagerness to know how the pharaoh kings looked when they were alive.

In an effort to explore this further, she started a scientific project to make a facial reconstruction of King Tutankhamun and King Ramses II based on the CT scans of their mummies.

For Ramses II, Saleem teamed up with British anthropologist Dr Caroline Wilkinson at Liverpool John Moores University, who is best known for her work in forensic facial reconstruction. The team built up the king's face digitally using a computer by adding layers of muscles to the skull.

For King Tutankhamun's facial reconstruction, Saleem teamed with Andrew Nelson, professor of anthropology at Western University, and Christian Corbet, a Canadian sculptor. The scientific project was documented by Soura Films for PBS.

"We accomplished the process using the 3D-printed skull based on the CT scans of the mummy. The muscles of the face were added on the skull model using measurements of Egyptian faces.

"Visualising the pharaohs' actual faces during their lives brings us closer to connecting with their human side," says Dr Saleem, who led scientific projects in 2022 that used CT scans to reconstruct the real faces of Egypt's great pharaohs.

Despite making significant strides in the field, Saleem has not slowed down, and is currently working on the interpretation of over 40 CT scans of ancient Egyptian kings and queens.

Most of her time is also spent in the field, conducting x-rays at the Saqqara excavation sites. In the future, Dr Saleem says she wants to continue collaborating with international museums, helping in the study and display of historic mummies.