A world-first recreation of a 4000-year-old garden has been opened in Hamilton on Monday. 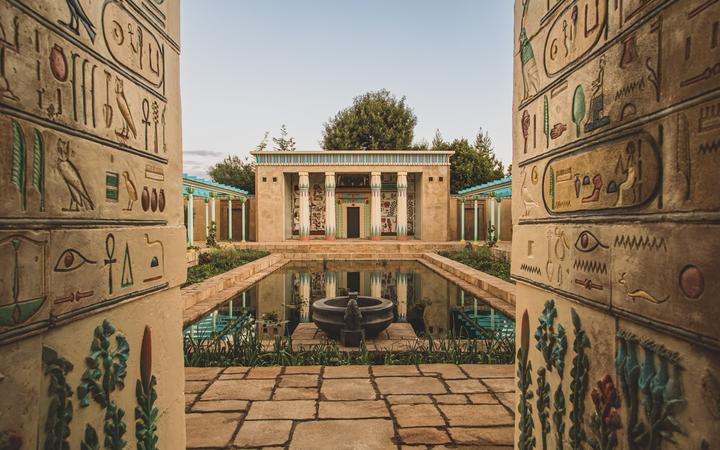 The garden is based on a typical temple from the middle kingdom period 2040 BCE to 1782 BCE. Photo: Supplied / Hamilton City Council

The ancient Egyptian Temple Garden one of 18 themed gardens telling the history of gardening and civilisations over the ages at the Hamilton Gardens.

It was opened by the Egyptian Ambassador to New Zealand, Dina Farouk El Sehy.

The garden is based on a typical temple from the middle kingdom period 2040 BCE to 1782 BCE.

Much is known by archaeologists about ancient Egyptian gardens, but the Hamilton garden is believed to be the first to recreate one.

The experience starts outside the temple at the Palm Court, a court yard that links the Egyptian garden with other themed gardens.

"On the outside is an ancient ruin designed to look exactly like it would if discovered today and then once you go through the entrance into the temple garden it is like stepping through in time."

She said ancient Egyptians would not have been able to go into a temple garden as it was only for royalty and priests.

"The outside of it is all about the power of the Pharaoh and inside it is about wooing the gods."

A typical temple garden had a rectangular pool surrounded by a range of plants.

The garden's operations manager Gus Flower said all of the plants in a temple garden were associated with the rituals around death.

"Preparations for rituals, the tombs, funerals . Fruits crops as well, vegetables and part of that was for their preparation for the journey to the after-life. Everything here is in relation to that."

The plantings have been measured out in cubits, an ancient Egyptian unit of length based on the distance from the elbow to the middle finger.

"The attention to detail is really, really important for us."

Webb said every effort has been made to make the garden as realistic as possible.

"We have also worked with Egyptologists at Auckland University and also Oxford University and the designer of the garden Dr Peter Sergel also headed to Egypt to have a chat to officials as well just to make sure the design was as authentic as possible."

The most striking thing about the temple garden is the vibrant colours used on the walls and the temple columns, which may surprise people.

Ancient tombs which have been opened have faded over thousands of years but research shows very bright colours were used, she said.

Hieroglyphics, a system of pictorial writing on ancient Egyptian monuments, also adorn the entrance way into the temple garden.

The 750-square metre garden is only a fraction of the size the real thing would have been.

"If you look at the pool it would have been ten times bigger in an actual temple garden, but there is research that we have done that shows that up to 20 people would have rowed the King around the pool in a temple garden. So as you can see from this one here, it's too small to be able to get 20 people rowing, you would probably do one stroke and be at the other end."

Work started on the design and then construction of the garden in 2018.

Webb said another 12 themed gardens continuing the timeline of gardening are planned at the Hamilton Gardens, bringing the total to 30.

Work has already started on a Pasifika garden, Medieval garden, and a Baroque garden.

The Egyptian garden is open to the public from Tuesday.