Ancient holder of pharaoh's secret documents found in Saqqara - Al-Monitor: The Pulse of the Middle East

A Polish mission was delighted to stumble upon the chamber of a major dignitary in the vast Saqqara necropolis. 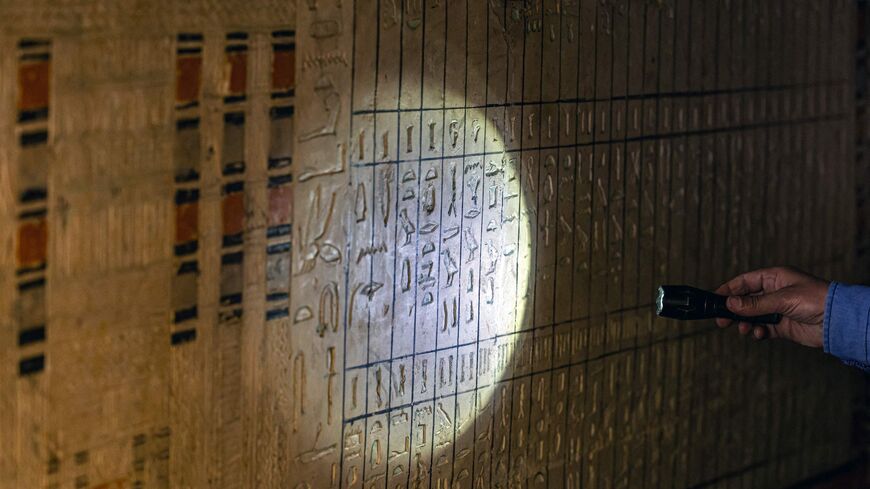 An archaeologist holds a light against a wall covered in hieroglyphic etchings on March 19, 2022, inside the tomb of Beti, one of the five ancient Pharaonic tombs recently discovered at the Saqqara archaeological site, south of the capital Cairo. - KHALED DESOUKI/AFP via Getty Images

After another year of exploring the depths of the Saqqara necropolis, a Polish archaeological mission has announced the discovery of a 4,300-year-old tomb that belonged to an ancient Egyptian officer in charge of secret documents during the reign of the first pharaohs of the Sixth Dynasty, around 2,300 BC.

Archaeologists with the Polish Centre of Mediterranean Archaeology at the University of Warsaw found the tomb by chance last autumn while excavating a mysterious ditch known as the Dry Moat that encircles the step pyramid of King Djoser, the earliest such construction in Egypt. The team was working near its previous discovery, the tomb of an ancient vizier named Merefnebef, when the facade of the other's tomb was suddenly unearthed.

Kamil Omar Kuraszkiewicz, the director of the expedition, told Al-Monitor that the discovery "is not in the immediate vicinity of the tomb of Merefnebef — in fact, there are over 40 meters [130 feet] between them — but in the so-called Dry Moat of the step pyramid complex, a fascinating structure that has been recently the focus of our research."

Kuraszkiewicz added, "Exploring a section of the Dry Moat, we were searching for structures from the times of Djoser."

The facade of the burial chamber is decorated with reliefs depicting the tomb's owner: a dignitary named Mehtjetju. The mission found inscriptions reading that Mehtjetju was an official with access to secret royal documents as well as an inspector of the royal estate and a priest of the mortuary cult of King Teti.

Mehtjetju most likely lived at some point during the reigns of the first three rulers of the Sixth Dynasty: Teti, Userkare and Pepy I. Kuraszkiewicz noted that very little is known about the roles of these officials because few documents have survived, but he explained that everything that the pharaoh wrote or dictated was considered a decree and important ones were sealed. Mehtjetju was described as "privy to the secrets of the sealed royal documents."

"We don't know what exactly were his duties, as these have been not described anywhere. But the title itself suggests that he might have been involved in administrative processes that resulted in issuing the most important decrees. As for the contents of the decrees, it could be anything from tax exemptions through land endowments," Kuraszkiewicz said.

The reliefs on the facade of the tomb, executed by an exceptionally skilled hand, suggest that Mehtjetju enjoyed a privileged social position that allowed him to hire skilled artisans, the mission stated. The rock into which the chapel was carved, however, is very brittle and eroded and required help from conservators from Warsaw's National Museum when it was found.

"The relief is of exceptional quality, but this is not easy to see because of the quality of rock in which it is carved; the surface is eroded. But when you see behind the erosion, the finesse is striking," explained Kuraszkiewicz, who called it "surprising to find this quality of workmanship in the tomb of a middle-ranked official, because in the majority of tombs in the same cemetery, with the exception of Merefnebef, the artists were obviously less skilled and their work more schematic, often even clumsy."

The archaeologists note that the decoration of the chapel is incomplete, with no paint on the facade or reliefs on the side walls. On the side walls the Polish mission found figures painted in black ink on lime plaster, guides for carvings to come. The sketches depict sacrificial animals such as cows and oryxes.

The team does not believe that the incomplete decoration of the chamber means that Mehtjetju was not buried inside, as in that case, it is most likely that someone else would have taken over the place. The archaeologists do feel it could be linked to a sudden death and quick burial in the hastily finished tomb.

"It is very tempting to associate the death of Mehtjetju with the nature of his job," Kuraszkiewicz said. "However, there are also other possibilities. It has to be remembered that building or hewing a tomb was a time-consuming process and it happened quite often that dignitaries died before their tombs were completed," he added.

"Moreover, [that] was a period of significant reforms in the Egyptian administration that resulted in many officials being dismissed. When this happened, poor guys most probably could not continue to pay for their tombs," Kuraszkiewicz noted.

The discovery has added to the recent excitement in the world of archaeology over Saqqara, the oldest and most prestigious part of the necropolis of the ancient city of Memphis, one of the most important metropolises of Egypt for three millennia.

"Saqqara is a very big site and it contains many cemeteries dated to the Fifth and Sixth Dynasties, and the discovery of this tomb will enrich our knowledge about the officials of this period and their role on maintaining the cult of the kings," famed archaeologist and former Egyptian Minister of Antiquities Zahi Hawass told Al-Monitor.

One of the most intriguing sites in Saqqara is the majestic funerary complex of Djoser. The surroundings of the royal tomb must have initially been considered a sacred space, but over the centuries the area between the western wall of the complex and the edge of the Dry Moat became a vast cemetery.

"In the next season we will continue exploring the tomb of Mehtjetju, inside of the chapel and possibly also the burial chamber," Kuraszkiewicz said. "The chapel may be decorated with reliefs or paintings and inscriptions, of course, that may tell more about the activity of Mehtjetju. But it's equally possible that the decoration was not even started," he noted.

"The burial chamber may contain the body of the official. If that is the case, we will be able to know much more about his life and his burial equipment. But considering how skilled and diligent were ancient Egyptian tomb robbers, it may be completely or almost completely empty," Kuraszkiewicz added. "I suppose that only ancient gods know the answers at the moment. We hope to know them in September," he concluded.