Scientists in a company working on DNA technology reconstructed the faces of three men who lived in ancient Egypt 2,000 years ago, but Egyptian Egyptologists raise cautions about the significance of the feat.
@HagarHosny 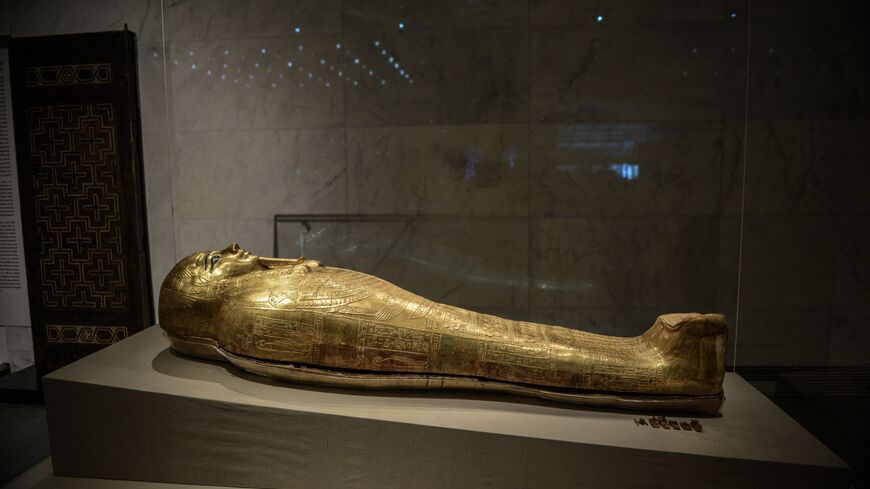 CAIRO — The American Live Science website reported Sept. 27 that a team of scientists have successfully recreated the faces of three men who lived in ancient Egypt more than 2,000 years ago, in what was described as a "stunning" operation.

The website said that researchers at Parabon NanoLabs, a DNA technology company based in Reston, Virginia, were behind the reconstruction process. "Digital reconstructions depict the men at age 25, based on DNA data extracted from their mummified remains," the website added.

The three mummies were found in Abusir el-Meleq, an ancient Egyptian city located on a flood plain south of Cairo. They were buried between 1380 BC and 425 AD.

The researchers at Parabon NanoLabs relied on genetic data deduced by Max Planck Institute for the Science of Human History in Tübingen, Germany, to create 3D models of the mummies' faces through a process called forensic DNA phenotyping (also known as Snapshot). The process uses genetic analysis to predict the shape of facial features and other aspects of a person's physical appearance.

"Passion for Egyptology is the reason behind experiments of this kind," Hussein Abdel Baseer, director of the Antiquities Museum at Bibliotheca Alexandrina, told Al-Monitor, pointing out that the people behind this experiment are not Egyptologists, but rather researchers in genetics.

Abdel Baseer praised these experiments, but argued that their results are subject to interpretation. "Different scientists have predicted the features of King Tutankhamun's face years ago, but their findings were not a match," he said.

"In general, these are good and positive attempts that show the West's infatuation with Ancient Egypt and mummies in particular. From a scientific point of view, these experiments are an attempt to explore Egyptian civilization. This brings Egypt to [global] research and media attention."

Parabon NanoLabs said in a statement posted on its official website Sept. 1, "The company believes this is the first time comprehensive DNA phenotyping has been performed on human DNA of this age."

The company noted that the three men's "complexions were predicted to be light brown, with dark eyes and hair and no freckles." It added, "Their ancestry was determined to be more similar to modern Mediterranean and Middle Eastern individuals than to modern Egyptians."

However, "working with ancient human DNA can be challenging for two reasons," Ellen Greytak, director of bioinformatics at Parabon, told Live Science. "The DNA is often highly degraded, and it's usually mixed with bacterial DNA."

Bassam al-Shammaa, a researcher in Egyptology, told Al-Monitor, "Experiments of this kind may be considered a violation of the sanctity of the bodies of the dead. It is something that these people did not want before their death. They had built their tombs in unknown areas so that no one would find them."

Constantly changing technology, he said, means that "another technology may be developed in the near future that will produce completely different results from the current ones. This is in addition to the difficulty of dealing with DNA in mummies, as the report mentioned."

In light of those difficulties, he asked, "What is the point of these experiments if their results are uncertain and are always fraught with doubt? The features of the Egyptians at the present time are no longer very similar to the features of the ancient Egyptians, … due to migrations into Egypt."

For instance, Shammaa continued, "Drawings on the walls of one of the tombs in the Giza area near the pyramids show the figure of a blond-haired woman, which contradicts the prevailing features of the Egyptians at the time. The new results should not be generalized, especially since the experiment was done on three mummies only."

Although the experiments were done with due diligence, he concluded, "their results could be questioned."