Why Were Two Egyptian Mummies Buried With Gold Tongues? | HowStuffWorks

Why Were Two Egyptian Mummies Buried With Gold Tongues? 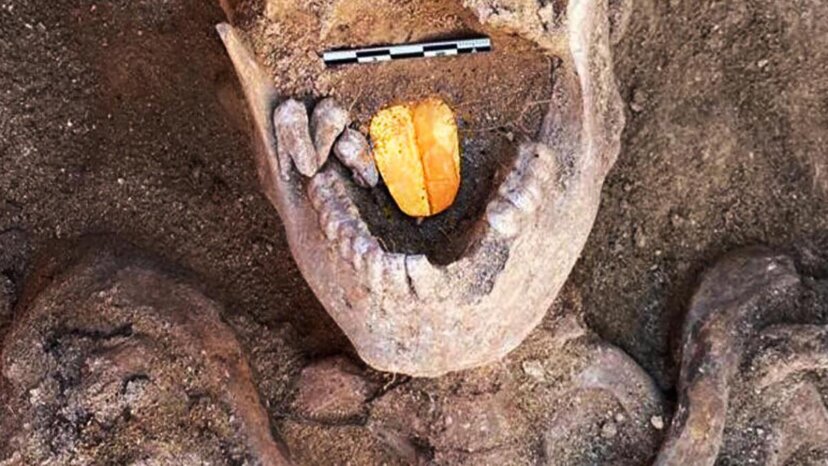 One of two golden-tongued mummies discovered in the temple of Taposiris Magna, currently being excavated by archaeologists outside Alexandria, Egypt. Egyptian Ministry of Tourism and Antiquities

There are probably some really boring things about digging up ancient dead bodies, but the reward probably comes in when you find the weird thing — the mysterious thing. Like mummies with golden tongues, for instance.

The Ancient Egyptians were a treasure trove of unusual funerary practices — for at least half of the 6,000-or-so years they buried their VIPs, it's obvious they were perfecting the process of preserving the soft tissues of their physical bodies, as well as streamlining the travel necessities for the deceased's journey to the afterlife. As their culture grew, so did the stories around the paces the dead would be put through in the Great Beyond.

The process of mummifying somebody was long — it took a bunch of specially trained priests with detailed knowledge of human anatomy around 70 days to complete. It was also expensive, which is why it's the wealthy and royal ancient Egyptian people archaeologists find mummified in sarcophagi, tucked in among treasures and mummified cats and sometimes servants to take care of them in the afterlife, occasionally with their tongues covered in gold foil.

In a statement made by the Egyptian Ministry of Tourism and Antiquities in January 2021, two of the 16 mummies discovered in the temple of Taposiris Magna, currently being excavated by archaeologists outside Alexandria, were found with gold foil tongues stuck in their mouths. The Ministry statement explained this would have been done by the priest who prepared the bodies "to ensure their ability to speak in the afterlife" — particularly to Osiris, the Egyptian god of the dead.

Gold was as precious in ancient Egypt as it is today, and golden tongues have been found in Egyptian mummies before, but it is not known why some of the mummies got these precious prosthetics while others did not. However, the practice is mentioned in the Book of the Dead, the ancient Egyptian text outlining funerary practices. The text explains that placing gold foil on the tongue would ensure the deceased would be able to breathe, eat and speak in the afterlife.

The mummies found at Taposiris Magna were not in particularly good shape, but they were buried with some other treasure, including coins depicting the face of Cleopatra, which means they were entombed around 2,000 years ago, during the Ptolemaic Kingdom of Egypt. The team that uncovered the 16 burials at Taposiris Magna has been working for years to find the tomb of Cleopatra, the last ruler of the last dynasty of ancient Egypt, which is believed by some to be submerged under the harbor in Alexandria.