Parade will take place with great fanfare, before settling in new home at Fustat 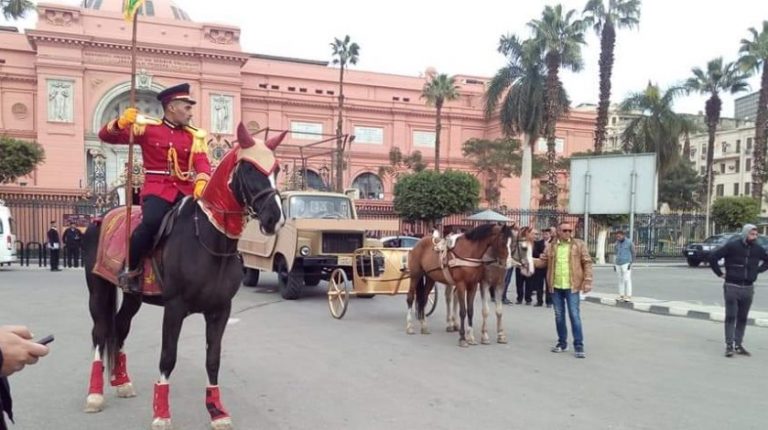 Egypt's Ministry of Tourism and Antiquities has announced that the highly anticipated parade of mummies for Ancient Egyptian kings will take place in Cairo on 3 April.

On the day, 22 royal mummies will be transferred in a magnificent parade from their current home in the Egyptian Museum in Cairo's Tahrir Square, to their new permanent display in Fustat's National Museum of Egyptian Civilization.

The royal mummies that will be put on display at the new museum belong to the 17th, 18th, 19th and 20th Dynasties, and include 18 mummies of pharaohs, and four of queens.

The scene will begin when the doors of the Egyptian Museum in Tahrir Square are opened at night, to allow the 22 mummies to come out for the last time.

The mummies will be transferred in specially constructed cars for the procession, bearing a logo and the name of the royal mummy present in the car in Arabic, English, as well as hieroglyphs.

War chariots, also specially made for the occasion, and will be present on both sides of the road during the parade, along with horses.

Before the start of the parade, a 21 gun salute will take place in honour of the ancient rulers, and to signal the exit of the cars, one after the other, from the main museum gate. These will move in a circular shape in Tahrir Square itself, and revolve around the obelisk that now lies at the centre of the square.

At the same time, the obelisk and the buildings around it will be lit up for the occasion, before seeing the procession run along the banks of the River Nile. The procession path includes eight points, the most important of which are Tahrir Square and the Ain Sira Lake. The ceremony and parade will be broadcast, with TV screens set to be placed in the streets.

The procession will feature military music, with an impressive artistic performance to be displayed in celebration of the royal exit from the museum. A number of actors will participate in the ceremony, talking from different tourism destinations, including Sawsan Badr, Hussein Fahmy, Mona Zaki, and others.

Speaking in an interview with local media, Minister of Tourism and Antiquities Khaled El-Anani said the procession of royal mummies will take approximately 40 minutes. The whole ceremony, however, will last for 90 minutes, as there are set to be activities before and after the procession.

"We want the world to see the beauty of Egypt's civilisation, with the procession set to be dazzling, different from any other celebration, and among the most beautiful celebrations that the people of the world will see," according to El-Anani, "Everything will start in the dark, then one building after another will be lit, and the lights of Tahrir Square, the lake, and the choir will be singing in the Ancient Egyptian language."

The minister called on those interested in watching the procession to do so from the comfort of their homes, due to the novel coronavirus (COVID-19) pandemic.

The mummies will reach their permanent display in the National Museum of Egyptian Civilization at the end of the parade, to settle inside a dedicated hall called the Royal Mummies Gallery.

Ahmed Ghoneim, head of the National Museum of Civilization, said in an interview with local media, that each mummy will be placed in a nitrogen capsule for the sake of its safety.

The ancient remains will not be displayed in the museum until two weeks after their arrival, with Ghoneim saying that the Royal Mummies Gallery is set out in such a way to make visitors feel that it is similar to a "tomb".

There will be a set of X-rays also present, each telling the story of the kings and queens present in the gallery.

He pointed out that the museum will open on 3 April, to receive the public from 4 April, with the mummies on display after two weeks. Ghoneim noted that the transfer of the mummies will be a festival and celebration in which many authorities, bodies and ministries are set to participate.

Talking to Daily News Egypt, the world renowned Egyptologist and former Minister of Antiquities Zahi Hawass said that the transportation of the mummies is very important for the museum.

He noted that, if the National Museum of Egyptian Civilization were to be opened without a starring exhibit, then few visitors would bother to pay the museum attention.