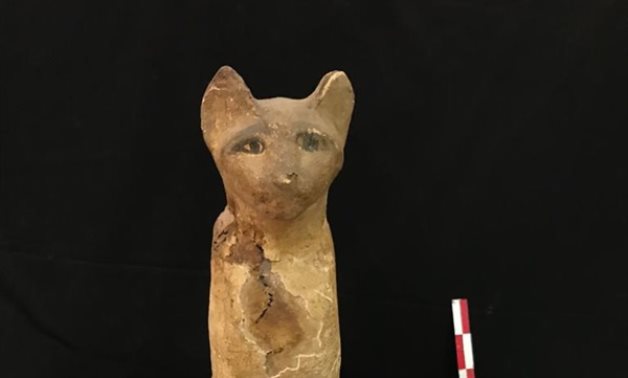 CAIRO – 18 March 2021: CEO of the National Museum of Egyptian Civilization Ahmed Ghoneim announced the receipt of six important artifacts from the recent archaeological discoveries of the Ministry of Tourism and Antiquities' excavations in the Saqqara Cemetery

Ghoneim explained that an archaeological committee has been formed from the museum to complete the collection process.

This comes within the framework of the great role played by the museum to preserve the archaeological heritage of Egypt through recording and documenting the artifacts and providing a suitable environment that protects them against the dangers of damage, theft and looting. This is in addition to studying and examining the artifacts with modern technological methods; sterilizing them against bacteria, fungi and insects with Anoxia devices; and determining the age of the artifacts through a carbon 14 device, which the museum supplies. One of the artifacts transferred to NMEC - Min of Tourism & Antiquities

The CEO added that among these artifacts that were transferred to the Museum of Egyptian Civilization is an important and rare statue of the ibis, the symbol of the God of Wisdom and Science in ancient Egypt (Thoth) made of wax, which is one of the rare materials that the ancient Egyptian used in a manner that preserves its cohesion to withstand a temperature of more than 40 degrees Celsius.

Also, three large statues of a cat, which was a symbol of the Goddess Bastet, were transported from the Saqqara cemetery in the area where the statues were discovered, which is called the Temple of Boubasatin. It dates back to the late Pharaonic era. That is in addition to receiving two statues of Ptah, Sokar and Osiris, which represents the following gods united together: Ptah, the main god of the city of Memphis; Sokar, the god of the necropolis of Saqqara; and Osiris, the god of the dead and judge of the afterlife, and the hero of one of the oldest, most famous ancient Egyptian myths, which expresses the value of loyalty, redemption and sacrifice, the myth of "Isis and Osiris". It is worth noting that the museum is preparing to receive 22 royal mummies from the Egyptian Museum in Tahrir in a huge international procession, in addition to the opening of two halls, the Central Exhibition Hall and the Royal Mummies Hall.