Republished: Women of Ancient Egypt: 'Like no others in the world' - Inspiring Women - Folk - Ahram Online

Republished: Women of Ancient Egypt: 'Like no others in the world' 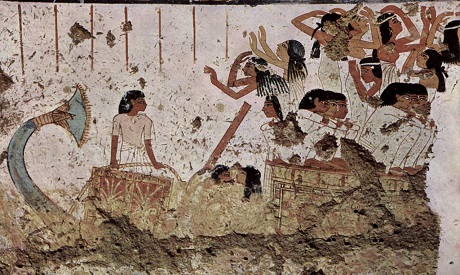 In celebration of the many achievements of Egyptian and Arab women over the years, Ahram Online republishes this article as part of a nine-day special series of gratitude and pride for women's achievements — from 8 March, which is International Women's day, to 16 March, which is Egyptian Women's Day.

The series aims to refresh the collective memory of our nation of the many, and often forgotten, women who excelled against all odds.
While Egyptian women in the 21st century are still lobbying for basic human rights, these republished stories serve as a reminder to society that Egyptian and Arab women fought for and enjoyed similar rights as men across many decades.
From the first woman doctor in the world, to the first woman to fly in Egypt and the Middle East, these women's stories are interweaved, and all deserve to be shared with a younger generation that needs to learn the truth about the accomplishments of their grandmothers and great grandmothers.At the premises of Cairo Library, the hall was crowded with ancient Egyptian women — those who reigned, those who worked, and those who became the first doctors in history.
----------

"Women of Ancient Egypt" was part of a series of lectures given by the talented tour guide, Egyptologist, and researcher in the science of museums and heritage management, Maissa Mustafa.

"The idea was born after the 25 January Revolution, where Amr El-Shoubashy wanted to create a documentary on Egyptian women and asked me to research women in Ancient Egypt. Unfortunately, the film was never created, but the idea grew with me and in 2014 I started my first lecture on women in Ancient Egypt," recalled Mustafa.

"Ancient Egypt believed equality between men and women came naturally, because belief came from studying nature, and geographically speaking, the Nile floods the land with prosperity, hence the god was a good god. And so whatever god created is holy and has a specific role in nature, and hence the equality between men and women in the same species," Mustafa explained to Ahram Online.

Ancient Egypt believed a woman was the goddess of creation, since the first dynasty; she was also a queen, a guardian to the throne, like queen Meri-net in the first dynasty, Sobik-net, Hatshepsut, and Queen Eiah Hotep, whose name is still sung in folk songs related to the moon and festivity, always in the holy month of Ramadan: Wahawi ya Wahawi, Eiaha."

Eiah Hotep was a queen whose husband and son were martyred and she led the country while her other son, King Ahmous was fighting the Hyksous. In praise of her courage and wisdom, her son, the victor, granted her the medal of courage and engraved her a mural at Al-Karnak Temple. Famous quotes documenting her merits were as follows:

"Praise the lady of Egyptians, known in all foreign countries, the one who plans for people, the wife of a king, the daughter of a king and the mother of a king, the noble, the one with deep knowledge who guards Egyptians, the one who reunited the army, under her sovereignty, who brought back the immigrants, caught those who ran away, calmed the south, its revolutionaries, eternity is hers," Queen Eiah Hoteb, mother of Ahmous.

The first woman doctor in history, judge, and businesswomen

Beiset is the first woman doctor in history; she was the head of doctors specialised in gynecology, as written in the medical school of Sais, in the Western Delta, 2,400BC.

On a parallel note, during the reign of King Pipi, Lady Merit was a judge, a minister and was named the king's "right hand."

The era of the Middle Kingdom, meanwhile, witnessed Lady Tshat, the head of the stamps department. "Emiret Khetmet," and from it the word khetm (stamp in Arabic), found its way to the Arabic language. As for Lady Ninfer, she was a businesswoman who owned the import and export trade during the reign of Tuhotmus III, 1,500BC.

Women priests and artists were also prevalent in Ancient Egypt. There were certain posts in the temple dedicated to women: the purifiers, the music players, the dancers, the supervisors and the highest priest.

"Women in Ancient Egypt had a great freedom to express their love, could choose their own husbands, and had the equal right to divorce," explained Mustafa, while reciting an extract of a love poem written by a woman, from The Words that Brings Joy to the Heart, the book by Hassan Saber.  "He does not realise my yearning to hug him, come to me so I see your beauty, my father and mother will be happy to meet you …"

In the Torino papyrus, the marriage contract explains that in case of a divorce the wife gets a "list" of all the things she bought in the house, and one third of their wealth, since they were married. Their children get to inherit everything equally. Another interesting example is the marriage contract found in Deir Al-Madina:

"By the grace of Amun, and the king, if I ever thought of excluding or humiliating your daughter, I deserve to be hit 100 times, and I would give her willingly all of my belongings and money that we've earnt together."

"The unique", "the loved," "the one who is like no other," "the most beautiful in the world" — titles that are indeed worthy of the Egyptian women, ancient and modern.

*This article was first published on November 18, 2017