The earliest stars were different than the ones we see in the sky today. That's what makes them so hard to find. 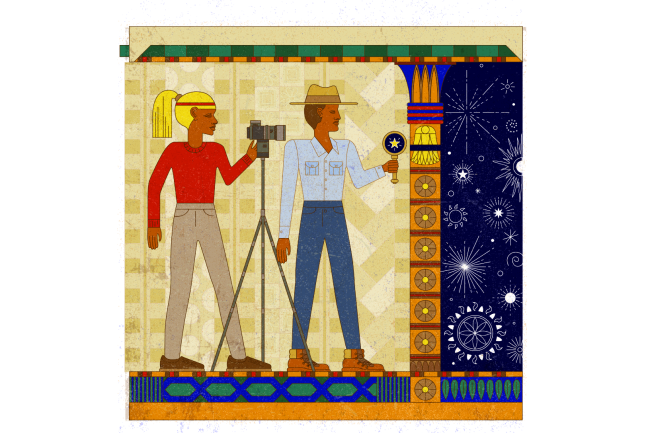 This article appeared in the March/April 2021 issue of Discover magazine as "Seeking Lost Light." For more stories like this, become a subscriber.

I never wanted to be an astrophysicist. While a lot of my colleagues were looking through amateur telescopes, I was dreaming of decoding hieroglyphics and brushing off hidden artifacts in newly discovered Ancient Egyptian tombs.

As is the case with most young Egyptophiles, for me there was one story that captured the excitement of Ancient Egyptian discoveries more than any other: the discovery of the tomb of Tutankhamun. In November 1922, British archaeologist Howard Carter held up a candle and peered through a small drill hole in the tomb door. His patron, Lord Carnarvon, asked him if he could see anything, to which Carter, struck dumb with amazement, could only reply, "Yes, wonderful things, wonderful things!" He recounted later that, in the dim candlelight, "details of the room emerged slowly from the mist ... strange animals, statues and gold — everywhere, the glint of gold."

The unveiling of Tutankhamun's final resting place was exceptional because of how rare an occurrence it was. Most times when a tomb was "discovered," grave robbers had found it first, sometimes thousands of years before. Ancient Egyptians realized pretty quickly that if you mark the spot where you buried the treasure with a gigantic pyramid, the treasure would not remain buried for long. They began to secrete their kings, queens and the accompanying treasure underground, but even that wasn't enough to keep their treasures safe, making Tutankhamun a rare exception.

It might seem strange, but the search for ancient tombs is comparable to our search for the first stars. The universe has changed so much since those first stars were laid to rest. The pristine environments in which they formed were raided, polluted by interloping young stars and their messy supernovae, leaving little scope for undiscovered stellar tombs.

Population III stars, as these first stars are known, were ancient beasts of mammoth proportion, up to several hundred times the mass of our sun. They lived fast, with lifetimes of only a few million years compared to the 10-billion-year lifetimes of less massive stars such as our sun. The same diversity of lifetimes in anthropology would be equivalent to finding an early humanoid species that aged and died only three days after birth. And yet, in such short lifetimes, those stars are the ones most responsible for changing the universe. As they roared to life, they illuminated the universe, irradiating it and seeding it with metals that could then form stars, planets and us.

To date, astronomers still haven't located a Population III star. So, where are they? The limitations of our tools, as well as pollution in the galaxy, has made the search for these ancient artifacts difficult. But some promising finds have been made in recent years — pointing us to the descendants of Population III stars, and one day, hopefully, to the origins themselves.

Metal in the Sky

The search shouldn't be so hard. After all, the glint of starlight is hard to miss and we certainly aren't short of places to search in the Milky Way. The prevalence of stars presents a problem, though, and searching for a Population III star among billions in the Milky Way is like searching for genuine Ancient Egyptian artifacts at a jumble sale in Texas. You might get lucky — but you'll probably end up walking away dejected, wearing a battered, second-hand cowboy hat.

To the human eye, a star born 13 billion years ago looks much the same as a star of similar mass born 4 billion years ago. But for astrophysicists, it's important to determine a star's metal content, since the first stars were free of metal. We assess the metal content by measuring what fraction of the star comprises a particular metal based on the strength of the metal absorption lines in the spectrum and comparing that fraction to the same quantity in the sun. An iron-poor star is composed of a lower fraction of iron than the sun, even if the star is very large and has a larger amount of iron in terms of mass or atoms. 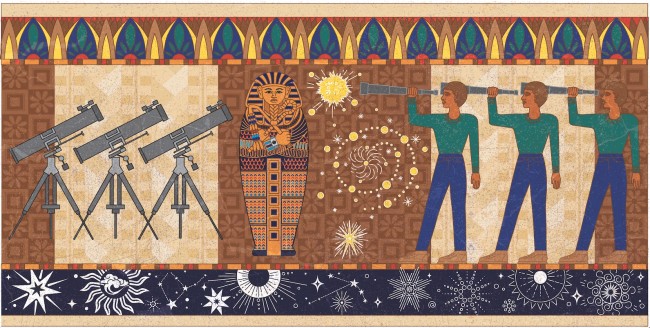 There are lots of metals to choose from, but iron produces strong absorption lines, which are most easily measured by optical telescopes, and it turns out that iron is a good indicator of overall metallicity, too. Generally, if a star comprises a smaller fraction, or abundance, of iron than the sun, then we call it metal-poor, and anything with a larger fraction of iron is called metal-rich.

The stars we see around us are metal-rich because they formed from gas already seeded with metals by previous supernovae. Stars forming today typically have an overall metal content of about 2 percent by mass; only 2 percent, yet we call them metal-rich! It's worth remembering that hydrogen will always be the main dish in a star, by far. The difference between a Population III star and a star today is merely garnish, yet it makes all the difference.

As we search for older and older generations of stars, the already low metal content decreases until we are dealing with extremely low metal fractions that require accompanying superlative labels. In fact, stellar archaeologists rarely get out of bed for any star unless it has less than 1/10,000th the iron fraction of the sun: ultra-metal-poor stars.

A Hint of Iron

As of mid-2020, only a handful of stars have been observed with an iron abundance below 1/10,000th. Technical limitations with a telescope or interference from other stars introduce convincing forgeries into our spectral lines, and the analysis carried out by stellar archaeologists to understand and remove this contamination is vital work.

The current record holder for the most iron-poor star where an iron measurement has been made is SMSS J1605-1443. Discovered in 2018, this mega metal-poor halo star has less than 1/1,000,000th the solar iron fraction. This is exceedingly low, so is this our Population III star? Unfortunately, no, the levels of other heavy metals present in the spectrum are too high for this star to have created them all by itself — it has to have had help from a previous supernova seeding the cloud it is made from with a starter kit of those metals. It's the equivalent of faking an Egyptian mummy almost perfectly, but leaving a smartwatch on its wrist.

The levels of iron detected in SMSS J1605-1443 were low, but they were definitely there. However, there is one star where no iron has been detected at all and only an upper limit could be placed: SM0313-6708, observed in 2012. High-resolution spectroscopy of SM0313-6708 in 2013 revealed ... nothing much at all. Instead of a forest of absorption lines, this star revealed almost no activity and the presence of only four metals: lithium, carbon, magnesium and calcium. Everywhere we should have seen a dip relating to the presence of iron, there was just a fat line, indicating an absence of iron. With our technology, we cannot be absolutely certain that there isn't a tiny dip hiding among the general noise of the signal. But we are sure that we are looking at a star at least 1/10,000,000th more iron-poor than the sun — and it could be far lower. 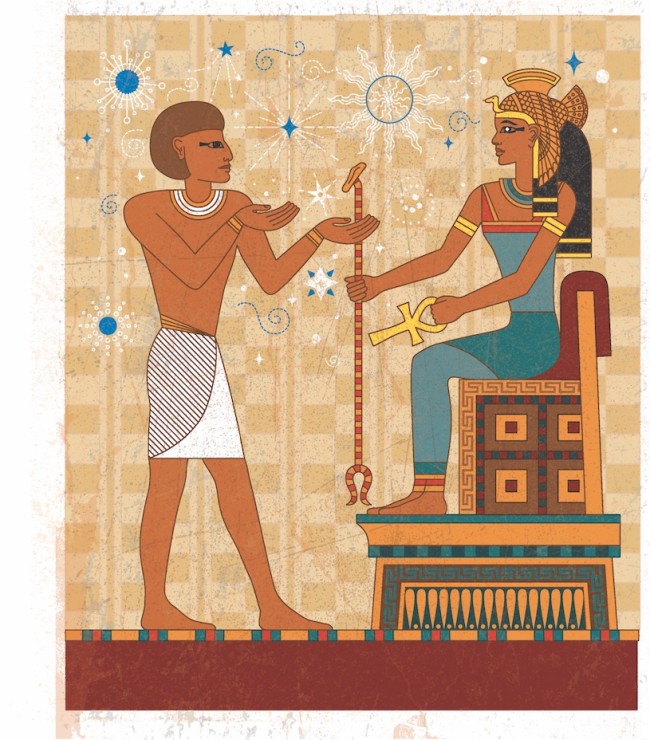 This sounds pretty promising. We found a star that appears to have a total absence of iron, so surely this is our Population III star? Well, unfortunately, it's another no. Only four metal elements may have been detected, but still the abundances found were large enough that they couldn't have been produced purely by nuclear fusion within a first star. However, it's agonizingly close. The metal levels detected in SM0313-6708 are so low that models show that it could have formed from a cloud enriched by just a single supernova. So, what we are looking at here is not a Population III star, but could well be a first descendent. Yet not all hope is lost.

There is real hope that we will one day dig up a surviving Population III star. While the average Population III star is thought to have been tens to hundreds of times the mass of the sun, simulations show that a tail of low-mass stars was produced at the same time. The more massive a star, the shorter its life, so only stars 80 percent of the mass of the sun or less would still be around today. Spotting them isn't easy, but we think that the halo of the galaxy is a good place to look for them, because there is less contamination there by younger stars, and the older Population III stars will probably have meandered out of the disk and into the halo by now.

The progress in stellar archaeology has been significant: Scientists have dug down to metallicities of 1/1,000,000th of the sun's iron abundance, getting to the point where they are not detecting iron at all. As we develop more efficient technology to pick out the most promising candidate stars among the billions of options, the hope is that we will increase our sample size of metal-poor stars and draw more robust conclusions about the diversity of supernovae events that created them.

But no matter how hard we search for some artifacts, we just cannot hope to find much more. Thousands of years of wear and tear destroy most fabrics, food and wooden tools. If a population of low-mass stars exists today, it is likely to be polluted, hidden from view, and there is an open question about whether we can ever circumvent that further than we already have.

We may not have detected that very first star, the metal-free star, but we have detected what we think is the first descendent, the star that bridged the populations of metal-free and metal-poor stars. This is not a failure. While we would all love to meet Khufu and ask him how the Great Pyramid was built and where the treasures are buried, I'm sure we'd all settle for a chat with Cleopatra — though, saying that, one of my favorite facts about Ancient Egypt is that we are closer in time to Cleopatra than Cleopatra was to the pyramids. The future of stellar archaeology is far from over. It has just found its feet, and with the discovery of SM0313-6708, as we hold our candle up to the skies, we have seen the smallest glint of gold — or should I say iron?

Emma Chapman is an award-winning Royal Society Research Fellow in astrophysics, based at Imperial College London. She searches for the signals from the first stars using the largest radio telescopes in the world.