The painters who decorated Egyptian tombs and temples followed rigid guidelines for centuries—until a style revolution changed the rules. 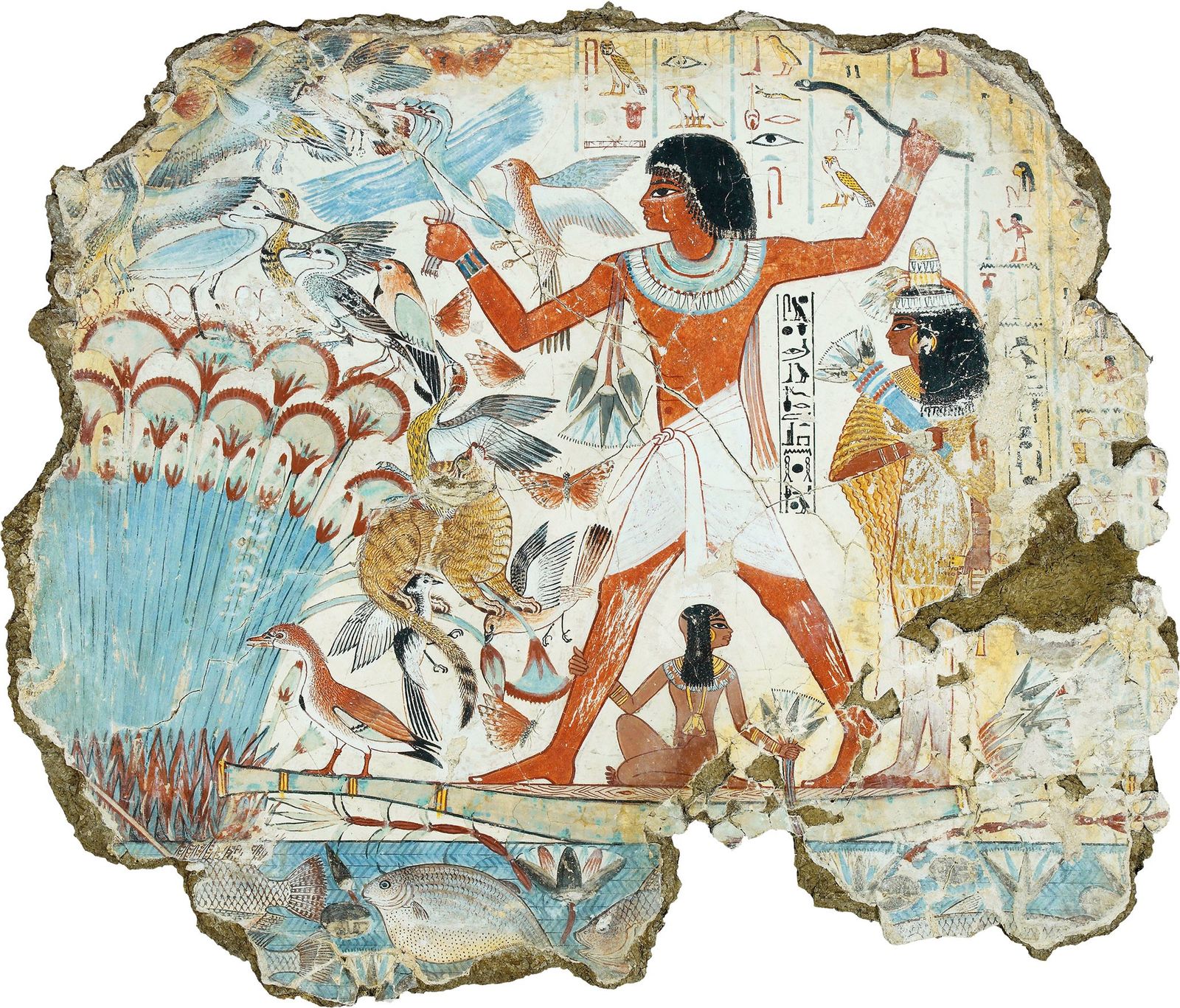 Hunting in the afterlife, a scene depicted on a wall painting from the Theban tomb of the 18th-dynasty high official Nebamun, who lived around 1350 B.C.
Photograph by British Museum/SCALA, Florence

Painters in the Western tradition strive for "originality," stamping a style on their work to ensure their name will be remembered forever. The painters of ancient Egypt could not have been more different: Creators of some of the world's most iconic art, they worked anonymously, continuing a style whose precepts were laid down at the dawn of Egyptian culture in the third millennium B.C.

From its distant origins to the peak of its splendour in the grand tombs of the Valley of the Kings and Queens, Egyptian painting was not created to please a public, but for more transcendent needs. The ka, the vital essence of the deceased, needed nourishment in order to survive in the afterlife. To supply it, Egyptians looked to the magic (heka) of painting. By representing an object, they believed they could make it a reality, which is why growing wheat, hunting, and fishing were popular subjects. 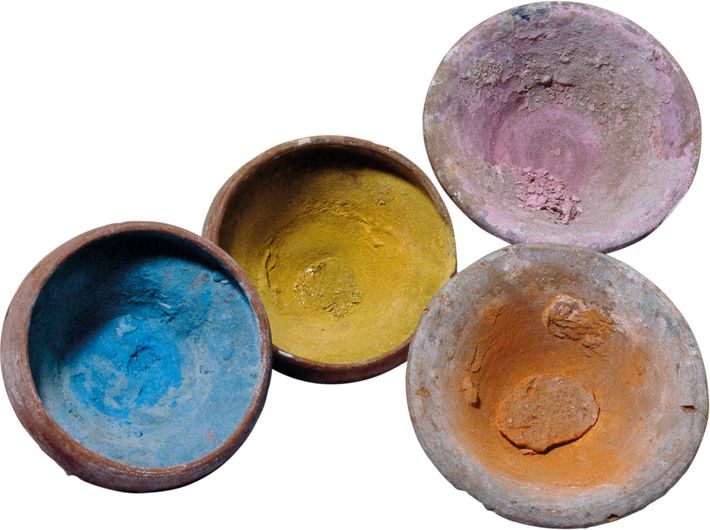 This idea of art having a function beyond aesthetic pleasure is alien to classical and modern notions of painting. The Egyptian painter was striving to capture a subject not in one moment of happiness or sadness, but for all time, a nameless undertaking, carried out in praise of the cosmic order. (These are the sacred and secret rituals in the Book of the Dead.)

Historians know from hieroglyphics that these anonymous artists were called sesh qedut, roughly translated as "scribes of outlines." The office was hereditary, handed down from father to son. Apprentices learned by making copies of earlier works on walls or on ostraca (pieces of stone or sherds). They would sketch out the draft in red, and the master would correct in black.

The application of their skills included the decoration of statues or coffins, as well as more mundane pieces such as furniture and stelae. The most highly regarded task for these craftsmen, however, was decorating temples and tombs. The same themes—life along the Nile, scenes from the afterlife, the pharaoh dispensing justice—recur for centuries, in the same distinctively flat and two-dimensional style. Colours are uniform, and forms are organised in bands similar in appearance to a modern comic strip.

Animals and plants are often depicted with vivid naturalism, while people are usually rendered in a flat, two-dimensional style. The body and head are almost always shown in profile while the eyes and shoulders face forward. 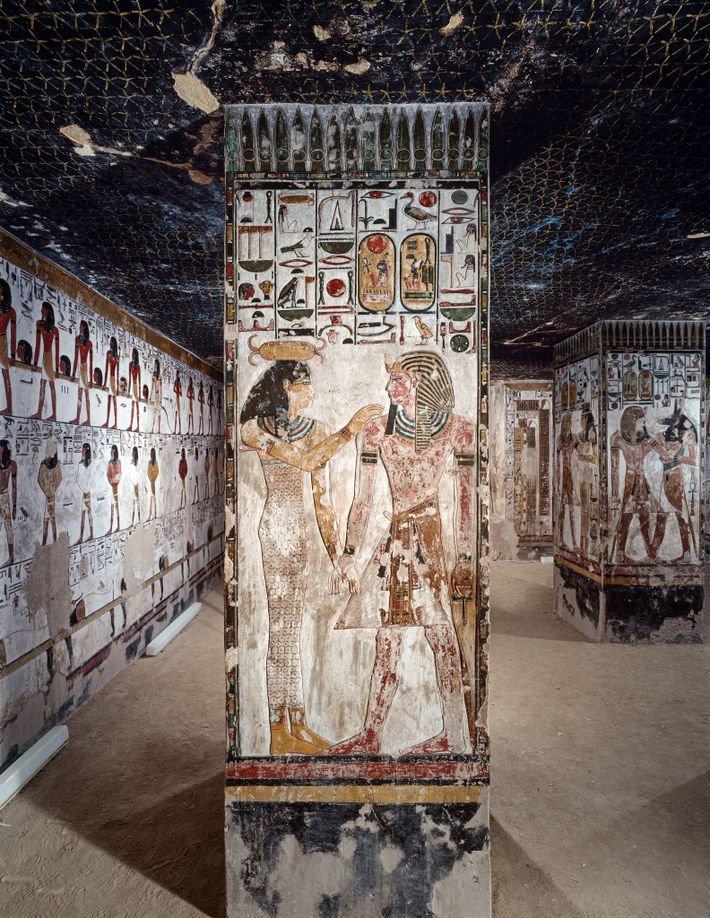 Located in the Valley of the Kings, the tomb art of the 19th-dynasty pharaoh Seti I demonstrates the degree of perfection achieved by painters in Egypt during this dynasty. On the pillar, Neith, a very ancient goddess of war, is depicted standing beside the pharaoh.
Photograph by ARALDO DE LUCA

This distinctive style is ancient. It was first codified in the Old Kingdom (2575-2150 B.C.) and endured through the Middle Kingdom (1975-1640 B.C.) and New Kingdom (1539-1075 B.C.) with little disruption. Painters continued to utilize it until the Roman annexation of Egypt in 30 B.C. The style is intertwined with Egyptian ideas of cosmic order, and the needs of the eternal soul after death. Its origin story begins with the birth of pharaonic culture itself.

Distinctive red figures on a yellow background adorn Tomb 100 at the site of the ancient royal city of Hierakonpolis. Painted around 3400 B.C., these hunting and battle scenes are the earliest known tomb paintings in Egypt. Some 200 years later, Egypt was united for the first time under King Narmer. Following his reign, Egypt's 1st dynasty was established, and soon after an emergence of the new artistic style.

Working together, a husband and wife harvest grain in the fields of the afterlife in a mural from the Artisan Sennedjem's tomb, which dates to the 19th dynasty (1292-1190 B.C.).
Photograph by ARALDO DE LUCA

Although the themes in Tomb 100—a king subjugating people, animals, a procession of boats—would dominate painting for centuries, the emerging style adopted a much more tightly organised composition, which reflected m'aat, a complex spiritual concept that embraced order, harmony, balance, truth, justice, and morality. Central to m'aat was the organising principle of duality. Day is separated from night, female from male, and earth from heaven, a symmetry that is replicated in most Egyptian painting. (See rare, lifelike portraits of Egyptians who lived thousands of years ago.)

During the Old Kingdom, artists began using a grid system to create their works. Mapping their work onto it ensured correct figure positioning and proportions. At this time, artists also began using a technique called sunken relief, in which outlines would be etched into plaster and then painted, a technique that provided the flatness of the artwork with a degree of light and shade. Many fine specimens of their works were found in the royal tombs of Saqqara, near the ancient capital of Memphis.

As the age of the pyramids drew to a close, Egypt underwent a period of transition that lasted until around 1975 B.C., the beginning of what became known as the Middle Kingdom. The traditional painting style flourished and slightly evolved to feature cleaner, simpler designs. 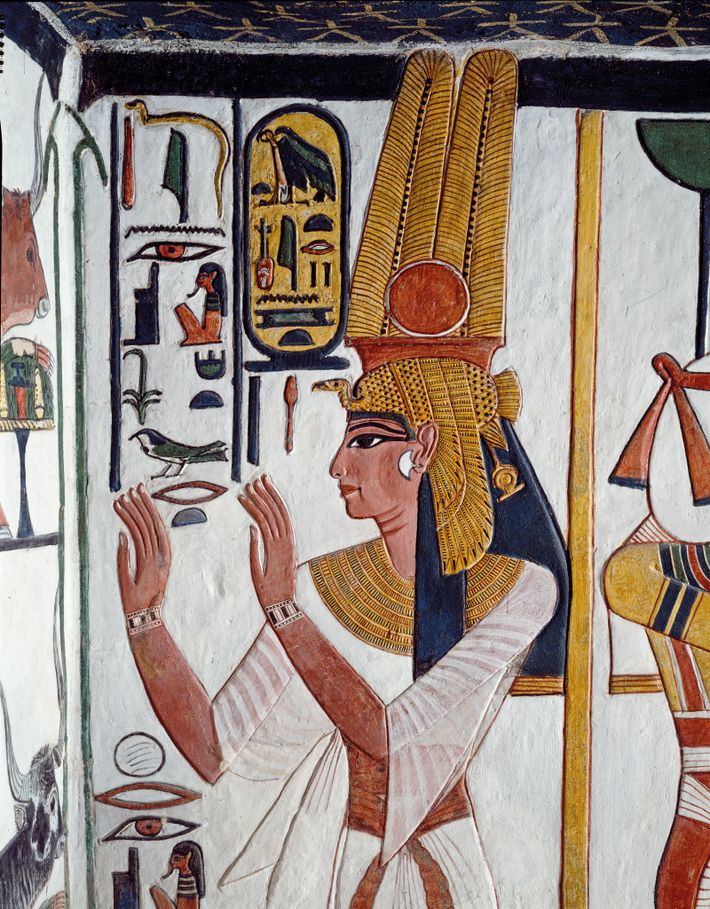 Nefertari's face is rendered with shading to add depth to the figure, an unusual practice in Egyptian paintings.
Photograph by ARALDO DE LUCA

Egypt's New Kingdom, starting around 1539 B.C., was a time of expansion and imperialism. Massive royal monuments, palaces, and temples provided artists with enormous new "canvases" to feature their work.

During this period of growth, Egypt experienced a religious and artistic revolution led by Pharaoh Akhenaten, who replaced the old pantheon with worship of one god: Aten, the sun disc. Akhenaten moved the capital to Amarna, and the art produced during his reign was dubbed "Amarna style." People were represented with elongated heads, luscious lips, protruding bellies, and thin legs.

After Akhenaten's death, his new theology and art were abandoned; artists quickly returned to the traditional style and the old gods. Although Tutankhamun reigned for only a few years after his father Akhenaten's death, the rapidity with which the old gods, and the old style, had been restored is evident in the art of his famous tomb. (Here's how a stubborn archaeologist found the lost tomb of Tutankhamun.) 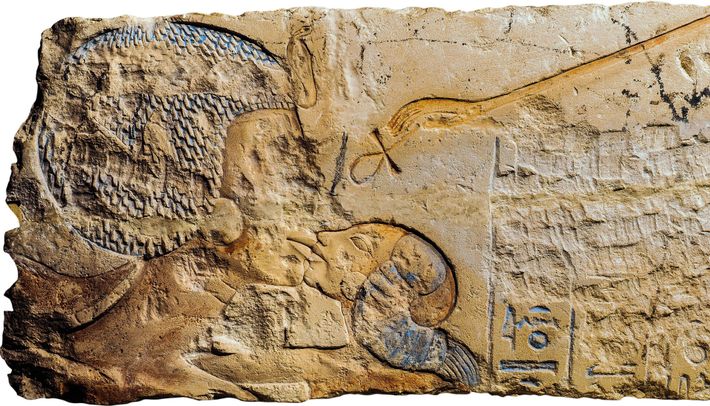 In a relief from Amarna, Queen Nefertiti embraces and kisses her eldest daughter, Princess Meritaten, as both are blessed by the rays of the god Aten.
Photograph by SCALA, FLORENCE

Once reestablished, the traditional style became the vehicle for proclaiming Egypt's imperial supremacy. Egypt reached new heights with the reigns of Seti I and Ramses II. Tombs from this era glow a rich gold, a colour associated with the incorruptible flesh of the gods. The New Kingdom tombs of Seti I and Queen Nefertari feature myriad depictions of the afterlife. Encounters between the deceased and the gods are revealed in stunning colour.

Egypt's iconic art would last well into the Ptolemaic Period, after Alexander the Great conquered Egypt in 332 B.C. The leaders that followed, including Cleopatra the Great, embraced Egypt's glorious past, depicting themselves in the same style as the pharaohs of centuries past.

Egyptian artists made their paints from the materials that surrounded them. Black was obtained from charcoal, soot, or burned bones. The colour was associated both with death and life—partly, perhaps, because it was the color of the life-giving Nile silt. Blues symbolised fertility and birth, and greens were used for the afterlife; both were made from copper oxides. Yellows (the sun) and reds (symbolising both fire or danger and destruction) were obtained from ochre, which was abundant in the desert. (Europeans would later use pulverised Egyptian mummies to create their pigments.) 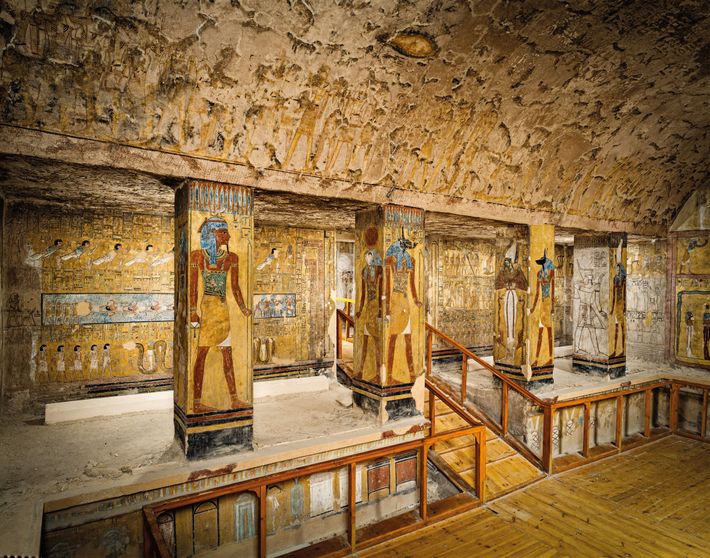 Egyptian rulers lavished funds on the best painters for their tombs. The image shows the second burial chamber intended for the 19th-dynasty queen Tausert, who later ruled as pharaoh in her own right. Scenes on the rear wall are from the Book of Gates, a funerary text about the soul's passage through the underworld.
Photograph by ARALDO DE LUCA

These substances would be ground into powder, then mixed with water and a little vegetable gum. Egg albumin and wax served as a fixative. Painters could decorate stucco, papyrus, and wood having treated the surface beforehand with a layer of mud or gypsum plaster. To apply the paint, they used a simple calamus, a reed like that used by the scribes, but with the tip clipped so as to retain the paint.

Painters belonged to workshops arranged according to a hierarchy. No one artist would ever claim authorship of a work as complex and prestigious as a tomb painting; it was a team effort. One artist would design the overall composition; others would then carve the reliefs. Craftsmen would add details before colour was applied in the last stage of the artistic process.

Life on the grid

Studies of tomb art at the necropolis of Saqqara revealed not only the beauty but also the ingenuity of Egyptian artists in the Old Kingdom. In these early tombs, artisans would prepare the "canvas" by applying a smooth layer of plaster before the artists would begin creating their paintings. The uniformity and style struck 19th-century Egyptologist Karl Richard Lepsius, who was the first to notice that these tomb paintings depicting human figures were designed using a grid, a tradition that continued throughout Egypt's long history. 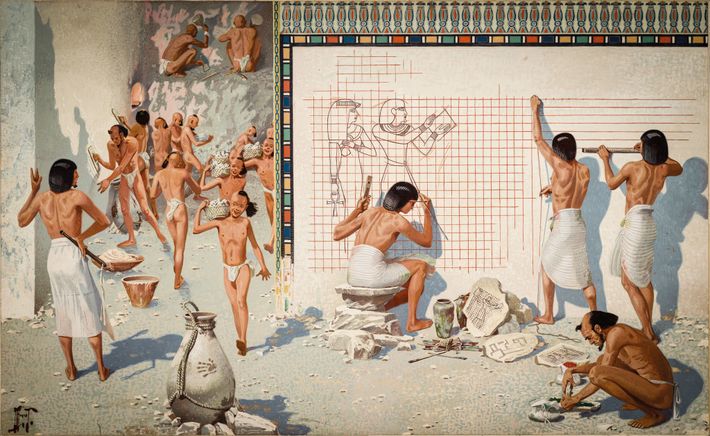 Egyptian artisans prepare the walls of a tomb for decoration. Plaster is applied and smoothed (left), as pigments are prepared (lower right). After the plaster has dried, grids are mapped on the wall, and then figures are sketched following a master design.
Photograph by HERBERT M. HERGET/BRIDGEMAN/ACI

Archaeologists have found the earliest use of the grid in the Third Dynasty, during Egypt's early dynastic era (ca 2950-2575 B.C.). The grid helped ensure that the figures and objects would be rendered consistently with little variation in proportion and positioning. Artists typically created a map with 18 rows of squares. A smaller master document would be sketched, and then artists would map the work onto the larger surface.

Some tombs, such as Pharaoh Horemheb's at Saqqara (built ca 1332-1319 B.C.), feature splendid finished works as well as unfinished paintings. These "works in progress" have given scholars valuable insight into the artistic process and the many steps, revisions, and contributions that went into creating the spectacular finished pieces.

Akhenaten disrupted traditional artistic style when he replaced Amun, the principal god of Egypt, with the solar deity Aten during his reign between 1353 and 1336 B.C. Unusually for an Egyptian god, Aten had no human form and was represented as the solar disc. In a further break with tradition, Akhenaten founded a new capital, Akhetaten, on a site today called Tell el- Amarna.

This religious revolution altered all orders of society, including art. As part of the new "Amarna style" (as it came to be known), representation of the human figure changed radically. In contrast to the traditional style, the pharaoh was represented with skinny arms and legs, a plump belly, and an elongated head. Depictions of the pharaoh and his family adhere to this new style, which is more languid and fluid than the iconic Egyptian style of dynasties past. (Archaeologists have discovered the purpose of pointy "head cones" depicted in Egyptian art.) 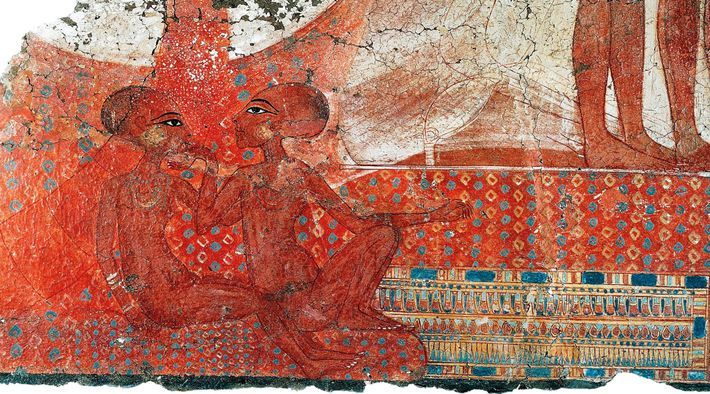 Archaeologists have had to piece together details of Akhenaten's reign because his name was struck from history and his images desecrated after his death. Tutankhamun, Akhenaten's son, was named Tutankhaten (image of Aten) at birth. His name was later changed to Tutankhamun (image of Amun), which shows how quickly Egypt restored Amun to supremacy. This is also reflected in the traditional art and iconography discovered in Tutankhamun's famous tomb.