From the Archives #21 | Kelsey Museum

"I am very pleased to announce that Terry Wilfong has generously agreed to serve as Director of the Kelsey Museum of Archaeology effective June 1, 2017 through June 30, 2020."

With these words, LSA Dean Andrew Martin announced to the Kelsey Museum community that Professor Terry Wilfong, longtime curator of Graeco-Roman Egyptian Collections at the Kelsey Museum, would assume the responsibilities of Museum director. Terry follows a long line of distinguished directors of the Kelsey Museum. Each director furthered the mission of the Museum in their own right, making the institution stronger and a greater presence on the University of Michigan campus and around the world. Without each of these strong leaders, the Kelsey would not be the institution it is now. To each of these we owe a great deal of gratitude.

In honor of the news and Terry's appointment, this month's From the Archives presents this B&W image from the 1990s, though no date is associated with the image. It was found during routine cleaning in the archives. Its appeal as history of the Museum and its staff made it an easy addition to the photographic archives (KAP00007).

In the image, we see Dr. Wilfong, perhaps not long after he was hired by the University of Michigan as professor and curator. He is standing in front of the some displays we had in Newberry Hall, long before the Upjohn Exhibition Wing was even dreamed up. In those days, the Kelsey was constricted in exhibition space and possibilities.

Since this photograph was taken, there have been many changes. The Museum has a new building, our staff has grown in numbers, and our reach has expanded with more exhibitions and outreach and excavations. Terry has earned tenure, reached the level of full professor, and now is director. Both have grown together, and much of the Kelsey's success during that time can be attributed to Terry's efforts.  With Terry's directorship, we are excited about the upcoming years. 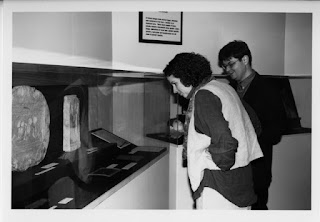